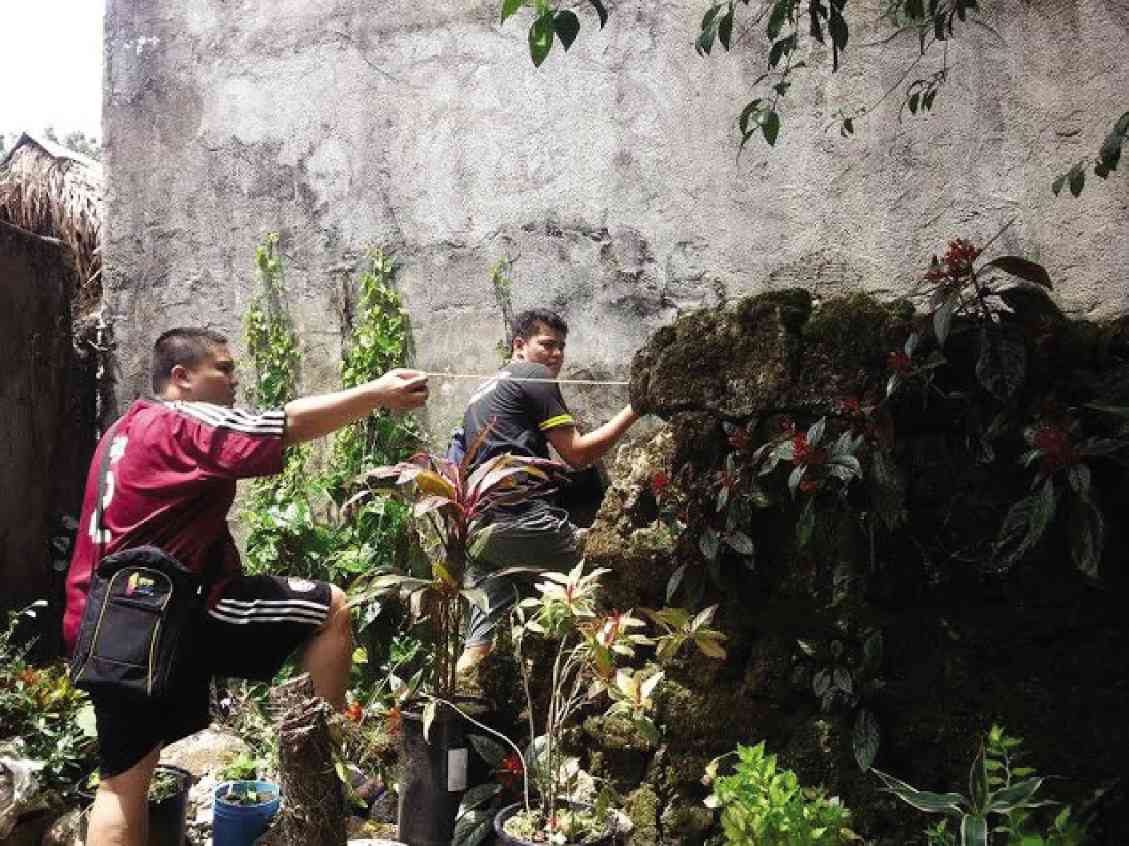 MEASURING a portion of the wall PHOTOS BY EDGAR ALLAN M. SEMBRANO

On an island prone to tropical cyclones, few would possibly think vestiges of its Spanish colonial past still exist.

The town of Polilio, on the island of the same name east of the Quezon province mainland, boasts relics of its ancient past; they are an indicator that Polilio was once a “walled town” similar to Intramuros in Manila but smaller in scale.

Called by locals as lumang pader (old wall), the fortification was built in the 18th century to thwart pirates raiding the town, said Antonio Salumbides Jr., a faculty member of Southern Luzon Sate University in Lucban, Quezon, and a doctoral student in history of the University of Santo Tomas Graduate School (USTGS). He is doing research on his dissertation on Polilio’s history.

Built of locally sourced materials such as coral stone and river stone, the wall enclosed the town, including its fortress church built in 1734, decades before the construction of the fort.

And while the fort fell into disuse and was neglected all these years due to urbanization, the church was destroyed between 1954 and the 1960s to give way to the construction of a new church nearby.

Today, sections of the fort walls and the four watchtowers are still there albeit in ruins. Left to the old church are the back and left side walls.

Regalado Trota José, church- art historian and archivist of UST, expressed surprise at the “discovery,” saying previous research on the island did not yield any findings of the old fort.

“There are no historical data on the fortification, although [historian Bruce] Cruikshank includes a report of 1832 mentioning the town being walled in stone with towers [castillejos] in the corners,” said José, adding that the walls might have been put up after a massive pirate raid in the 17th or 18th century.

“Polillo must have served as a complement to the port at Binangonan de Lampon [today’s Infanta] as early as 1656, in which year a fiscal in the Audiencia of Manila argued for the Manila galleon to dock here instead of at Cavite,” added José, a former commissioner of National Commission for Culture and the Arts.

Salumbides said that because of the frequent Moro raids, the town’s principales, naturales, and gobernadorcillo made a petition to Governor General JoséFrancisco de Obando in 1750 to exempt them from paying taxes for five years for them to build “measures to counter the raids.”

The petition was approved but only for three years, and the taxes collected on those years were used to construct the fortification.

Salumbides, who is extensively documenting the town, recently tapped the USTGS-Center for Conservation of Cultural Property and Environment in the Tropics (CCCPET) for a cultural mapping of Polilio so as to document the island’s built, natural, movable and intangible heritage.

“I don’t see the depth of their appreciation because they think this is just a mere structure and just an obstruction,” Salumbides said.

Salumbides urged that the old structure be preserved and conserved since the intramuros is a cultural treasure of the town.

Through the cultural mapping, the identity of the place is going to be defined, its tangible and intangible cultural heritage identified, and the people will have pride of place, he explained.

During the cultural mapping, the UST team headed by Eric Zerrudo noted the wooden crucifix of St. Joseph Church and calculated that the antique item might have been made in the 18th century.

Photos of the crucifix were shown to another church-heritage historian, Fr. Rene Javellana of Ateneo de Manila University, who agreed with Zerrudo.

“It’s not a classical revival as a 19th-century [cross] would look,” he said. “It looks 18th- century, very poorly painted, overpainted. A good santo-maker can restore that crucifix and bring out the details. The treatment of the hair and face is very Hispanic.”

Polilio Mayor Cristina Bosque admitted the townspeople were not aware of the significance of the walls. She admitted she herself had not been aware of its importance.

She welcomed the cultural mapping of the island. She said this would set direction to the town’s cultural and tourism planning.

Bosque also said they would be building a museum using data gathered from the cultural mapping.

Solomon Coralde, teacher at the Mt. Carmel School of Polilio, urged the remaining structures be preserved so as to define history and identity of the townspeople.

“Pahalagahan na sana at hindi na gibain [The structures should not be demolished and be appreciated instead],” he said.

Coralde also urged that the ruins be marked like the other historical and significant structures in the country.

In Infanta town, lack of awareness by the people of their heritage was also noted during a recent visit by the USTGS team headed by Zerrudo, CCCPET director and former Metropolitan Museum of Manila head.

The team, together with Salumbides and Infanta local government officers, inspected what used to be the old cemetery of the town called Sementeryo ng Kastila.

Now located on a residential area, there are still remnants of the old cemetery such as the brick gate and perimeter walls, including the ruins of a chapel made of bricks and adobe.

“Too bad that they do not appreciate their heritage,” said heritage advocate and Letran instructor Jame Monren Mercado.

Mercado, a member of the USTGS cultural mapping team, noted the importance of education in heritage appreciation, observing that Infanta had strong tourism potentials.