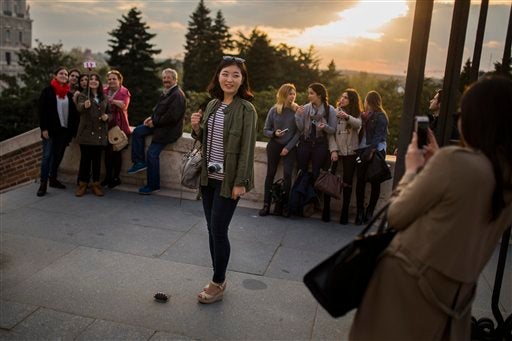 In this picture taken Friday, April 10, 2015, a South Korean tourist poses for a photo taken by his friend in front of the Royal Palace in Madrid, Spain. AP

European vacation as much as 25 percent cheaper due to euro

LISBON, Portugal — Vacations in Europe have a new attraction: the euro’s steep drop in value is making the continent much cheaper for tourists from across the world, especially the United States and China.

For American tourists, the dollar’s strength translates into a discount of around 25 percent compared with this time last year. China’s currency has risen some 20 percent against the euro over the past year.

And eurozone residents feeling the pinch from their sluggish economies are more likely to stay inside the bloc, where they won’t feel the currency changes.

That means the ingredients are in place for “a great year for tourism” in Europe, says Nick Greenfield, head of tour operator relations at the London-based European Tour Operators Association.

The euro has fallen against many currencies in recent times, but its drop has been particularly pronounced against the dollar. The euro was trading at $1.057 on Wednesday, having been as high as $1.40 a year ago. Tim Cooper, a global economist at BMI Research in London, says his company expects the euro and dollar to reach parity later this year.

The European Central Bank’s policies have been weakening the euro, while those of the U.S. Federal Reserve have been bolstering the dollar. The euro has also been dragged down by fears over Greece’s debts and the bloc’s muted economic growth.

U.S. bookings to some European countries have risen by up to 20 percent so far, European tourism officials and American travel companies report.

Lyssandros Tsilidis, president of the Hellenic Association of Travel and Tourist Agents, said Greece has seen a 15-20 percent increase in reservations from the U.S. — Europe’s biggest long-haul market — compared to the same time last year. Spain saw a 12 percent increase in January and almost 19 percent in February. Officials anticipate more growth, which they attribute to the dollar’s strength.

The exchange rate “certainly makes things easier to enjoy,” said Bob Homeyer, a retired businessman from San Diego on vacation in Madrid with his wife. “We have had some fine meals for what worked out to be reasonable prices, and our visit to the Prado Museum worked out at 7 euros ($7.48) each, which is a real bargain,” he said outside the Madrid landmark.

Among individual cities, Paris is a top attraction, pulling some 10 million Americans tourists last year. Officials hope to make it 11 million this year — and “encourage them to spend more” while the exchange rate is favorable, says Francois Navarro, general manager of the city’s tourism committee.

If trends hold, Navarro said, Americans could well return this year to the top spot among foreign tourists in the Paris area — for the first time in about a decade. “It’ll be a big deal,” he said.

But a new generation of Chinese tourists is shaking up Paris’ forecasts, Navarro said. They’re aged 25 to 40, travel alone, and spend on high-end hotels and restaurants, unlike the previous generation that wanted mainly to shop. And a Chinese visitor spends four times as much on average as Americans.

The United States is also the biggest source of tourists for Rome, which recorded a 7 percent increase in American visitors in January, the latest figures available, compared with the

Vacationers have a broad variety of options to choose from: the eurozone encompasses countries from Portugal to Finland and from Greece to Ireland.

The company compared room prices this year in Paris, Rome, Barcelona, Amsterdam and Berlin with last year’s prices, using the euro-dollar exchange rate last month and in March 2014. It concluded that the average price in U.S. dollars for a night in a 4-star hotel in those cities is 21 percent lower, and down 17 percent for 5-star accommodation.

That means, Booking.com calculates, that for the price of seven days in Palm Springs, an American could spend 14 days in Barcelona.

Vacations in Europe are “not only affordable, but even a relatively inexpensive option in comparison to some pricier U.S. destinations,” Moscone said in emailed comments to the AP.