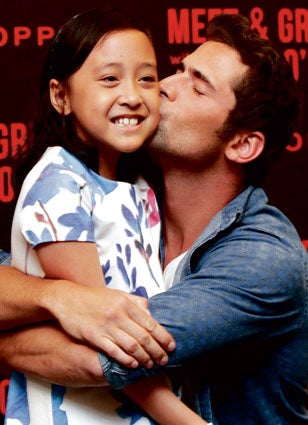 EIGHT-YEAR-OLD Martina Elise Tan gets a kiss from Sean. PHOTOS BY ALANAH TORRALBA

Screams and tears for Sean O’Pry

Earlier that day, 50 winners of Penshoppe’s Meet and Greet contest, an online raffle for Penshoppe Card holders, had the chance to talk to Sean and have photos taken with him.

“Grabe,” Alyanna Mae Co Dungka, an 18-year-old Computer Science student from the University of Santo Tomas, said, breathless and visibly shaking after meeting Sean. She had given him a gift—a tarsier magnet. “When they announced the contest on Penshoppe’s Facebook page, sumali agad ako kahit hindi ako swerte sa contest.”

But luck was on her side this time. “Tumalon-talon ako,” she said, recalling the midnight she found out she won.

Another winner, Philip Michael Peñarubia, has been a longtime fan of Sean. “I’ve been following him on the Internet, even before Instagram, since he started when he was 18. I like his style. He’s very good-looking.”

Martina cried when she met Sean. Sean kissed her cheek. Sofia said, “He seems like a really nice guy.”

Nice—it’s a word that’s been used again and again to describe Sean.

“He’s so nice,” we heard everyone say—the journalists who interviewed him, the people at the press conference where he, in an unplanned moment, got off the stage, shook hands and took selfies with everyone.

(READ: Sean O’Pry in the Philippines: “I don’t know how I’m ever going to leave”)

A girl ran into the function room at the SMX Convention Center, afraid that she had missed the meet-and-greet, saying, “I thought I was late! I was on the bus for three hours!”

When she asked him to pose with several fan signs, Sean said, “Sure. You rode a bus for three hours. I’ll do that for you.”

We agreed: “What a great guy!”

No one knows this more than Jeff Bascon, Penshoppe’s brand director, who spent four days with Sean in El Nido. “What I like about Sean is, with him, what you see is what you get. When we shot his campaign in the States, I knew he was a cool guy. But when I spent more time with him, I got to see unguarded moments, and you can tell that he’s a genuinely nice guy, a really smart guy,” Jeff said.

In Palawan, he refused to let his Filipino security guy eat at another table. “Why are you there? Come sit with us!” Sean told him, insisting that they eat together at every meal.

He was also kind to the the staff at El Nido, saying “Salamat po,” every chance he got. “He kept trying to learn Filipino phrases,” Jeff said. “He’s interested in the culture, he would ask all these questions, he respects who we are. Even with the food, he was so adventurous. He knew that his visit to the Philippines was going to be good, but he didn’t expect to be blown away. I’m sure after everything that happened, he is now an ambassador of the Philippines.”

Watch this video of Sean trying to speak Filipino: