The day I went topless on the LRT | Inquirer Lifestyle ❮ ❯ 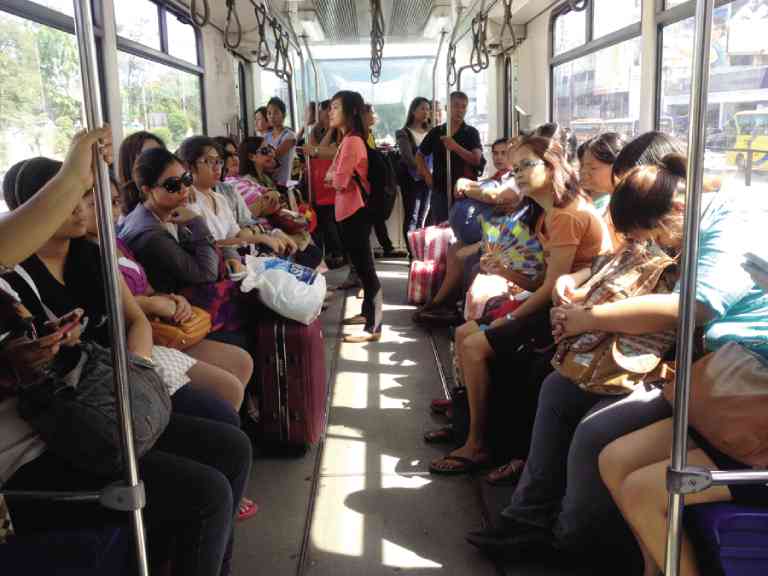 KNOWING the correct exit from the MRT or LRT can make a world of difference when walking to a destination that is on either side of amajor road.

The day I went topless on the LRT

I had just started commuting in Metro Manila when, like a bad dream, I found myself naked on the Light Rail Transit (LRT).

It was a Friday, payday. I wanted to meet friends at Greenbelt for drinks around 6 p.m. The traffic was already at a standstill, so a taxi from Malate to Makati was out of the question; I had to commute.

Commuting in Manila is an acquired skill. It takes an intrinsic knowledge of formal and informal transportation networks to move from point A to B.

My approach was to just jump in and wing it.

That Friday, I started with a pedicab. The driver complimented me on my new outfit, a long black dress with brass buttons from the collar to the hem.

He biked past the market, rank with fresh fruit, past the elementary school where kids ate squid balls outside, to the LRT train station. He said goodbye with the usual, obligatory “Ingat,” wishing me well; he also added a thumbs-up, maybe sensing I needed a vote of confidence.

I wiggled into a nonexistent sliver of space in the coach for females, then the door almost closed on the tip of my nose.

I don’t consider myself tall, but somehow I towered over a hundred shiny black heads of hair.

I felt lucky to grab onto one of the few poles. Most of the handlebars were missing and, when the train suddenly halted, a dozen hands clamped to every inch of my arms, twisting my skin.

I winced in pain but tried to conceal it with one swallow when I saw giggling, powdered faces gazing back at me. One of the women wore a shirt that said, “Never Give Up.”

When we reached the last stop, a wall of people awaited and I could feel commuters on both sides bracing themselves as we faced each other down through the doors.

People were red in the face. It was the end of a long work week and they didn’t want to wait for the next train; they were hot and wanted to get home to their families as soon as possible.

The doors opened and the wave of desperate commuters rushed in before we had a chance to exit.

My politeness quickly escalated to pushing and shoving. I managed to inch toward the door. The departure alarm was already sounding loudly when I took a final, determined stride from the car to the platform; “Never give up!” I thought.

As I heaved myself forward, my dress caught a woman’s purse and the momentum ripped it completely open. All 30 buttons from the top of my dress to the hem popped out of their holes, and I stumbled out of the car topless, in just my underwear.

In seconds, the flock of women from the groufie encircled me. Some stood guard, while others swiftly buttoned my dress (and my dignity) back together.

I’d like to say the rest of the trip was smooth, but the MRT broke down, and we had to exit the station and I found myself clueless on Edsa.

Unknowing, I jogged beside moving buses, waving my arms and shouting “Greenbelt 5?”—until a man informed me where to catch the right bus. I then walked an overpass and through three malls, asking directions from security guards along the way.

I arrived disheveled, but early. Everyone else was stuck in their cars or a cab.

I love cities because I love to have choices—of food to eat, people to talk to and places to explore. I want to enjoy everything Metro Manila has to offer, and I need a menu of options to do so.

In that sense, Manila has redefined what it means to be multimodal. If one mode of transport doesn’t pan out, another is available to bridge the divide.

The light rail is not running? Find a bus. A bus once broke down on McKinley Drive, so I got out and hopped on a motorcycle. A taxi can’t pass a flooded street? Find a pedicab. No pedicab? There’s probably a jeepney. No jeepney? Take an FX. The train runs only every hour? There’s a makeshift cart that can roll you along the tracks to the next station.

Because we have a variety of modes of transportation to choose from, I can access any part of the city and I’m rarely stranded.

I feel highly mobile here compared to other places I’ve lived in, like Washington DC, New York City and Madrid, where large parts of the city are accessible only by one train or bus line and if you miss the bus or train, your only option is to wait, walk or get a cab, which will cost you, sometimes heavily.

We aren’t connected well, but we are well-connected. We need to improve and link these different modes so that together they provide an efficient, safe, affordable multimodal transportation system. Then commuting will be less of an obstacle course.

Meanwhile, since my raw exposure to the public transport system, I’ve learned how to create a more reliable experience.

I have a stored-value ticket for the MRT and LRT to avoid lines. I stick to the middle cars, because they tend to be less crowded, and if possible I try to avoid rush hour or plan my meeting venues so I’m moving counter to the traffic.

A hand fan is absolutely necessary for prolonged waits on the platform.

The hardest part is learning new routes. To do this, I ask a lot of questions. I use landmarks instead of street names when inquiring about directions.

Knowing the correct exit from the MRT or LRT can make a world of difference when walking to a destination that is on either side of a major road.

You can wing it like me and haphazardly figure out your next move, but there are also more tools out there to help you plan a journey.

Sakay PH, a new mobile app, maps the fastest route in an instant, considering the whole gamut of transportation modes. The website TripBarker includes information on weather, events and points of interest along with your best route.

Public transport forces us to be close together, en masse, and sometimes that exposure makes us feel vulnerable.

We live in cities to be together, and this extends to transportation.

In a car, there’s no one to take groufies with and there’s no one to come to your rescue when something goes wrong. We need public transport to move around more efficiently and also to experience what makes cities special—each other.

What Grace Poe saw when she took the MRT