Exciting week: Much is riding on the success of Madrid Fusion Manila | Lifestyle.INQ ❮ ❯ 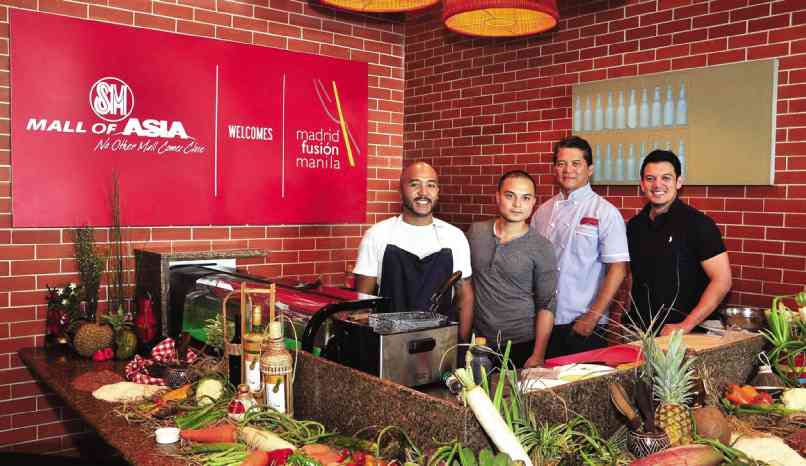 Exciting week: Much is riding on the success of Madrid Fusion Manila

This is the first time in 13 years that the annual food conference is held outside Spain.

Spain’s long history with the Philippines was one of the reasons behind the partnership. But chef Margarita Fores says it is also because Filipino food is finally starting to be noticed.

“It’s been a real challenge for us in the industry. We’ve always been perplexed why our cuisine has never really taken off. Now, it’s reassuring that there have been a lot of features in foreign magazines on our chefs who have been under the radar but are now making their mark,” she told Inquirer Lifestyle.

That the three-day event (April 24-26) is taking place at all is due to the efforts of Fores, who suggested to Tourism Secretary Ramon Jimenez Jr. that they partner with Madrid Fusion organizers.

Upon the invitation of her former classmate Mielle Esteban Powell several years ago, Fores attended Madrid Fusion and was struck by the experience. Powell works at Arum Food & Wine Consultants, one of the event’s organizers.

“Madrid Fusion is the premier food congress in the world. For its organizers to decide to hold its first edition in Asia in our country says a lot about how Filipino cuisine and culture are coming to the forefront in the eyes of the world,” Fores said.

She is optimistic that the foreign media covering the event will spread the word on Philippine food and hospitality.

She hopes that the attention Madrid Fusion Manila is attracting will bring in more tourists eager to sample what the country has to offer.

“It’s an exciting time for Filipinos, it’s a life changer for the industry. What’s nice about Madrid Fusion is that it scopes out the next big thing—these young chefs who are creating a buzz. It’s our time. We’re in the spotlight,” she said.

One chef with a slightly different point of view, however, is JP Anglo of The Sarsa Group. In the press conference last week for Madrid Fusion at Sarsa, his restaurant at SM Mall of Asia, Anglo told Inquirer Lifestyle that “we should focus on the ‘masters,’ not the weekend warriors or the amateurs.”

Anglo pointed out that efforts should be made to look for and highlight the local lechonero (lechon roasters), the makers of batchoy, kansi, adobo and pancit palabok who are hidden in the provinces.

“Imagine having a street food festival with the best of them under one roof like Singapore’s hawker stalls,” he said. “We should do more of these festivals.”

Still, Madrid Fusion Manila could give Filipino food the boost it needs to make it in the global market.

People understand and appreciate Thai food because it has standards of preparation adhered to, more or less, any part of the world.

Fores feels Madrid Fusion Manila is a step in the right direction.

“If you can translate the profile of a certain cuisine and make the foreign palate understand it quickly, I think we can fast-track the process and bring a cuisine to the forefront,” she said.