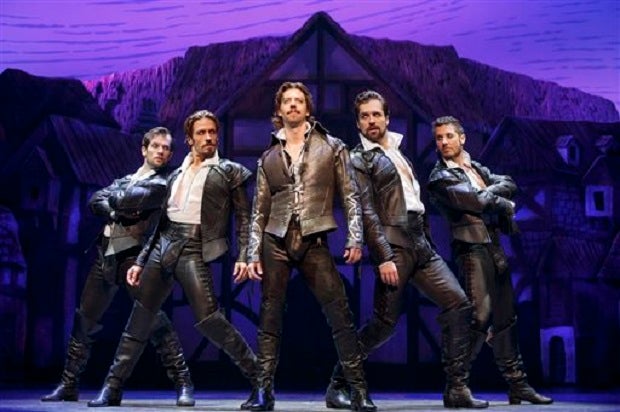 This image released by Boneau/Bryan Brown shows Christian Borle, center, during a performance of "Something Rotten," in New York. AP

Review: Everything fresh at hysterical ‘Something Rotten!’

NEW YORK — The first sign that things might go a little nutty at “Something Rotten!” is in the second song when William Shakespeare is called, well, a “little turd.”

The Bard is mocked as “the poster child for why no one should ever procreate” and “a hack with a knack for stealing anything he can.” Those are some of the lyrics to the song “God, I Hate Shakespeare.”

The mighty St. James Theatre, where Helen Hayes herself starred in “Twelfth Night” and Maurice Evans played “Hamlet,” has never seen anything like it. You can feel the cobwebs being blown away.

“Something Rotten!,” written by three guys making their Broadway debuts, is fresh and hysterical and irreverent. It’s easily the funniest thing to arrive on Broadway since “The Book of Mormon.”

The comedy, which opened Wednesday, is set during the Renaissance and portrays Shakespeare (a delicious Christian Borle) as an arrogant, rock star playwright. Two brothers — played with charm by Brian d’Arcy James and John Cariani — are desperate to write a hit show in his shadow.

With the help of a soothsayer (Brad Oscar, killing it) the brothers stumble on the notion of writing the world’s first musical. What’s that? “It appears to be a play where the dialogue stops and the plot is conveyed through song,” explains the soothsayer.

“I don’t know, I find it hard to believe people would actually pay to see something like this,” replies one of the brothers skeptically.

That leads to the song “A Musical,” in which the writers get to goof on such shows as “Rent,” ”Pippin,” ”Les Miserables,” ”On the Town,” ”Annie” and the Rockettes.

It’s one of the highlights of a show that is full of them, all led by director Casey Nicholaw at his exuberant, daffy best. There are tap dancing eggs, for God’s sake.

The set is by Scott Pask, which resembles interlocking gingerbread houses, and the costumes are by Gregg Barnes and they’re rich and colorful. (One quibble would be the distractingly large codpieces.)

A stunningly good first act — including Shakespeare at an outdoor concert singing lines from sonnets to swooning fans, and later a tap-off between Borle and James — invariably leads to a somewhat weaker second act, but that’s still better than most entire musicals on Broadway right now.

Two women — Heidi Blickenstaff and Kate Reinders — play the love interests of the brothers and they’re first rate. As is Brooks Ashmanskas, who plays a closeted puritan.

But Borle as Shakespeare seems to be having the most fun of all. He shakes his butt, gets to put on a disguise and plays a preening peacock of a man — “She’s bedazzled. You like that word? I made it up, it’s what I do!” — but secretly battles writers’ block (“It’s hard to be the Bard,” he sings.)

Perhaps the warmest welcome of all should go to “Chicken Run” screenwriter Karey Kirkpatrick, who co-wrote the “Something Rotten!” songs with his Grammy Award-winning songwriter brother, Wayne, and co-wrote the story with John O’Farrell, a best-selling English author.

Their “Something Rotten!” is a valentine to Broadway musicals, written by three newcomers to Broadway, much in the way “The Book of Mormon” introduced two dudes from “South Park.” And this time, thanks to some of Broadway’s best pros — Nicholaw, Borle and James — these outsiders have created something far from rotten. Or a turd. It’s awesome.