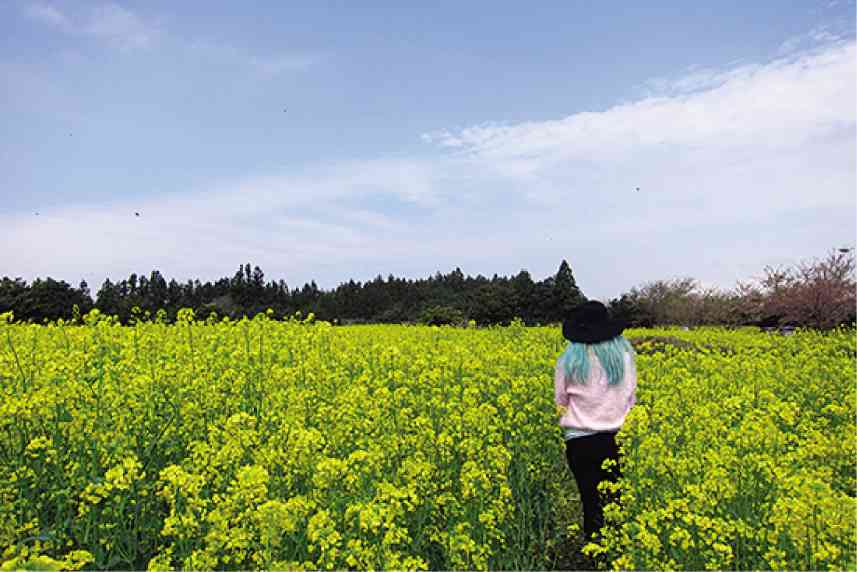 YOU know it’s springtime when the canola flowers coat the valleys of Southern Jeju.

An eyeful of Jeju

There are three things that define Jeju Island, the subtropical honeymoon capital of South Korea: rocks, winds and women.

Volcanic rocks in all shapes and sizes, formed when the island was born after a volcanic eruption some 1.4 million years ago, put Jeju among the world’s most impressive lava formation landscapes. You can even go on a cave-like lava tube tour and explore its musky, dark underworld.

This small volcanic island, in fact—stretching 73 kilometers from east to west and 31 kilometers from north to south—has a total of 368 volcanoes, said our guide Sunny Hong (Korean name: Hong Sang-hee).

Jeju also has a formidable goddess of wind, Yeongdung, who makes her roaring presence most felt every second month following the lunar calendar. Her notoriety has survived the centuries that she is now given a proper farewell ceremony—for good luck—upon her departure (usually on the 15th day).

They say the perennial harsh wind has made its people tough and resilient. And in Jeju, this fierce spirit and remarkable fortitude is seen in its womenfolk. Today Jeju is among the few surviving matriarchal societies  this side of the planet where one can truly say that women, irrefutably, rule.

This is probably the reason Jeju women are unapologetic and brazenly proud of Loveland, a sculpture theme park based on sensuality and eroticism that’s enough to make Vatsyayana’s “Kama Sutra” look like child’s play. Quite possibly the kinkiest theme park in the world—only those 18 years old and above are allowed access—Loveland is, depending on how you look at it, the blunt interpretation of the waggish Korean humor. You’ll leave the park laughing and giggling, or morbidly mortified.

Loveland, the only one of its kind in Korea, has become the favorite destination of honeymooners, said Hong, that they actually come here for sex education. It’s a crash course for the uninitiated, and a what-else-did-I-miss for the old-timers. And if you have children in tow, the park has a playground for kiddies. (No worries, the playground is not R-18.)

Since it took a good hour to walk around the park and check out its museum and gift shop, and it was a frigid, rainy day, we were treated to hot coffee and warm cocoa at the Loveland café that also served, but, of course, penis- and breast-shaped snacks. (In case you’re wondering, they were quite tasty—and filling.)

The next park we visited was rated GP. It takes hours to walk around Hallim Park, a 32-hectare (80-acre) garden with nine themes and two caves. But for a quick stop, our group was given two hours to explore the property.

What took our breath away, however, was the Tulip Garden, which our guide said opened just a few weeks prior. This Dutch bulb that was once so precious it served as currency during the Tulip Mania in
17th-century Europe, is seen here in full bloom surrounding palm and pine trees.

Yellow, red, purple, pink, white, orange and even multihued, the color of tulips you give is said to represent a deeper meaning. You give purple tulips, for example, to your “queen”; white when apologizing; pink when you’re wishing happiness; and multicolored or striped to symbolize your lover’s beautiful eyes.

When spring arrives in southern Jeju Island, the earth is covered with yellow canola blossoms (rapeseed). We were taken to the Seongsan Ilchulbong area where a bed of these little yellow flowers coated its valleys like an impressionist painting, and where the audible buzz of pollinating bumblebees rang in our ears as we made our way across the field.

Another symbol of spring is Jeju’s King Cherry Tree blossoms lining many of its streets and avenues. If Japan has sakura, Jeju has butkot. The flowers of King Cherry Blossoms are supposedly the most luxurious and largest of them all. Alas, we arrived right after a three-day storm in which the mighty wind had already blown away most of its enchanting splendor.

A trip to Jeju, however, is not complete without hiking up  the 182-meter-high Seongsan Sunrise Peak, where the view of the sun rising and reflecting on the crater of this archetypal tuff cone is said to be glorious. The climb of this Unesco World Heritage Site ascends slowly, starting out with long walks on winding ramps, progressing into slightly elevated stairs before ultimately transforming in near 90-degree, insanely steep stairs.

We didn’t need to negotiate on muddy or slippery ground. The trail leading up to the Seongsan Sunrise Peak is well-paved and constructed with sturdy handrails. There are 560 steps leading to the peak, but our hike  turned out to be more rewarding than what we saw, or didn’t see, at the peak.

We climbed after lunchtime, so there was no sunrise—or even sunset—to look forward to. A layer of thick fog obstructed our view of the crater; but we could see the ocean and the rows of grandstand stairs full of chirpy high school students and screaming children were enough to make us want to make our way back down again.

This place is called the sunrise peak for a reason—it means the best time to go up is before sunrise. At the entrance, you’ll find the sunrise schedule for the entire year. The peak opens an hour before sunrise, giving you ample time to climb up to catch the view.

If you have time to sit down and watch a show while in Jeju, better not miss the Joyful Art Performance’s “The Painters: Hero.” Perfect for the entire family, it is a fascinating interactive comedy featuring four artists dancing and creating works of art onstage.

While driving out to see some of the island’s more than 100 museums, we stopped by the Mysterious Road, also called Dokkaebi Road. This lies at the foot of a mountain connecting two major highways. An optical illusion will make objects, including big buses, appear to go up the hill instead of down.

Among the museums we visited were the Teddy Bear Museum, where the works of masters like Picasso and Van Gogh have been transformed into teddy bear art (you’ll also see the teddy bear versions of Steve Jobs, Marilyn Monroe, Michael Jackson, Bruce Lee); Hello Kitty Museum, for fans, where a detailed history of this iconic third-grade British girl is among its exhibits; and Alive Museum, 3D images of masterpieces where you become a part of the art piece.

Since Korea is known for its sweet, succulent strawberries, we also participated in a strawberry picking class where we were taught how to properly pluck the fruit from its stem. The best part of the class was that we got to eat what we harvested, and we also got to bring home our strawberry pickings,  since this activity was made en route to the airport.

Jeju Island is popular for its gorgeous beaches with turquoise blue water, intriguing museums and long coastal hikes—all within easy access. The best time to visit is during its cooler months, to escape from the Philippines’ scorching heat.

Rasko Air Travel & Tours offers exclusive chartered flights to Jeju Island, visa-free, via Philippine Airlines every spring and winter for only $799/pax (all-in, four-day/three-night package). Visit www.raksotravel.com or call 8129667. Rasko Air Travel & Tours is an accredited member of IATA, PTAA and a ticketing agent for more than 30 international airlines. It is certified ISO 9001:2008 QMS compliant with branches in Manila, Boracay, Pampanga and soon in Cebu.