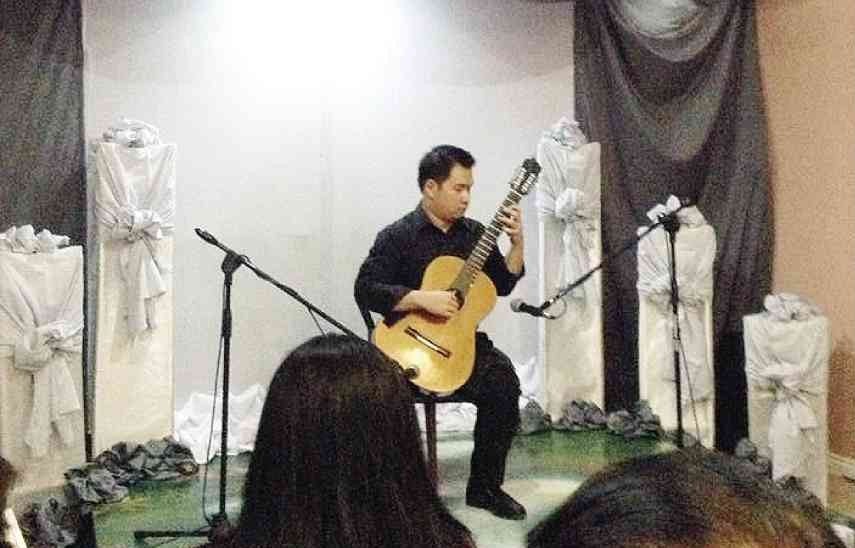 RAMONCITO Carpio with new found island music fans after the concert, among them the family of music teacher Gregorio Sarmiento and his lawyer son Greg GREG SARMIENTO JR.

The classical guitar made its first full exposure in Catanduanes with locals giving prize-winning guitarist Ramoncito Carpio a rousing standing ovation after the end of the technically demanding “Koyunbaba” by Carlo Domeniconi at the Kemji Resort recital hall.

“This is a rare musical experience for us,” said lawyer Gregorio Sarmiento Jr., whose father teaches music.

The elder Sarmiento praised Carpio: “How he made the fingers of his two hands function just as well is a rare sight. How his nails survived that difficult concert is a source of wonder.”

“I loved the recital!” said physician Vietriz Abella. “As I was telling my kids, life is not just being born, living, and dying. Art defines our humanity. You should continue educating the island, art-wise.”

Also applauding Carpio were Minerva I. Morales of Catanduanes State University, and Fr. Juan Lizaso, who delivered a very touching invocation before the concert.

Even the waiters and utility personnel of Kemji Resort raved over the guitarist.

“I was listening to his rehearsal and I thought he made the guitar sound like a piano,” said driver Peter of Kemji Resort, who asked for the guitarist’s autograph on his way to Virac Airport.

The recital also marked the first time the islanders heard a Yuichi Imai 2011 limited-model guitar, of which the lovely strains reached a high point in José Valdez’s Fantasy Variations based on Potenciano Gregorio’s “Sarung Bangui.”

Among the concert’s supporters were Rep. Cesar V. Sarmiento and Jorge V. Sarmiento of the Philippine Amusement and Gaming Corp.

After Fr. Lizaso’s invocation, the audience observed one minute of silence for one member of SAF 44, SPI Max Jim Tria, who was buried in barrio Palta, Virac, Catanduanes, last February.

The well-received concert triggered brisk sale of Carpio’s first solo album “Pahinungod,” which he signed for newfound fans after the concert.

The last time a classical guitar was heard on the island was in 1992, when Lester Demetillo teamed with flutist Antonio Maigue in another well-received concert at the Risen Christ Hall in the capital town.

Aside from Pagcor, supporting the Carpio concert were the National Commission for Culture and the Arts; Catanduanes Tribune; and Catanduanes Provincial Tourism Office under Carmel Bonifacio Garcia.