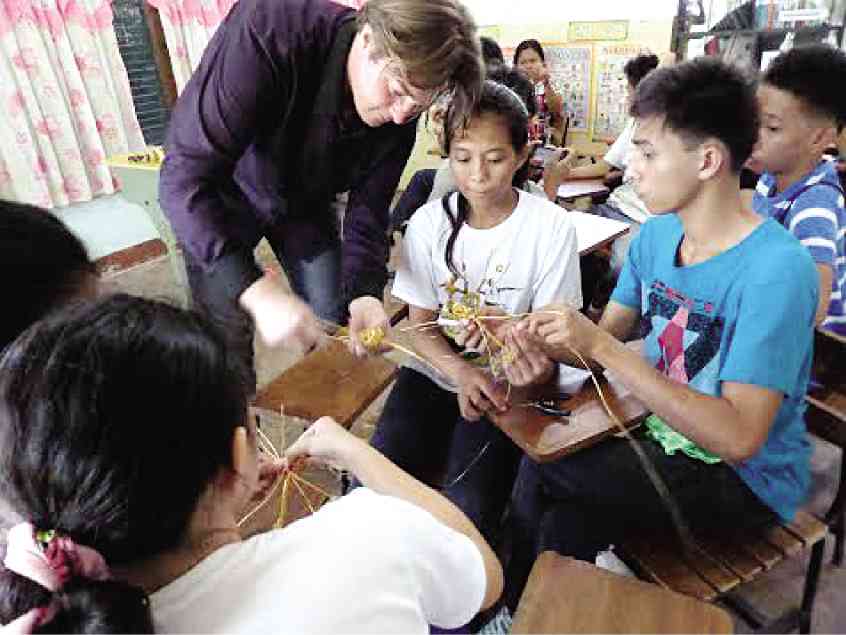 Jankovic, a landscaper-jewelry designer-basketry expert, wanted to teach young survivors of the supertyphoon how to make souvenir items they could sell to earn money. The 31-year-old artist taught two groups of young Leyteños how to make wire angels, a craft that was rooted in his basketry skill.

He hoped learning how to make the wire angels would give the kids a means of livelihood. Also, while he was able to demonstrate only how to make the angels during his brief stay in Leyte, he hoped the skills the children learned would encourage them to make other things using wire.

Jankovic was particularly impressed by how quickly a group of hearing-impaired students of the Santo Niño Special Education (SPED) Center, an elementary school, in Tacloban were able to make their own angels in less than half an hour.

With just a short introduction in sign language from class adviser Ariel M. Velarde and a little demonstration and a few verbal instructions from Jankovic, whose command of the English language was not very good, the children enthusiastically tackled the task at hand, apparently with a lot of bantering as their rapid hand gestures and broad grins suggested.

When Velarde asked them afterwards if they planned to do as Jankovic hoped, earn some extra money making wire products, the children vigorously nodded their heads.

Before the session with the deaf students, Jankovic conducted another workshop for about 20 young people at the Palo Municipal Hall, which was arranged through the office of Mayor Remedios Petilla.

The Catholic Jankovic also gave some Palo parishioners a glimpse of his Christ installation, a collapsible image of the crucified Jesus made completely of wire. The image was on display in the altar during the 10 a.m. Sunday Mass celebrated by Fr. Manny Baybay at the town’s cathedral, now fully restored after its roof was blown away by “Yolanda.”

Jankovic, whose trip to Leyte was coordinated by the office of Sen. Aquilino “Koko” Pimentel III and supported by Philippine Airlines, said the trip proved to him Filipinos “are most religious and hopeful people. They always believe in miracles.”

He said, “I need to learn from them to also have more faith. The trip was worth it because I was able to see the place I just watched [on television] in Slovakia.”

Jankovic said he brought his Jesus because he knew Filipinos would appreciate his art since about 85 percent of the Philippine population was Catholic.

As for teaching the kids how to make the wire angels, he said, “In my own little way, I want to teach them art that they can make for a living.” In addition, for every angel sold, P10 would go to the children.

Mayette Mejia, a travel agency operator who arranged the artist’s trip from Slovakia to the Philippines, said bringing Jankovic to Leyte, particularly with the wire Christ, was part of her own desire to give back to God by promoting greater devotion to Him.

A cancer survivor, she said it was “payback time to God,” who gave her a second life.