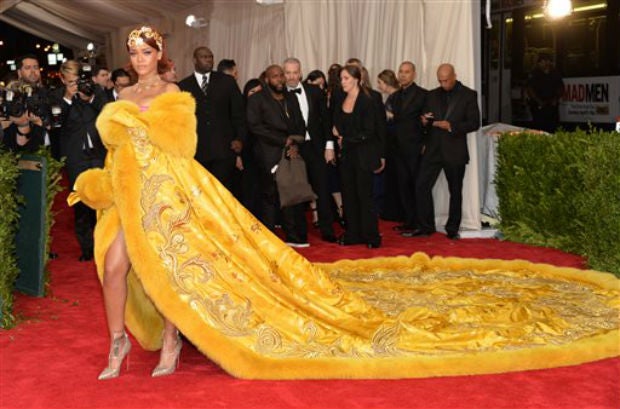 Rihanna arrives at The Metropolitan Museum of Art's Costume Institute benefit gala celebrating "China: Through the Looking Glass" on Monday, May 4, 2015, in New York. AP

NEW YORK—Rihanna took the red carpet Monday at the Met Gala in a fur-trimmed yellow cape with floral swirls of gold and a train so long it required three wranglers.

And a little pink mini-dress underneath. Oh, and a tiara of sorts.

As a latecomer, Rihanna had the grand staircase at the Metropolitan Museum of Art all to herself for her big entrance in the ensemble by Chinese designer Guo Pei.

Deep reds and shimmery golds dominated as the multitudes of invited celebrities embraced this year’s inspiration: the massive Met exhibition “China: Through the Looking Glass,” a lavish look at fashion from the East through the ages.

Anna Wintour wore an orange and red floral couture gown from Chanel in keeping with the theme as she walked up the stairs to kick off the gala that raises millions for her museum namesake: the Anna Wintour Costume Center.

The Vogue chief and doyenne of the fashion industry was followed on the red carpet by the stunning Chinese actress Gong Li, who offered a girlish tilt of her head as she waved in a deep red velvet gown with black lace and a fan design.

Kim Kardashian most certainly embraced the evening’s vibe — in a revealing, low-cut gown with an East motif done by Peter Dundas for Roberto Cavalli, the designer’s first for the house. Little sis Kendall Jenner opted for Calvin Klein, sparkling in green with sexy laces on each side.

Sarah Jessica Parker, who made a splash on the red carpet last year in a custom Oscar de la Renta, donned a fiery head piece with long side tassels that towered high above her black, one-shoulder gown with a long flower-adorned train. There was quilting down one side that separated into a high slit.

Also fiery: Jennifer Lopez in a jaw-dropping red Versace with side panels that left little to the imagination.

Anne Hathaway shimmered in a sleek hooded body-skimmer from Ralph Lauren in keeping with the theme, which was muddled if not completely lost in the beaded top and sheer blush pants worn by Diane Kruger, who tucked a flower behind one ear.

Katie Holmes, in a temporary bob, took Zac Posen’s arm in one of his designs, a sparkly blue gown with cutouts at the back.

From Balmain, Justin Bieber showed up in a black jacket slithering with gold dragons. A bird of paradise adorned the bottom of Dianna Agron’s one-shoulder Tory Burch gown.