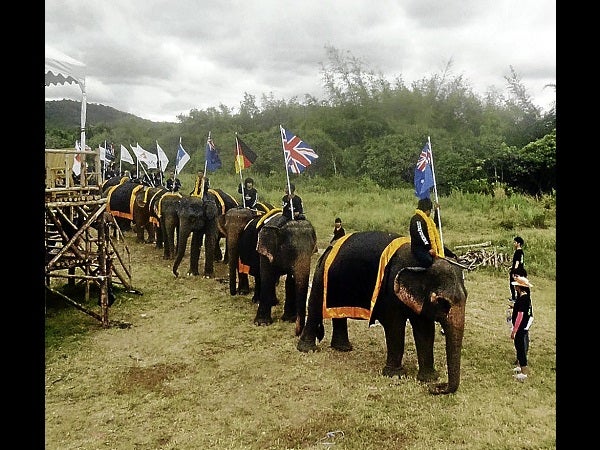 A polo tournament – astride elephants 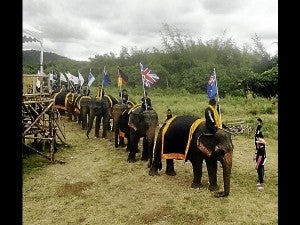 The trip to Hua Hin, Thailand, from Bangkok is a smooth three-hour drive, with roadside scenery that would easily remind one of our very own South Luzon Expressway (minus the unfinished roadwork). The laid-back seaside town, with its white-sand shores and luxury hotels, is just 200 km south of bustling Bangkok—close enough to the city for a couple of nights on the beach.

Last month, Hua Hin was more than a beachside getaway for Thailand travelers. It welcomed jumbo-sized guests, as the town hosted the recent King’s Cup Elephant Polo Tournament by Anantara Hua Hin Resort and Spa. The annual event welcomed an international crowd, all curious to watch the relatively novel sport—with, of course, the elephants as main attraction.

An obvious difference from equestrian polo, aside from the elephants, is the number of riders. Two people mount each elephant: the polo player and the mahout, the elephant’s “driver” and, basically, its caretaker and owner. Elephants employed at the King’s Cup tournament only respond to commands in Thai.

The challenge left for the player is to hit the ball while seated eight to ten feet above the ground on a moving elephant, using a two-meter-long mallet.

Two opposing teams play a 14-minute long game, divided into two seven-minute halves, or chukkas. Six elephants, three for each team, run (more of jog, really) across the 100 × 60-m field as directed by their mahouts, with players aiming to hit the ball into their respective goals. Twelve teams joined this year’s competition.

A whole-day opening ceremony, complete with a blessing, grand parade and buffet for the elephants, preceded the week-long tournament. The blessing was held by Thailand’s last remaining Khru Ba Yai, elephant capturers believed to possess highest spiritual control over the pachyderms. 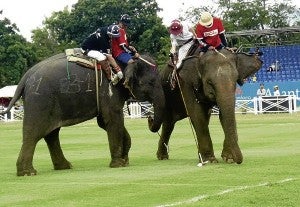 Prayers are offered and a buffalo horn is blown to “call the spirits to tame the elephants, as well as to heal their spirit,” to ensure safety throughout the competition.

Elephant polo has been around since the ’80s, when the World Elephant Polo Association established official rules in 1982. The King’s Cup, however, is only celebrating its 10th year, brought to Hua Hin by its founder, Swede polo player Christopher Stafford, in 2001.

Elephant polo rules are mostly similar to regular polo’s, except for some minor adjustments. Ladies, for instance, are allowed to use both hands when handling the mallet; men, just one. A team with three elephants in one half of the pitch or in the D (the semi-circle with a 20-m radius drawn in front of the goal area) commits a foul.

Elephants are also not allowed to lie down in front of the goal, or pick up the ball with its trunk.

“[The tournament] has just gotten bigger and brighter,” said Stafford. “We are collecting a huge amount of money to help [different] causes.” The number one cause being the elephants themselves, as Thailand is known for having great reverence for the pachyderms. 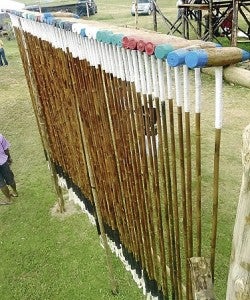 To avoid unwanted fatigue and stress, elephants only play a maximum of two games a day, and are given ample food, water and rest in between games.

Funds raised during the tournament will be donated to the Golden Triangle Elephant Foundation (GTAEF) in Chiang Rai, which helps provide better living conditions and more ethical work for Asian elephants and their mahouts. It is headed by John Roberts, who is this year’s tournament referee.

“We have a camp with 30 elephants which I run. It’s my day job. I don’t play polo or look after elephant polo all-year round,” said Roberts. He oversees elephant treks through the jungle, bathing, as well as mahout training programs.

“We rescue elephants from the streets in Bangkok. We help build houses for mahouts, and they can bring their whole family,” added Taweesak Keereekaew, one of this year’s Thai players, who had worked with GTAEF.

The elephants employed at the tournament, however, do not come from GTAEF’s camp. Most of them come from Surin province up north, where Roberts said there is a problem when it comes to providing elephant food.

“The whole point of elephant [polo]-playing is to bring elephants in who are in a worse-off condition and make it better for them while they’re with us,” he added.

An obvious question, then, is what happens to the elephants now that the tournament is over? 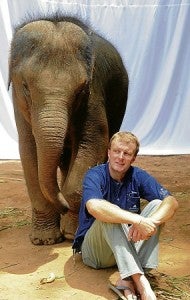 While the match is just a short “vacation” for the elephants, causes to raise awareness and improve elephant conditions—like GTAEF—continue to look for long-term solutions. Until the ideal setting can be reached, which is for elephants to again be able to live in the wild, events like the King’s Cup tournament is one way of helping the pachyderms live a little more comfortably.

When not on the pitch watching elephant polo matches, one should take the time to explore more of Hua Hin. The seaside province boasts of a vineyard, textile printing house, and authentic Thai cooking classes—where you get to eat what you make!

The textile printing house was opened in 1948 by his Royal Highness Prince Bovoradej and her Serene Highness Pajongchitr Kridakorn. It sells a variety of items ideal for pasalubong—bags, clothing, dressmaking fabric, purses, pillow covers and other accessories. Khomapastr, which is the hand-printed cotton material, comes from two words: khom and pastrapon, meaning “white cloth” and “women’s accessories,” respectively. 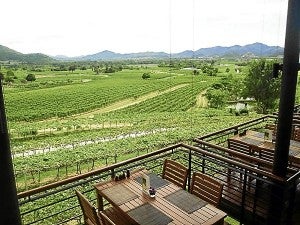 The Hua Hin Hills Vineyard offers a tour of the winery, with wine tasting and pairing. After you’ve had your fill, choose from the wide selection of Monsoon Valley wines to take home with you. For a personalized touch, you can paint your own wine bottle label and have it placed on the bottle of your choice.

Yes, you can copy any recipe you want off the Internet, but Anantara Hua Hin Resort and Spa gives you more than a piece of paper with cooking instructions. You can book an authentic Thai cooking class, complete with a trip to the market to better orient yourself on the ingredients you’ll be using (gives one time to shop, too). A resident chef will guide you throughout the whole session, from salad to soup and main course. The best part? What you cook, you eat, and get a personalized Certificate of Achievement. Annelle S. Tayao