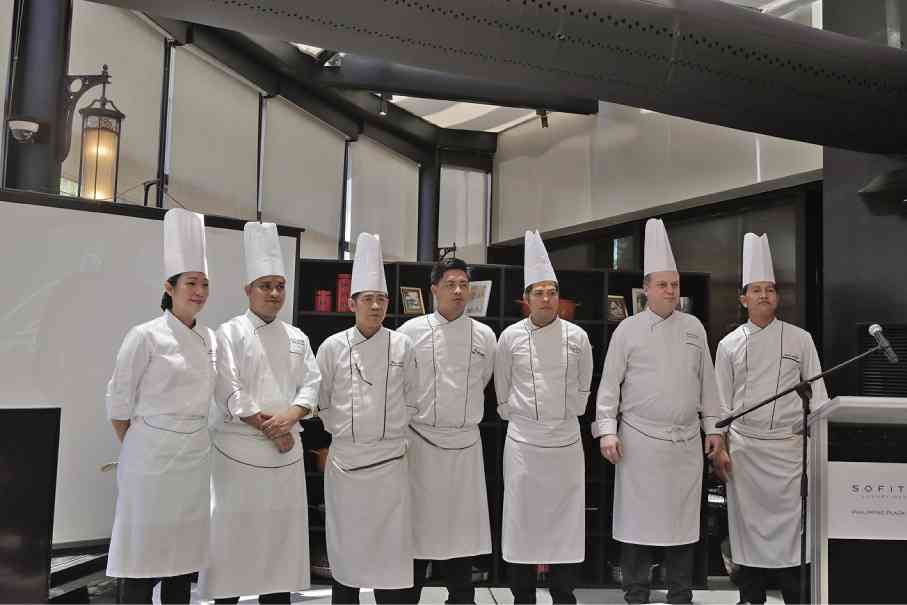 For Mother’s Day, the Sofitel Philippine Plaza Manila asked popular cooks and chefs to share family recipes, which were then interpreted by the kitchen staff at Spiral, the hotel’s all-day dining restaurant.

These were inspired by family vacations spent in France and are dishes from her mother, Dr. Maria Lim-Ayuyao, the youngest daughter of World War II hero Gen. Vicente Lim. Two of the items, the Gravlax and Cream Cheese Cake and the White Chocolate Pots de Crème, are favorites of Manuel’s son Justin.

Back then, she used fresh—not stale—sliced American bread, salted butter and candied pili nuts. For the press preview last week, Montinola served another version of the pudding that was laced with chocolate syrup.

Other recipes she willingly shared with the Spiral chefs include Whole Baked Lapu-Lapu served three ways (with butter, with olive oil and

There was also a pan of Montinola’s meltingly soft Lengua (beef tongue) that was wiped out almost immediately.

Nina Daza-Puyat, the editor in chief of Appetite magazine, describes herself as “a typical homemaker who loves to cook and eat.” She is also the daughter of the late veteran chef and cookbook author Nora Daza. Her list of shared dishes includes a deceptively simple recipe for French Onion Tartlets.

The tiny tasty morsels are actually a combination of the onion tart on puff pastry that she tried at Lutèce in New York and her mom’s French onion soup gratinée, a specialty at the Dazas’ French restaurant, Au Bon Vivant.

Daza-Puyat’s other savories include Portobello Mushroom Fries Served with Garlic Mayo, Fried Mixed Seafood Crepe (lumpiang lamang dagat) with Tartar Sauce, and Chicken Relleno with Giblet Gravy. The solitary sweet is Alfajores, shortbread cookies that are “so delicate, they melt in your mouth,” as she described it.

Guests who join the brunch at Spiral this Sunday (May 10) will have the chance to meet the featured cooks and chefs. Their dishes, however, will be available for lunch and dinner from May 8 to 10 with the restaurant’s other continental and Asian selections.