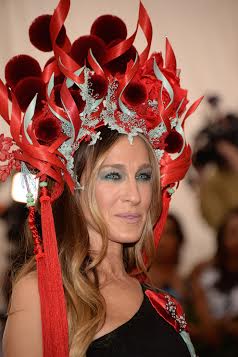 Sarah Jessica Parker in a headdress by Philip Treacy

Near nudity and lusty red at Anna Wintour’s Met Gala

Selfies were banned and yet, within an hour, one billion Instagram and Twitter images were either praising or bashing the red-carpet standouts.

Soon enough, Vogue online and other fashion websites were competing in proclaiming their best- and worst-dressed lists.

Invariably appearing on both lists were  Madonna and Katy Perry, both wearing Moschino by Jeremy Scott, and Lady Gaga in Balenciaga by Alexander Wang.

It was Anna Wintour’s 17th annual Metropolitan Museum of Art’s Costume Institute Gala. Theme of the fashion free-for-all was “China: Through the Looking Glass,” which gave guests  the option either to channel the structure of traditional Chinese wear or simply dress as they pleased.

At $29,000 a seat, the gala  had designers either tackling stereotypical references to China such as the street opera, the cheongsam, Mao collars, frog closures and dragon embroidery, or simply showing from their recent couture collections.

Wintour wore Chanel as usual although Karl Lagerfeld was in Seoul showing his Resort collection.

A lot wore Mandarin red, but unfortunately these gowns disappeared against the red carpet and the Met’s red staircase, such as Helen Mirren in lipstick-red lace.

Other guests managed to address the subject of chinoiserie without overdoing the cultural homage.

The men seemed to have gotten it just right, like the handsome Adrian Brody and Justin Bieber in jackets that looked Liberace in a good way.

New trend was the beaded micro mini dress for the glamorous youth worn best by Dakota Johnson in Chanel.

Black Goth on the Olsen twins was another look.

In the afterparty at the Top of the Standard, couture-clad guests made a beeline for the dance floor as the Cyndi Lauper hit “Girls Just Want to Have Fun” blared.

It summed up the night that combined partying and costume museum advocacy.