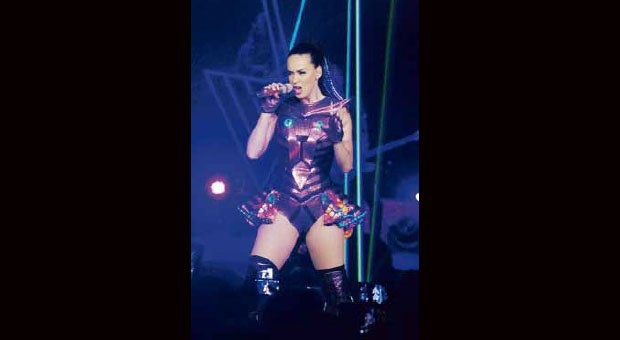 Until a few minutes before Perry went onstage at 9 p.m., long lines of vehicles were seen still inching their way into the venue.

The crowd, composed mostly of teenage girls and middle-income Filipino families, immediately roared into deafening cheers when Perry performed “Roar” for her first number, a worldwide hit from her 2013 album “Prism,” whose ongoing Prismatic tour included this Manila gig.

The show itself was a visual delight, a graphic extravaganza with touches of Broadway musicals that might have been inspired by the 30-year-old American singer-songwriter’s penchant for playing quirky characters. Every song, in fact, presented specific themes; in “Dark Horse,” a gigantic Trojan Horse used as a prop magically moved its legs as Perry’s live backup band injected the energy that sustained her and her team of dancers for more than two hours.

Musically, the concert sometimes bordered on a cheering-squad beat, but managed to keep its old-school dance and contemporary hip hop rhythms bouncing all night.

Noticeable too were the number of fans wearing colorful wigs and outlandish costumes—including one that the singer had called on to teach her some Filipino words.

But three observations stood out in this gig:

First, it was now apparent that Filipinos don’t mind going out of their way to see a major international performer. It took at least two hours for people to negotiate the bottleneck at the venue’s exit, with this writer getting home at 3 a.m.

Second, the Philippine Arena has proven itself a viable venue for major concerts, with its bigger capacity than Smart Araneta Coliseum and SM Mall of Asia Arena. At Perry’s show, the size of the crowd was virtually triple than what the two aforementioned venues can hold.

Third, everyone loves a winner, and even competing corporate brands can come together to sponsor what may be an expensive, but obviously lucrative, venture. The Ayala group—which is behind Globe Telecom—sponsored Perry’s show, and so did Globe’s main competitor, Smart Communications, through its music app Spinnr. Whether it was a purely promotional project or a commercial enterprise no longer seem to matter to the rival companies. What was important was that the audience loved the show, and everybody went home a winner.

Now if only the Philippine Arena management can do something to make traffic going to and from the venue more tolerable.