What do you think of Bruce Jenner’s transition from all-American male to proud woman? | Lifestyle.INQ ❮ ❯ 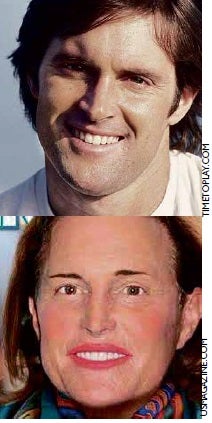 BEFORE AND AFTER. Bruce Jenner in the early ’80s, and as she appears now after a series of cosmetic surgeries and hormone treatments

What do you think of Bruce Jenner’s transition from all-American male to proud woman?

Millennials know Bruce Jenner as the family patriarch in the hit reality TV series “Keeping Up with the Kardashians.” But more people remember him best as the good-looking all-American track-and-field superstar who, after breaking the world record in decathlon, shined like a demigod in the 1976 Montreal Olympics.

Jenner, along with swimmer Mark Spitz and diver Greg Louganis, was, for various reasons, part of almost every impressionable teenager’s fantasies back then. Even American preschoolers didn’t escape his presence, as his winning form was splashed on boxes upon boxes of breakfast cereal.

Like most celebrated athletes, Jenner parlayed his celebrity status into profitable, if short-lived stints on TV and film. Personable and very professional—as Robert H. Miller, one of the respondents in this forum, attests—Jenner also did a string of endorsements and personal appearances for corporate America.

His career was revived in 2007 when he joined then wife No. 3 Kris Jenner and their big, overlapping families in “Keeping Up with the Kardashians.”

The show would end up as the classic template for all reality TV shows starring people who were famous for being famous.

Little by little, the series also revealed to the world how much Jenner’s public persona and once manly appearance had changed. Not only was his nose way too narrow, his once bushy eyebrows had been plucked. Gone, too, was the five o’clock shadow he occasionally sported—in its place was a smooth, almost eerily ethereal complexion.

In a recent two-hour tell-all TV interview with American broadcast journalist Diane Sawyer, Jenner revealed that he was already taking female hormones for five years before he and Kris became a couple. (They still managed to produce two beautiful daughters—models Kendall and Kylie Jenner).

His coming out seemed like a foregone conclusion. Months before the interview, Jenner was photographed by paparazzi wearing nail polish and having his long, straight tresses colored at a beauty salon.

Even as a child, he said he already knew that “being a woman” was in his “soul.”

Yet, despite the obvious changes, Jenner, during the TV interview, claimed with a straight face that he was still heterosexual. In short, he had not had sex with other men.

But he showed Sawyer the little black dress he wanted to wear. They were like two girl friends chitchatting on a lazy Saturday afternoon.

However, during the one-on-one interview, Jenner wanted Sawyer to refer to him as a “he.” Ponytail, LBD, female hormones and all, he told her that undergoing a sexual reassignment procedure was something he had yet to consider.

While many lauded him, certain quarters dismissed his supposed coming out as nothing but a cheap publicity stunt to drum up interest in an upcoming reality TV series. Others simply dismissed him as crazy.

Truth or tabloid story, what Jenner did was brave. He seemed prepared for the likely fallout. Like some of this forum’s respondents have pointed out, at age 65, the former symbol of American manhood had nothing to lose.

But to many who came of age in the ’70s, he will forever be Bruce Jenner, the long-haired hottie in a tank top and short shorts whose toned, outstretched arms are forever frozen in triumph.

“I say, to each his own. In a free society, people should be allowed to express themselves and do things befitting of what they deem is good and necessary to achieve happiness. As long as they don’t harm others, I’m all for it.

“This is a tricky statement, as moralists and religious groups will always have issues to bring up. Jenner’s celebrity status makes it even more complicated since he’s always under public scrutiny.

“I admire him for coming out in public because he represents a marginalized group of people who, in many ways, may be suffering from similar situations. With his decision, Jenner was able to show and reveal to the world this group of people had a sense of vulnerability.

“It takes lots of courage and guts to go against what society’s norms have dictated on us. Only a free thinker with a progressive mind can honestly open up without fear of being ostracized by the public.”—Miguel Pastor, architect

“She should [have made that move]! I’m now using ‘she’ because that’s who she is. To say that she’s a woman trapped in a man’s body may sound so gasgas, but it’s her reality. It’s her truth!

“And the most liberating thing in this world is to be true to one’s self. She should follow what her heart desires without harming anyone.

“With her status and accomplishments, it’s next to impossible to be quiet about the whole transformation process.

“Both mainstream and new media are having a field day before and after her interview came out. Bottom line: We all can learn so much from Bruce’s journey and transformation. —Monika Ravanera, stylist

“My only issue about it is that he’s a better-looking man than a woman. Why, oh why, Bruce?

“Plus, he says, he still likes women, but he just wanted to be a woman physically. No offense meant to lesbians, but does that make him a lesbian?

“Television doesn’t shock me anymore. Americans may be the craziest bunch, but I have no problem with him going public.” —JC Buendia, fashion designer

“I think what Bruce Jenner did was very brave. I’m so glad he did the interview.

“I watched the interview, and I could feel the pain, suffering and emotional roller-coaster he went through. What he did opened up minds to the situation. Opening it for thought and discussion is always a good thing.” —Rajo Laurel, fashion designer

“We just all have to respect his decision. I have to admit that it was a surprising one. On making it public, it would’ve made news anyway even if he kept quiet about it. In the end, he earns my respect for being brave about it.” —James Reyes, fashion designer

“Bruce Jenner was the Olympic hero of my youth. That’s the image that will always stick to my mind. What a difference three decades can make!

“I guess he has his reasons. After all, it’s his body! I don’t think he can ever get away from the public eye. His involvement with the Kardashians sealed his fate.

“It will be difficult for him to lead a ‘normal’ life as a woman. For such a life-altering decision, I do hope he can find peace and contentment, if not happiness.” —Eric Pineda, costume designer

“Transgender people need celebrity role models, and Bruce is one of them. He was brave to do it considering his background as an athlete. But he followed his/her feelings and we should all respect that.

“I recall Christine Jorgensen in the ’50s. The first known person to have a sex change was helpful to those who wanted to do the same. I don’t believe transgenders, whose purpose is to help others who want to change, should stay in the closet.” —John Silva, writer

“Bruce Jenner did the right thing. Everyone has his or her personal definition of happiness. His was to be a woman. Straight or even gays may not agree with what he did, but they should respect his choice. Pardon the pun, but, for doing what he did, Bruce had balls!” —Louie Cruz, gay icon and society fixture

“For going public with the interview, all I can say is bravo! I’m happy for Bruce for finding his true self. What got me wary was the attendant publicity and looming reality TV series.

“He appeared publicity-whorish. And coming from such a family like the Kardashians, you tend to ask yourself: Where does real life end, and reality TV begin?

“A lot of transgender people before him have transitioned quietly and are now living exemplar lives. I believe living a decent, respectable life is what will inspire young, confused kids. And not parading one’s private life before the cameras!” —Armando Fabia, fashion designer

“Over the years, I have met and worked with numerous people who were either in the early transition stage or had completed their journey of becoming a member of the opposite sex.

“Nearly all told me that their early lives were torturous and conflicted. Some even entertained thoughts of suicide when they were unable to find an answer to why they felt trapped in a body that did not reflect their true gender.

“Some started the transition early but others tried to ‘fit in,’ got married, had children, but the internal conflict was still there. Nearly all the transgenders I talked to were very happy to make the transition journey and felt their lives had changed for the better.

“I was surprised by Bruce Jenner’s decision to transition, but given my limited, nonscientific knowledge of the subject, I understand why he did it.

“The feelings he must have appear no different than what other transgender people have told me. They are willing to confront any negative family/societal reactions head-on because deep down they know they will be happier in the gender they feel best reflects who they are. So, I think, from his perspective, he is doing the right thing.

“Will society as a whole accept his decision, given his sports background? Only time will tell. As to whether he should have remained silent, kept a low profile or just faded into obscurity, I think that would have been impossible due to his celebrity.” —Robert H. Miller, former US-based financial executive. Now living in the Philippines for the past 10 years, he and his colleagues got to spend a day with Bruce Jenner sometime in the early ’90s when Jenner appeared at one of their company-sponsored Olympic events.

“To me, he is just doing great. He just realized that life is indeed beautiful; and he has a few more good years left to explore what life can still offer. It’s his life and his choice. We just have to respect his decision.” —Sau del Rosario, chef

“I’m pro Bruce Jenner! With all the violence against gays and transgenders, what he did definitely brought awareness to so many issues. Now that he’s a senior citizen, he’s also entitled to be happy for the remainder of his life.” —Noel Crisostomo, fashion designer