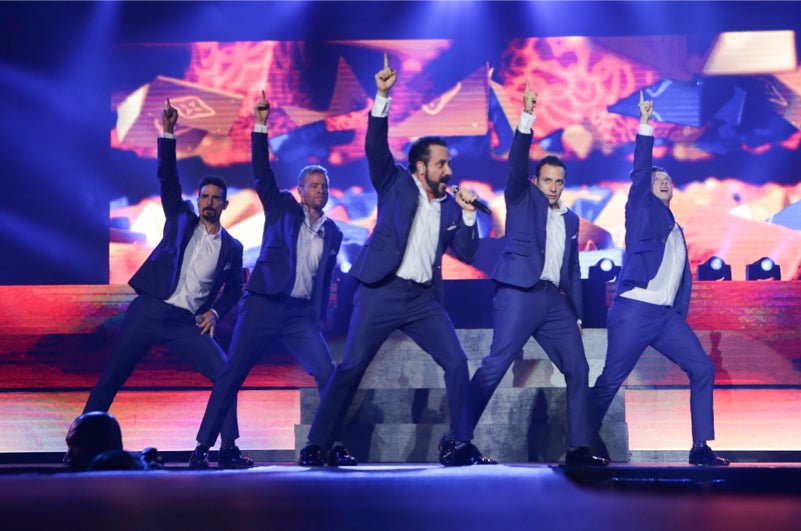 ‘Boys’ no more. Looking dapper in suits, the men of BSB performed old and new hits spanning their 22-year career to a full house last May 5. PHOTO COURTESY OF OVATION PRODUCTIONS

Just when we thought our teenybopper days were over, one of our beloved boy bands from the 1990s returned to make us feel like we’re 12 and pining over pinup posters all over again.

The Backstreet Boys (BSB) brought its current tour, named after its 2013 album “In A World Like This,” to Manila in a sold-out, one-night-only show at the SM Mall of Asia Arena last May 5. The concert marked BSB’s fourth visit to the country; the last one was in 2012, when the group (sans oldest member Kevin Richardson, who was on hiatus at the time) performed back-to-back with New Kids on the Block.

They may now be full-grown family men in their 30s and 40s, but the “Boys” are hotter than ever. Sure, they’re a little chunkier, but they’re the same five guys from Orlando, Florida, who charmed their way into our fangirl hearts with their cheesy song-and-dance numbers 22 years ago.

Looking dapper in blue suits, Kevin, Brian Littrell, AJ McLean, Howie Dorough and Nick Carter opened with “The Call,” a fiery track from BSB’s 2000 album “Black & Blue.” The 22-song setlist consisted of well-loved throwback tunes from 1995-2005 and several tracks from the group’s most recent record, “In A World Like This.”

Nick had two rules for the audience: Get crazy, and act like they were 15 years old. And so the nostalgic ride began with a finger-snapping intro to the wistful classic “All I Have To Give,” complete with the hat choreography in the music video. This would have been the best song-and-dance number of the night, if not for a little problem with Brian’s microphone, which rendered him inaudible during his solo bits.

The band continued to serenade the crowd with “As Long As You Love Me,” “Show Me the Meaning of Being Lonely,” and “I’ll Never Break Your Heart.” AJ’s husky vocal runs blended nicely with Brian’s honey-smooth high notes. The group also celebrated the 20th anniversary of its debut single “We’ve Got It Goin’ On,” with choir-boy harmonies and an old-school hip-hop dance routine.

The acoustic set was arguably the show’s highlight. Playing their instruments of choice—Nick, Howie and Brian on guitar, AJ on percussion, and Kevin on keyboard—the group teased the crowd with a few bars of “I Want It That Way” before blowing everyone away with a hair-raising a cappella snippet of the 2001 single “Drowning.” This was followed by a rare unplugged version of an underrated older ballad, “10,000 Promises,” off BSB’s 1997 sophomore album, “Backstreet’s Back.”

Amid the eye-candy fan service and onstage gimmickry, it was easy to forget how good BSB actually sounded; that’s why this acoustic set came as a refreshing change, showcasing beautiful harmonies and reminding everyone that BSB is a legit vocal group.

BSB has likewise gotten more hands-on with its songs on its most recent album. While Nick and Howie cowrote the midtempo pop track “Love Somebody,” dads Kevin and AJ composed the heartfelt anthem “Show ’Em (What You’re Made Of)” for their kids.

Brian reportedly bared his toned torso in the music video for “Show ’Em,” not to flaunt his assets but to show the postoperative scar on his chest, the first time he’s gone shirtless in public since undergoing open-heart surgery in 1998.

We took note of some of the gig’s memorable moments: the group playfully “dedicating” the jangly pick-me-up song “Madeleine” to Manny Pacquiao, and praising Filipino singers Sarah Geronimo and Journey’s Arnel Pineda; Nick’s crazy dancing on the upbeat track “Permanent Stain”; Brian’s cartoon-like antics and Woody Woodpecker laugh; AJ jumping off the stage to mingle with the fans; Howie trying to get the crowd to do alternate singing on the acoustic version of “Quit Playing Games With My Heart”; Kevin looking so impressed by the audience that he actually veered off script and let the fans repeat the “Drowning” chorus a cappella.

The two-hour show ended with the full version of “I Want It That Way” and the two-part opus “Everybody (Backstreet’s Back)” and “Larger Than Life.”

“What do you do when you’re a full-grown man in a boy band?” Brian mused in the video trailer for the band’s new documentary film during an intermission. Good question, guys, but we’ve got an even better answer.

Keep having fun onstage. Stay fit and feisty. Make girls swoon and boys secretly sing along to your songs. Stick together as a group, even if one of you decides to leave at some point, because you’re always better off complete.

And, most importantly, make new music so you can do a new tour. We’re still dying to watch you do that chair choreography for “As Long As You Love Me,” the golden oldie “Anywhere For You,” a full version of “Drowning,” the beautiful ballad “I Still…” and that little song called “Get Down” that set you well on your way to becoming living pop legends.

Until then, we’ll be more than happy to keep the Backstreet pride (and the starry-eyed teenybopper in us) alive.