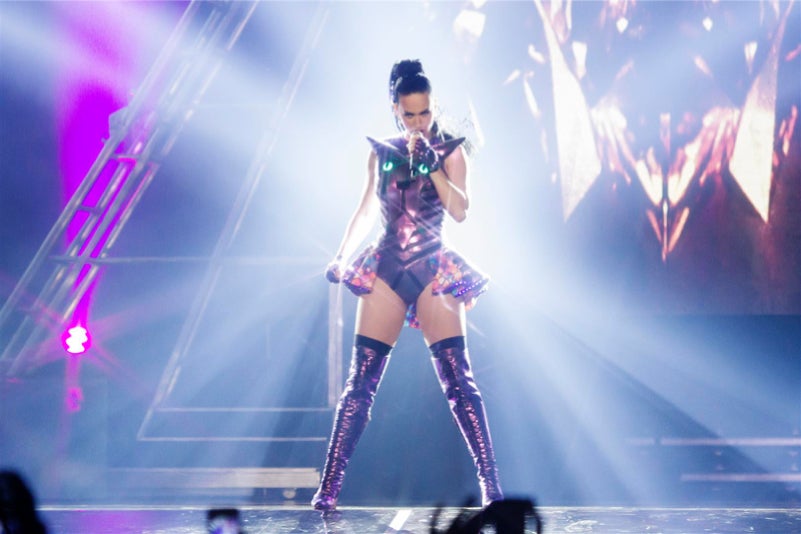 Fantastic ‘Prismatic’ Katy Perry brought her highly successful ‘Prismatic’ world tour to the country last May 7 with more than 30,000 fans in attendance. PHOTO BY JASPER LUCENA

“Manila!!!” roared Katy Perry in her skintight metallic catsuit, and the 30,000-plus audience screamed in delight. Never mind that we weren’t exactly in the country’s capital—the gigantic new Philippine Arena, where the 30-year-old pop superstar performed last May 7, is actually in Bulacan—or that many of us had arrived annoyed and bone-weary from being stuck in gnarly northbound traffic for hours. Once Katy appeared on the elaborately decked stage, all cares and worries faded into glorious Technicolor oblivion.

As the 138th stop in her long-running “Prismatic” world tour, the fans already had a good idea of what to expect. Compared to Katy’s “California Dreams” tour, this one was less bubblegum pop but equally amusing and extravagant, containing several theme acts that showed the many sides of the American singer/songwriter.

Katy opened with a searing trifecta of self-empowerment anthems: “Roar,” “Part of Me” and “Wide Awake.” The ponytailed pop star rocked a metallic purple cat dress and thigh-high boots, surrounded by laser lights and dancers in galactic tribal costumes and glowing spears.

The next act saw Katy gliding onstage atop a puppet horse in an ornate lavender-and-gold Egyptian outfit, as she sang her sensual, space-age hit singles “Dark Horse” and “E.T.” After sashaying to “Legendary Lovers” with her hunky dancers, Katy performed a guitar-heavy rock version of her iconic single “I Kissed A Girl” while buxom female mummies shook their exaggeratedly large “behinds.”

The recurring cat theme took center stage during the “Kittywood” set, where the singer did a jazz version of “Hot N Cold” in a pink cat leotard, plus a mashup of “International Smile” and Madonna’s “Vogue” in a silver fishbone dress.

Twenty-year-old Martee Viray from Rizal got the best surprise of his life when Katy spotted him wearing a replica of her fishbone suit and asked him to come up onstage to teach her some Tagalog words. He looked so shell-shocked that the singer offered him some water to regain his senses, and the conversation that ensued was one of the funniest highlights of the evening.

She dedicated the sweeping track “Unconditionally” to all Filipinos.

The mood quickly changed from somber to comical as the next act took the term “Throwback Thursday” to a whole new level. While Katy went backstage for her nth costume change, the audience members had fun watching themselves bust out some old-school moves to a medley of ’90s Eurodance hits on the giant “Dance Cam.”

For her final “Neon” act, she brought out her playful persona and got the audience on their feet with a barrage of her ear-candy hits. She turned the arena into a giant house party, letting loose giant junk-food-shaped balloons while doing a medley of “This Is How We Do” and “Last Friday Night.”

The romping, fun-filled track “California Gurls” rounded up the main set, with Katy’s dancers rearranging the “Hollywood” letters to form familiar catchphrases like “YOLO” and “LOL” amid showers of confetti. Finally, a resplendent Katy in a multicolored ball gown capped off an incredible show with the ubiquitous “Firework,” complete with actual pyrotechnics.

But any trace of the postshow high admittedly disappeared during the long ride home. Getting into the venue during rush hour was one thing; getting out of it was an absolute nightmare. Imagine thousands of vehicles, which contained more than 30,000 people, lining up single-file at the lone exit point to NLEx.

The time we spent on the road was practically twice as long as the concert itself, and many probably didn’t make it to school or work the next day. We’re even willing to bet that Katy’s entourage was still stuck in traffic at 3 a.m. along with the rest of us.

Then again, this was all part of the experience—going the extra mile (or 10) for your favorite artist, and wanting nothing more than to have the privilege of seeing a truly talented performer give her all in everything that she does.

No regrets, Katy, just love. And we sure hope the feeling is mutual.