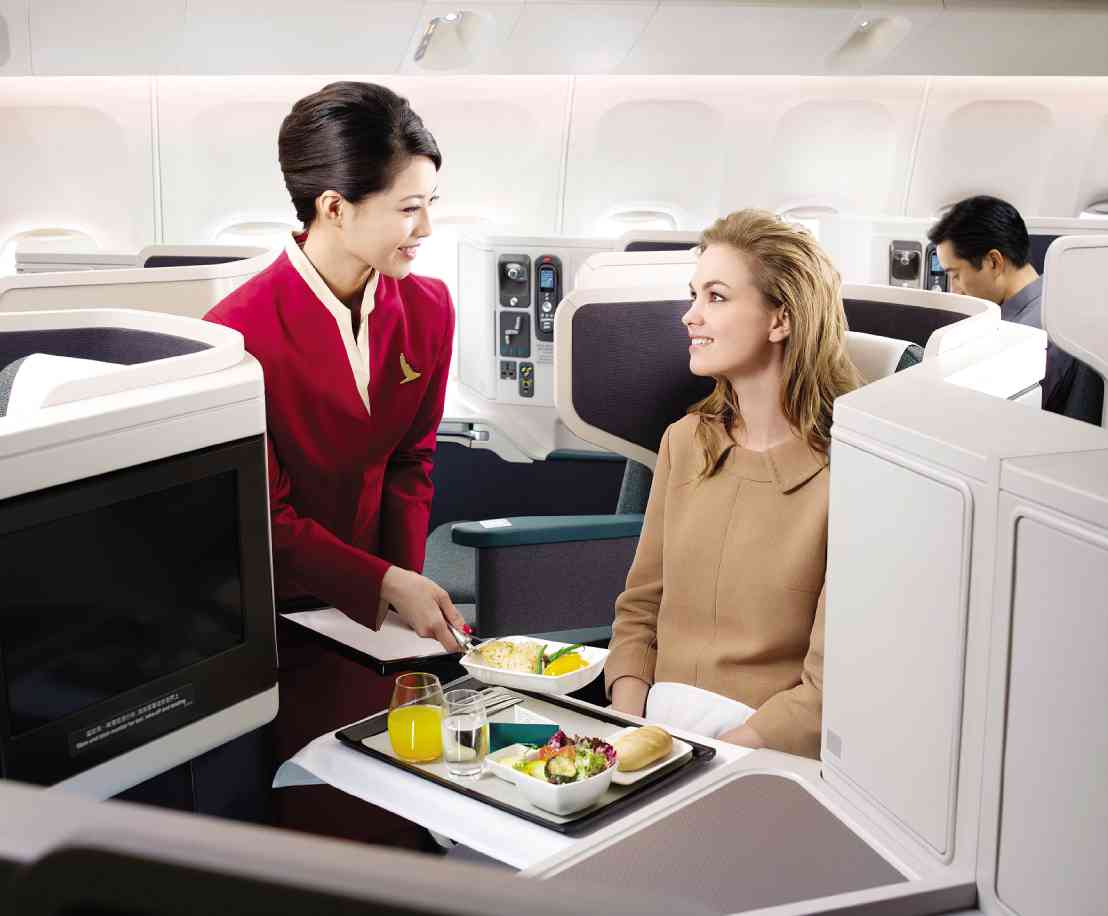 Utmost hospitality in the skies

As low-cost carriers compete with traditional airlines by removing frills for lower fares, Cathay Pacific has launched a campaign that quietly heralds the advantage of flying with a full-service carrier.

“Life Well Travelled” focuses on trips that can be more gratifying when a passenger flies with an airline that provides full security and comfort.

A promotional advertisement features a female passenger on the economy class being served water by a flight attendant even before the passenger asks for it. The commercial ends with the traveler comfortably sleeping on a reclined seat with lot of leg room. Meanwhile, the passenger beside her watches an in-flight movie.

This scene is so unlike the typical budget airline or even a full-service carrier whose cramped seats leave tall or stocky passengers fidgeting in discomfort.

Another version of the promo ad shows a corporate executive, a frequent flier, being welcomed by name in the business class departure lounge. He then sleeps on the business class capsule which has a flat bed. An attendant comes to bring water to the exec.

A third family-oriented commercial shows how children are given special treatment from check-in to being tucked with a blanket while sleeping on the premium economy class.

At the Philippine launch of “Life Well Travelled,” celebrities talked about why they love flying via Cathay Pacific.

Athlete and businessman Chris Tiu said he has more options for flight schedules and quick connections. He enjoys the noodle bar at the lounge in Hong Kong International Airport. The flights are comfortable that he feels fresh upon arriving at his destination.

Designer Amina Aranaz-Alunan said the airline is child-friendly. During a recent trip, her children were well-behaved and treated like little adults.

On the new campaign, Cathay Pacific country manager for the Philippines Alan Lui said flying isn’t just about taking passengers to their destination. While other full-service carriers have been reducing frills to regain profits, Cathay Pacific believes that good quality service is beneficial in the long run.

“We invested a lot in the product and designed it around the needs of the passengers. In long-haul flights, the seats are more comfortable. Passengers who can’t sleep can enjoy a wide range of current in-flight movies, television shows, music and games. Our new aircraft has touchscreens instead of a remote control for easier viewing. There are also activities for the children,” said Lui.

As a result of its attention to detail, Cathay Pacific was awarded the 2014 Airline of the Year for the fourth time by Skytrax, a customer airline service survey.

The survey covered 252 airlines, involving 19 million passengers from 160 countries who voted on their memorable traveling experiences.

Lui attributes Cathay Pacific’s popularity to service, safety and schedules. The airline has a modern wide-body fleet of fuel-efficient planes for long-haul travel. He added that more Boeing 777s are in the pipeline, and the new generation of seats and in-flight entertainment products will be launched with the coming of the A350 aircraft next year.

“You can easily connect to every flight in Hong Kong. It becomes more convenient and you have more options. This is our edge as one of the biggest foreign carriers in the Philippines,” said Lui.

Ultimately, the new campaign conveys the message that the airline is not just a quick mode of transportation but rather an elegant example of utmost hospitality in the skies.

“We differentiate ourselves with a personalized service unlike the standard practice. Our service is straight from the heart. We put ourselves in the shoes of the customers… Our team will go the extra mile,” Lui pointed out.