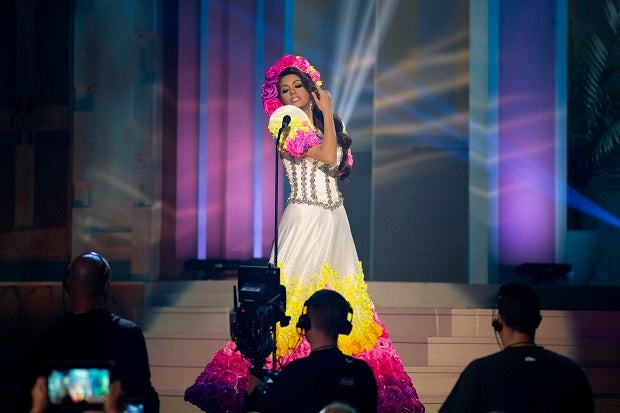 A bill has been filed in the House of Representatives requiring Filipino beauty queens competing in international pageants to wear only gowns created by Filipino designers.

Parañaque Rep. Eric L. Olivarez is proposing, under House Bill No. 5691, that “Filipino fashion designers must at all times be involved in the designing of garments, dresses and costumes for Filipino beauty pageant contestants.”

If passed, the measure will be known as the “Filipino Fashion Designers for Filipino Beauty Pageant Contestants Act of 2015,” the lawmaker said.

The bill appears to be directed at the practice of the Binibining Pilipinas pageant organization helmed by Colombian beauty queen Stella Marquez-Araneta of tapping Colombian designer Alfredo Barraza to make the gowns for Filipino candidates competing in international pageants.

In the last Miss Universe pageant, Araneta became a trending topic on Twitter after netizens expressed displeasure over the quality of the Barraza costume worn by Miss Philippines Mary Jean Lastimosa.

Lastimosa did not make it to the final stage of the competition, while the crown went to—coincidentally—Miss Colombia Paulina Vega, drawing tongue-in-cheek conspiracy theories of sabotage among Filipino social media users.

The Olivarez bill also states that garments, dresses or costumes “representative of Filipino culture, identity and nationality” shall at all times be the default fashion design for every Filipino beauty pageant contestant in any international beauty pageant competition.

In filing the bill, Olivarez said design should always reflect the country’s expression of excellence and ingenuity in any international contest, especially pageants held abroad.

“It is for this reason that our Filipino fashion designers, who are experts in their fields, should be the entrusted designers for our Filipino contestants in international beauty pageants,” he said.

The bill mandates the National Commission for Culture and the Arts (NCCA) as the primary commission to regulate fashion designers for beauty pageants and other fashion design competitions in which the Philippines is participating.

“The measure also aims to facilitate greater coordination among fashion designers in the country with the help of the NCCA as well as to require local franchise holders and other institutions of beauty pageants to standardize the recruitment of fashion designers to be strictly Filipino,” Olivarez said.

The bill requires all local franchise holders, sponsors, handlers, organizers and other institutions of beauty pageants to recruit or have a pool of Filipino fashion designers who may immediately be hired in any international beauty pageant competition.

Any franchise holder, handler, organizer and sponsor that violates any of the provisions may face a penalty of imprisonment of six months or a fine of P100,000, or both, at the discretion of the court.