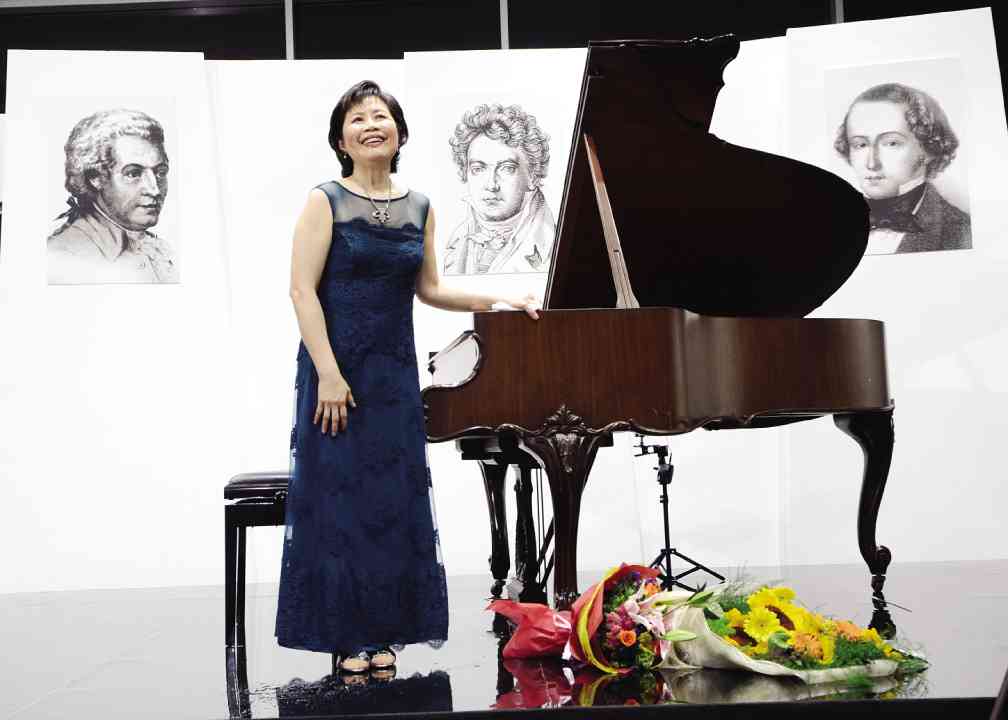 Pianist Cristine Coyiuto gave a refreshing recital at the Audi Showroom in Bonifacio Global City through a program that consisted of a sonata each by Mozart and Beethoven, and works by Chopin.

The Audi Showroom has become a viable venue for piano performances. And why not? After all, the Latin word “audi,” is the Latin equivalent of the surname of founder August Horch, the German word for “listen,” said the pianist’s husband, James, in his welcome remarks.

Audi has been associated with international music festivals such as the Salzburg Festival in Austria; Bayreuth Festival in Germany; and recently the Beijing Music Festival in China.

The piano used was a vintage Steinway King Louis XV, which is now parked at the showroom, James Coyiuto said further. It was purchased by his late father, Robert Sr., in the late ’70s, and was played on by Cristine in 1982 in a private soiree in the Coyiuto residence in Dasmariñas Village that had. Lucrecia R. Kasilag in the audience.

It turned out to be an “audition,” for Cristine. The following year, Kasilag graciously invited her to be Philippine Philharmonic Orchestra’s soloist in the Philippine-Russian Music Festival, playing Rachmaninov’s Piano Concerto No. 2 and Prokofiev’s Concerto No. 2, all rendered in one evening.

Coyiuto said Cristine’s choice of the program for the recital in review was dictated by the capability of the piano, not the other way around.

The piano had a remarkable singing sound. I had the pleasure to savor its lyrical singing sound two years ago when pianist Inna Mostesclaros played on it after it had undergone solid repair.

Truly, building one’s program on the piano’s tonal capability is a mark of an intelligent recitalist.

The familiar Mozart C Major Sonata sounded so gloriously brilliant. And when it was time to sing in the second movement, Coyiuto ravished the listener with singing lines that she played with gusto.

There was more singing in the next piece, Beethoven’s Sonata 110 in A-Flat Major. Here, Coyiuto dished out exquisite legato singing lines that were less dependent on the pedal. The execution of the fugue at the end of the piece revealed quite an expressive stance of a sensitive pianist who was well connected with the piece.

There was much warm sentiment and poetry in the Chopin numbers that the pianist essayed, starting with the last of the Ballades, the No. 4 in F Minor, which she rendered with quite a mature disposition.

The pianist sang her lines, underscoring appealing lyricism and imaginative disposition. The familiar Fantasie Impromptu in C-Sharp Minor was refreshing, rendered with no triteness but with biting appeal.

She had shown much integrity as a recitalist, a more difficult task than that of a collaborative performer.

Such integrity goes well with a burning commitment to the high art demanded of a performer. Indeed, qualities that Cristine Coyiuto has convincingly shown.