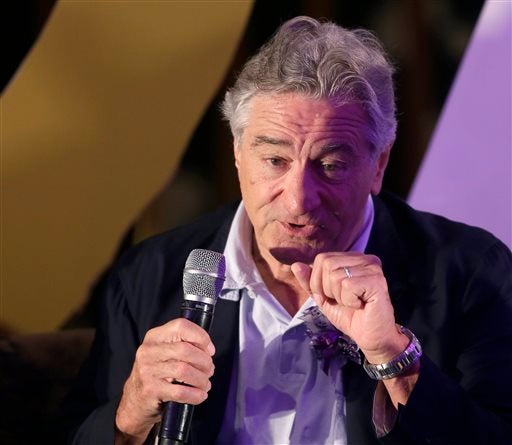 Hollywood actor Robert De Niro answers questions from the media during a news conference at the opening of the Nobu Hotel at the City of Dreams Casino Monday, May 18, 2015 at suburban Pasay city, south of Manila, Philippines. Robert de Niro and his business partners have formally opened Asia's first Nobu Hotel in Manila as the luxury brand gears up for global expansion. AP

All five said they were optimistic that the hotel located in the integrated resort City of Dreams would do well. “The Philippines is one of the fastest growing nations in Asia and I think this growth will continue,” Packer, Melco’s co-chair said at the press conference.

De Niro, who said little at the time, became voluble during his interview with members of the lifestyle press. “We’re planning to put up the first Nobu resort in another part of the world but after going to Palawan, we might open one on an island here as well.”

Told that there were over 7,000 islands in the country, De Niro cracked a smile and said, “There should be something there somewhere. This is the perfect place for it.”