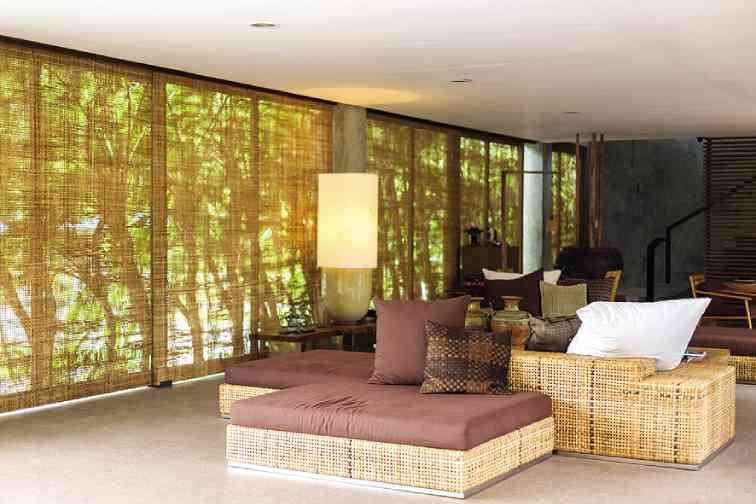 AT THE LOBBY/SOCIAL area, what greets guests is Milo Naval’s creative blend of indigenous materials and contemporary design. His sliding doorsmade of woven rattan strips are a sophisticated innovation—a transparent installation that frames the trees in the gardens, a play of light and texture. PHOTOS BY JILSON SECKLER TIU

Since formally opening almost two years ago, Siama Hotel in Sorsogon province has earned a reputation for its beautifully designed interiors. Credit goes to designer Milo Naval, who virtually turned four hectares of the 10-ha copra plantation into one giant showroom.

In the expansive lobby is Naval’s take on modern Filipino design. Sliding doors of woven rattan strips lead to the garden and the swimming pool.

Three long wooden tables surrounded by cushioned ottomans catch the eye for their heft and uneven edges. Naval says they were cut lengthwise from one acacia tree trunk and given a coat of protective lacquer. Guests can sit at the tables for meals made with coconut cream and flavored with chili. The ottomans have solihiya cladding.

Near the entrance are two plantation chairs (butaca) with woven rattan seats, also designed by Naval but given a more resort-like feel. The wide, deep seats allow for stretching out or curling up with a good book or tablet.

Naval, who studied architecture at University of Santo Tomas and took up interior design at the Philippine School for Interior Design, is a member of Movement 8, which aims to promote Philippine design worldwide.

His design of a hurricane lamp made with cowry shells won awards and caught the attention of the foreign market. Signature pieces are made of natural materials like abaca, raffia and water hyacinths woven to his specifications.

For Siama, Naval experimented with luktog, a tree found in the province whose wood he used as slats for the facade and other public areas.

In the living area just in front of the reception, there are two couches—oversized love seats, really—outfitted with cushions. There is also a TV off to the side, though nobody bothered to switch it on.

“When we were conceptualizing the resort, we wanted to maintain the provincial feel of the place but with all other creature comforts included,” Naval told Inquirer Lifestyle. He was being modest, because the resort is the most luxurious the province has ever seen.

Three buildings surround a rectangular pool lined with giant ferns and dotted with towering coconut trees. The first building has family rooms good for four; the second is for couples and honeymooners; and the third has bunk beds for as many as six in a room.

In sum, the resort and its facilities take up less than half of the 10-ha property, but Naval and his wife Kat want to keep it that way. “We can have a maximum of 50 to 60 guests at a time,” he said.

The Navals pointed out that they want to position the resort as the “home base” of guests who intend to visit other places in the province. Since Siama is in the city, guests can leave in the morning, go whale-watching in Donsol, check out a new surfing destination, Gubat, and head back to the resort by afternoon.

Naval designed the rooms as plain shells to allow him and his staff to move things around and keep things fresh.

Our room during our stay had a huge bed in a frame made with rattan poles; at one side was a comfortable daybed in a wooden frame. It was one of the most spacious we had seen.

There was, however, neither closet nor cabinet, only a small vanity table with a recessed mirror that ended up holding most of our things.

Some guests become so enamored with Naval’s designs that they ask where they can buy his pieces. Fortunately, he has a showroom in Makati.