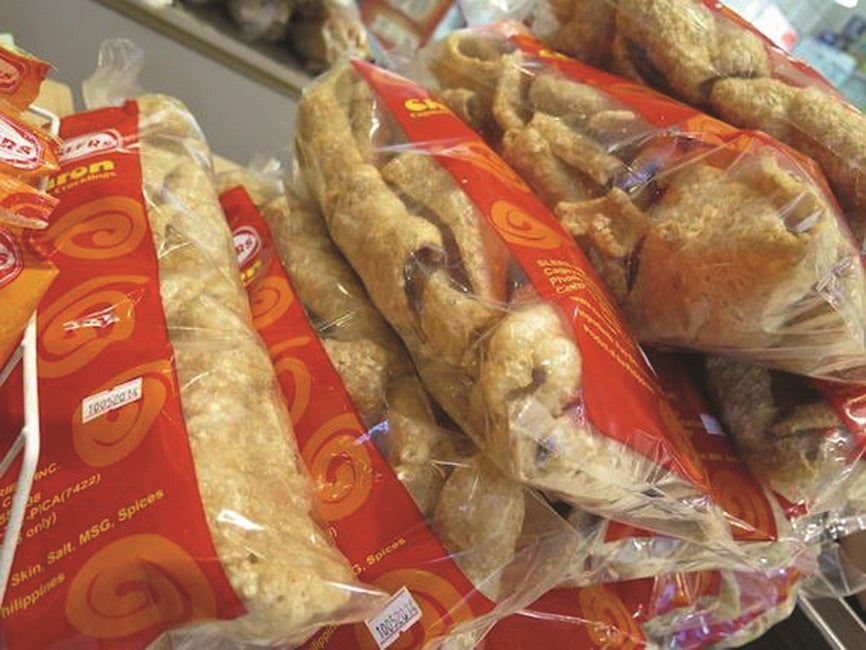 The story behind P-Noy’s favorite ‘pica-pica’

Do you  know that President Aquino’s favorite pica-pica, midnight snack and comfort food is a crunchy pasalubong from Cagayan de Oro City?

That may have been said in presidential banter, but there it is—his can’t-do-without must-munch.

Chicharon happens to be that irresistible guilt trip: crispy pork skin fried in its own fat. But SLERS Chicharon has an extra munchful of pork meat wedged in the interstices of its crunchiness. Which makes for a merry mix of flavorful textures in one mouthful. And another. And still some more.

“Every so often a Malacañang caterer would call me up, asking me to send more chicharon, and I’m only too happy to oblige,” says Mercedes P. Mejia.

Known as “Litlit” in the social circuit in Northern Mindanao, Mejia runs the family-owned corporation SLERS, an acronym of the nicknames of the children of Raul and Fely Pelaez (he’s from Cebu, she’s from Tagoloan, Misamis Oriental): Shirley, Litlit, Earl, Rey and Sharon.

“Dad worked in Del Monte until he retired in 1986,” Mejia says. “Mom was a housewife up there in Bukidnon with him until her own recipe of ham became popular and she began to receive orders.”

This winning recipe was Smithfield ham—“not the Chinese type, ha”—prepared using a big leg of ham cured with fresh pineapple for six to eight weeks.

It was pricey and premium, and, with the family’s bacon recipe, became the core of a cured meats business that began in 1969 and has become a respected brand in the local market.

Over the years, the children grew up and started to raise families abroad. Mejia herself went to the United States in 1987.

She recalls: “But my husband and I didn’t grow up there; our mindset was definitely not American. We were there for six months, and we decided to come home.”

That’s when she became active in the family business.

“My role was that of an innovator,” says Mejia. “I tried to look at the market from my point of view as a woman consumer who is quite good with my money and wants to exercise control over my expenditure. Housewives like me think of convenience, value-for-money, stuff that would not require much time and effort, as well as food safety.”

She brought SLERS to local grocery stores and malls, selling meats per piece or per gram, “takal-takal style.”

Noting how cheap beef was in the region, she introduced corned beef in the SLERS product line. She borrowed her Kapampangan husband’s recipe and included tocino, too, which promptly became the bestseller.

“We became known for both food quality and food safety,” she says.

Then came the downturn eight years ago that gave birth to P-Noy’s favorite snack.

Mejia puts it this way: “In 2006, our main supplier of meat, Nenita Farms in Davao City, suddenly closed shop. We were caught unaware. Without our meat supply, our production was at a standstill. We got in touch with other suppliers, but they had other commitments and could not accommodate us just like that. I went in to look at our inventory. We had a lot of bones, several heads and a ton of pork skin.”

Without a second thought, she scooped up a half-kilo of skin and plunked them in an aluminum frying pan in her kitchen, following instructions on how to make chicharon from the Internet.

She wasn’t happy with the initial results. “It was pale and fluffy, unlike the compact, yummy-looking chicharon I remembered from Cebu,” she recalls.

She began to experiment with chicharon every day. “I read up various recipes and tried them. There was a how-to video from a government agency, and I followed that, too. I ate chicharon products in groceries and noted what I liked and didn’t like about them. I tried to bring it down to the basics, and I realized it was all about the science of how to manipulate time and temperature as well as tweak the process flow. I began to gain confidence and cooked two kilos, five kilos. And then I began to be happy with my chicharon.”

Mejia says that her yaya helped her during her chicharon trial-and-error challenge. She added two kitchen staff, which became five.
When SLERS Chicharon finally rolled out into the market, Mejia had 10 workers working on the new product.

To her surprise, it picked up rather quickly, with orders from as far as Davao City and General Santos City in the first few months.

“You earn something, you plow it back to the company,” she says.

In no time at all, SLERS Chicharon has become the flagship product of an innovative marketing strategy—or haven’t you noticed those cutesy SLERS Pica-Pica stalls now found in select malls throughout the country?

Says the ballroom-dancing socialite behind the presidential must-munch: “These days, my son Daniel, who has a flair for cooking, is helping me out in the family business, and I’m glad to take on just the leadership role and leave the day-to-day operations to others.”