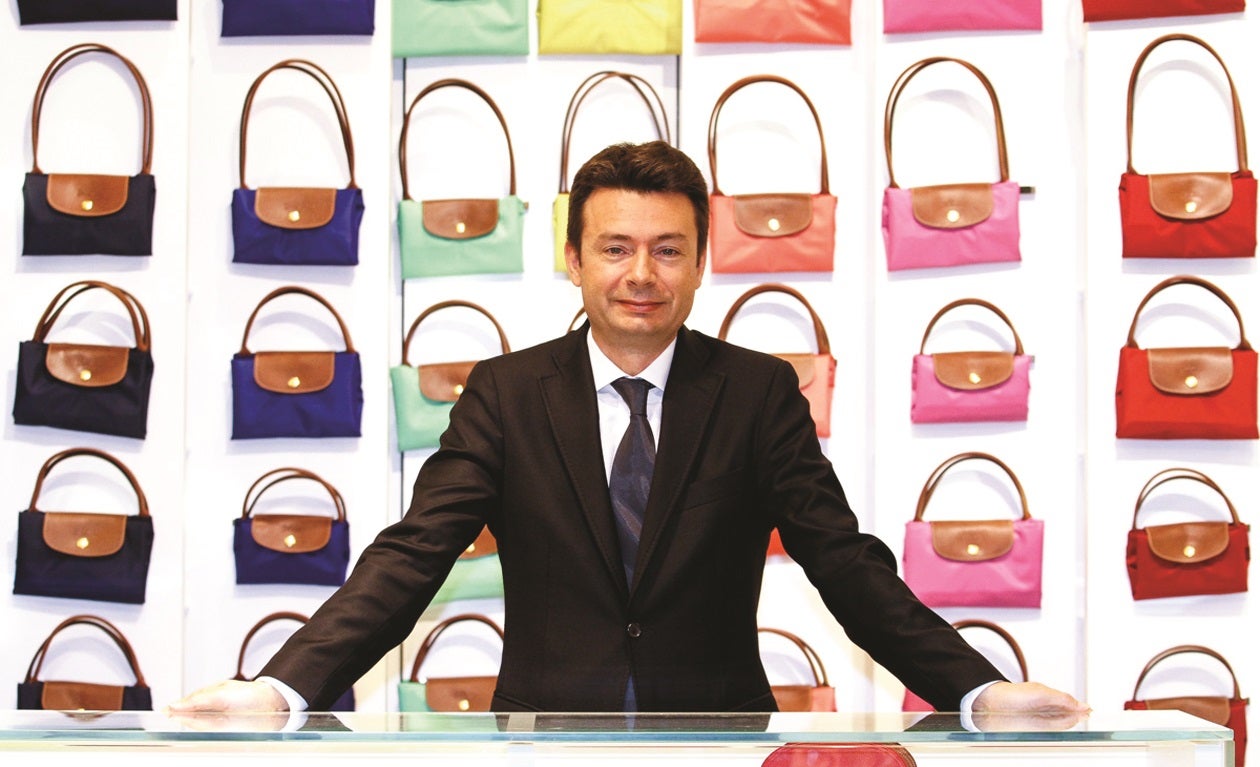 Finally, a home in Manila for the beloved Le Pliage

The numbers aren’t in yet, but it won’t come as a surprise if bag-obsessed Filipinos cause a spike in Longchamp’s sales with the recent opening of its first stand-alone store in the Philippines.

Bright and inviting, the 63-square-meter Greenbelt 5 boutique follows the design elements of Longchamp’s newly opened flagship store on the Champs-Élysées in Paris.

“It’s a concept that combines the look of stone and wood for a bright, luxurious feel,” said Francois-Xavier Severin, Longchamp’s GM for Asia-Pacific. “Since it follows our stores’ latest look, the feel is the same but on a smaller scale.”

Since Longchamp’s Le Pliage was launched in 1993, the French company has sold close to 30 million of its iconic and foldable nylon-and-leather bags, which now come in 12 standard colors.

And thanks to Longchamp’s continuous collaboration with various designers and artists, such as Jeremy Scott, Mary Katrantzou, Sarah Morris and even supermodel Kate Moss, the bag now comes in various seasonal and limited-edition prints and shades.

Le Pliage has been done in 150 colors and prints, in various sizes, and a choice between short and long straps. In recent years, its tan leather component has also been done in other neutral colors.

Originally intended by Philippe Cassegrain, the bag’s designer and son of Longchamp founder Jean Cassegrain, as a complementary item to its growing line of luggage, Le Pliage (meaning “folding” in French) became so successful that it later inspired two variations: the foldable, all-leather Le Pliage Cuir and the structured Le Pliage Heritage.

Despite its seeming simplicity, a lot of work went into its design. Since Cassegrain’s main challenge was to make the bag self-sufficient and do away with the pouch, it took him and his team three years to perfect Le Pliage’s design and construction.

But once it hit stores, there was no looking back. To Cassegrain’s amazement, the entry-level bag not only outlasted items it was supposed to complement, it eventually defined Longchamp.

Severin credits Le Pliage’s success to a number of factors.

“Because it’s an extremely practical, roomy and durable bag, Le Pliage appeals to a large segment of customers—from schoolgirls to more mature ladies, working-class women to fashionistas,” he said. “And it seamlessly complements other brands. You see a lot of women carrying a Longchamp Le Pliage with their Hermés and Chanel.”

Combining army-grade nylon with fine but sturdy and scratch-resistant leather proved to be a winning combination. And the fact that it’s light and foldable makes it a sophisticated choice not only for traveling, but also for shopping.
Such was Le Pliage’s success that it took designers at Longchamp a long time to produce a follow-up. It finally came in 2012 with the launch of Le Pliage Cuir (leather).

Light, roomy, foldable and attractive, it has all the attributes of its predecessor except for the material.

In lieu of nylon, Le Pliage Cuir is made of pure and supple Metisse leather sourced from goats and lambs. To make it more convenient for its wearer, the bag’s designers added a shoulder strap.

Longchamp had been working on the Le Pliage Cuir for quite some time. But it was difficult to find the right leather that was light, resistant and durable.

“In line with Le Pliage nylon, it also had to fold. Finally, in 2012, they found the right leather for the bag they had in mind,” said Severin, as he pointed to a passerby with a red Le Pliage Cuir slung on her shoulder.

What he saw outside the interview venue proved his earlier point: Filipinos not only have the appetite for luxury goods, they also possess a certain joie de vivre for dressing up and looking good.

“Compared to some countries, you can see that the Philippines is hungry for these products,” he said. “It’s a growth area.”

But brands like Longchamp don’t rely on economic growth alone when they decide to open stores, Severin added.  There are some countries which are also doing well economically, but for some strange reason their people aren’t so much into luxury shopping.

“From what I’ve seen so far, that’s not the case in the Philippines. Filipinos love to shop, dress up and enjoy life. Now is the right time to be in such a dynamic market,” he said.

Longchamp isn’t exactly new to the Philippine market. Rustan’s has been selling its bags for nearly two decades.  The brand is still available at Rustan’s branches in Makati, Shangri-La Plaza and Ayala Center Cebu.

Longchamp is now represented locally by Stores Specialists Inc., sister company of Rustan’s and one of the country’s leading retailers of luxury and specialty goods.

Introduced only last year, the bag is made of cowhide or leopard-print faux fur. Unlike its predecessors, the trapezoid-shaped bag with a trompe l’oeil flap can’t be folded.

For an additional P300 to P700, customers can also have their names or initials either embossed or embroidered on their Le Pliage nylon bags.

The personalized service with an option to incorporate a contrasting nylon panel in the middle of the bag takes almost two months to finish, since orders are done in France.