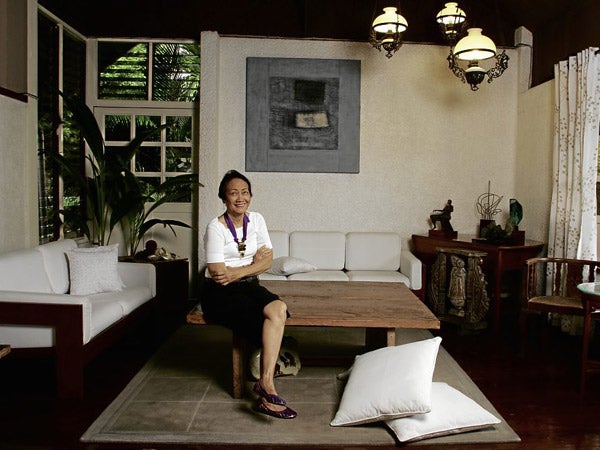 Ner in front of her favorite painting by Lao Lian Ben

For Sonia Ner, life began after 60 when she left the office environment and worked at home on her dream projects.

“I’m proud to be 72,” she declares. “What’s wrong with growing old? Age brings with it a certain freedom. You’re free from angst and desires. You take things as they are. As they say, go with the flow. There’s a certain pride that I’ve seen it all.”

In the past few years, Ner has been at the prime of her life, churning out some 50 books she has produced, written or consulted on. With her as project director, some of these art/history coffee-table books have garnered awards.

Research has been the crux of her life. For 28 years, Ner taught history and art history at Maryknoll/Miriam College.

“They all remember me as a disciplinarian. My emphasis was on quality of thinking,” she recalls.

In the late ’80s, she became a researcher for Gregorio Brillantes, who was working on a paper on science and technology in the Philippines, funded by the Filipinas Foundation. When there was an opening for director and chief curator at Ayala Museum, Ner took the chance. She also served as consultant to Ayala Corporation’s corporate relations and executive director of Asia Society.

“Corporate life is demanding but it teaches you excellent work standards. You get to know the people above you and lead the people below you. After a while, you ask yourself, ‘Do I want to do this for the rest of my life?’”

Nonetheless, her museum stint honed her entrepreneurial skills and trained her for book projects. As scholar of the JP Getty Foundation, she went to University of California Berkeley to study Museum Management. She realized that an art facility shouldn’t depend completely on arts patronage. To be sustainable, it must also be supported by the public through professional operations.

While working for the museum, she was project director of the book “Arturo Luz,” written by Cid Reyes. A collaboration with Ayala Foundation, Globe Telecom and Crucible Gallery, it laid the foundation for future projects.

Upon reaching 60, Ner transitioned from corporate life to freelancing. It was a painless move, she says. “When I got out of the museum, people came to me saying they were happy to know I’m free to work on their projects. I was happy with the reception.”

As project director, she worked closely with diplomat and art historian José Ma. Cariño on “José Honrato Lozano: Filipinas 1847,” which is based on the watercolor album of Lozano, a proponent of the letras y figueras style. The images were sourced from Biblioteca Nacional de Madrid.

It received the Alfonso T. Ongpin Award for critical research from Manila Critics’ Circle. In the collector’s market, the book fetches P20,000.

Another collaboration with Cariño produced “Album: Islas Filipinas: 1663–1888,” which featured paintings and sketches of Philippine life by prominent artists, such as Damian Domingo, José Honrato Lozano and Justiniano Asuncion, that were then popular souvenirs. The book’s original price was P2,800. But in the collector’s market, it now costs as much as P15,000.

“A big-time publisher lifted photos from our book and passed them off as having been permitted by the artists’ families. We had to pay so much to get the written consent from our sources—like $250 for a letras y figueras artwork from the Peabody Museum. I had to develop a relationship with the owners abroad,” she says.

With Cariño and other prominent writers, she came up with “Portraits of a Tangled Relationship: The Philippines and the United States.” It was a powerful and graphic reinterpretation of the historical love-hate relationship between two countries.

“I’m proud of this book. It show our ties in a photographic and succinct way,” says Ner.

Randy Yang, owner of Crucible Workshop, also tapped her to lead the coffee-table book project “Anita Magsaysay-Ho: In Praise of Women.” Although Alfredo Roces had written the eloquent text, Magsaysay-Ho wanted her own voice heard.

Spending time with the artist, Ner showed the artist photographs of her works.  Magsaysay-Ho let her guard down and started talking about her technique, her life and the subject matter. In the book, the painter’s quotes describe the images. “The book became hers and Roces’,” says Ner.

She has done several projects for Sen. Edgardo Angara. “Baler,” a travelogue of his hometown, garnered the National Book Award for Travel from Manila Critic’s Circle. Ner then broached the idea of a coffee-table book on maps, since he was an avid collector. “Mapping the Philippines [Cartographic Material]: the Spanish Period” was authored by Angara, Cariño and Ner.

Her collaboration with Angara led to another book, “Manuel Luis Quezon.”

“They both came from Baler,” says Ner. “Angara believed Quezon implemented some of Rizal’s ideas, such as the national language, Filipino leadership and social justice.”

In her research, Ner discovered that Quezon’s wife Aurora was a feminist. “She was the first to push for women’s suffrage. She championed the welfare of women and children and established the first puericulture centers and White Cross.”

As project director, Ner made sure the writers, researchers, indexers, photographers and layout artists were compensated properly.

“As consultant, I just help in the process. As they say—I help land the plane.”

She has also helped in the opening of museums in Baler, Davao and the Aboitiz Clean Energy Museum.

She’s got her hands full. For Angara, new books on former first lady Aurora Quezon and on galleons are in the works.

Ner is also working on other upcoming books on artist Phyllis Zaballero, journalist Chino Roces, National Artist for Architecture Pablo Antonio and the town of Pila, Laguna. She says the books must project the beauty of the Filipino spirit.

“People comment that my books are elegant. If I’m not happy with them, what’s the use of cutting down trees and making paper?”

For Ner, there is pleasure in working at home in the suburbs. Between deadlines, she’s planning the menu and table settings for guests.

For a quick snack, walnuts, prunes, grapefruit, eggplant tapenade, tomato with cilantro and pesto are served in little bowls, adorned with dill and ylang-ylang from the garden.

The non-vegetarians will be happy with tinapa and chili con carne.

Last summer, Ner counted the dollars she had saved from her corporate life.

“What would I do with this money on my death bed?” she said.

She then treated her sons, daughter-in-law and grandchild Maia Syquia Ner to a 21-day trip to Europe.

The idea was to see the world from the eyes of a 10-year-old. When two friends learned of their trip, they gave Ner some pocket money to treat the family to unforgettable meals. The blessings were consumed in Nice and Barcelona.

“It was so much fun! I would mortgage the house for this experience,” she says. “I’m enjoying my life now. It couldn’t have been better.”