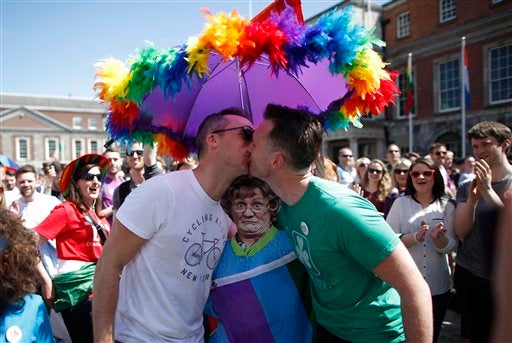 Two men kiss as first results start to filter through in the referendum, Dublin, Ireland, Saturday, May 23, 2015. Ireland has voted resoundingly to legalize gay marriage in the world's first national vote on the issue, leaders on both sides of the Irish referendum declared Saturday even as official ballot counting continued. AP

Ireland on Saturday became the first country in the world to approve gay marriage by popular vote as crowds cheered in Dublin in a spectacular setback for the once all-powerful Catholic Church.

With ballots in 40 out of 43 constituencies counted, the “Yes” vote was ahead with 62.3 percent, official figures showed, and public broadcaster RTE said the result from the ongoing count was now certain.

Hundreds of “Yes” supporters gathered in the grounds of Dublin Castle cheered and waved rainbow flags as the results came through.

“It’s an amazing day to be Irish!” said Rory O’Neill or “Panti Bliss”, Ireland’s foremost drag queen and a leading “Yes” campaigner, as she arrived at the party wearing a figure-hugging dress and high heels.

“I’m just so happy I could burst. We were voting on whether we were equal in our own country,” said O’Grady, wearing a “Yes Equality” T-shirt.

Legalising gay marriage is a seismic change in Ireland, where the Church remains a powerful force. Homosexuality was illegal until 1993 and divorce until 1996, and abortion is banned except where the mother’s life is in danger.

“I think the Church needs to do a reality check right across the board… Have we drifted away completely from young people?” he said.

“It’s a social revolution that didn’t begin today,” said Martin, who had called for a “No” vote arguing that gay rights should be respected “without changing the definition of marriage”.

Health Minister Leo Varadkar, who became Ireland’s first openly gay cabinet minister when he came out this year and is tipped as a future leader, also said the “Yes” campaign had been a “social revolution”.

“We’re the first country in the world to vote for marriage equality by popular vote and to enshrine it in our constitution,” he told RTE.

The referendum has pitched traditionalists including the Catholic Church against those in favour of gay marriage, including Ireland’s Prime Minister Enda Kenny, a Catholic who told voters there was “nothing to fear” in a televised message on Wednesday night.

A string of Irish celebrities have also backed the “Yes” campaign including singers Bono and Sinead O’Connor plus actor Colin Farrell.

The Catholic Church campaigned strongly for a “No” vote, insisting marriage can only involve a man and woman, drawing support from many older voters.

The majority of Irish people identify themselves as Catholic, but the Church’s influence has waned in recent years amid growing secularisation and after a wave of child sex abuse scandals.

Around 3.2 million people were eligible to vote in Friday’s referendum, and the national turnout was relatively high at over 60 percent.

The issue has drawn intense interest on social media under the hashtag #MarRef and was the second most popular trending subject on Twitter Saturday.

Many young Irish voters had been posting selfies of themselves returning from overseas by plane and ferry to vote in favour of gay marriage.

Ireland will be the 19th country in the world to legalise gay marriage, and the 14th in Europe.

Parliament first has to pass specific legislation and is expected to draw up the bill this week. The first same-sex weddings could then take place in Ireland towards the end of the year.

Across the border in Northern Ireland, gay marriage is banned even though it is legal in the rest of the United Kingdom.

The historic shift brought up raw emotions at the gathering in Dublin Castle, the former centre of British power in Ireland.

Karen Brady, 27, said she had flown home to Ireland from Vancouver in Canada for the referendum.

“I voted with my parents — it was such a memorable and moving moment,” she said.

“I was nearly in tears because a few years ago, Ireland was not like that and my parents would not have accepted me. But Ireland has changed.”

US Supreme Court to decide whether gay couples can marry