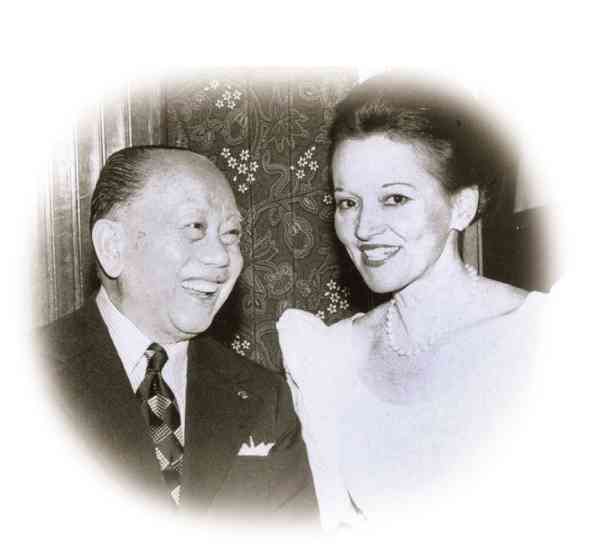 WRITER Beth Day and Gen. Carlos P. Romulo at the Waldorf Astoria in New York, 1979 PHOTO FROM THE BOOK “THE WRITER, THE LOVER AND THE DIPLOMAT”

Theirs was an extraordinary love story, one distinguished by diplomacy and journalism, spanning continents and years, transcending age and politics. It was also a love story between two most extraordinary individuals—and one that almost became an international incident.

General Carlos P. Romulo and Beth Day Romulo were already individually famous when they met in 1957; she interviewed him for a Reader’s Digest article. Nothing romantic happened then; they were both married to other people and became good friends. But when they met again in 1972 , they were widower and widow, fell in love and married. But that’s just the beginning of a new story.

This marriage is the highlight of Beth’s new book, “The Writer, the Lover and the Diplomat: Life with Carlos P. Romulo,” cowritten with American writer David F. Hyatt and published by Anvil Publishing. This is Beth’s 29th book and will be launched tomorrow in a private event. Tomorrow, May 25, is also Beth’s 91st birthday.

“The Writer, the Lover and the Diplomat” is in many ways an accidental book, Beth said in an interview. “This is my last book, really. I don’t expect to do another one. I had this pile of notes because I wrote some kind of an autobiographical note every day and I was looking over this stuff and I thought, you know there’s a book here somewhere, but I didn’t have the energy for it.” She had been collecting the notes for decades.

Hyatt, an award-winning journalist himself, first met Beth in 1983 when he interviewed an already weak Carlos P. Romulo for four hours in Manila as a foreign correspondent for Voice of America news. In 2012, Hyatt was writing his memoir and researching the chapter about the Philippines when he learned Beth was still alive. Beth had originally turned down his interview request, but invited Hyatt to visit if ever he was in town. They discussed the autobiographical notes she was gathering.

“I volunteered to help in whatever way she felt appropriate, anywhere from cheering her on from the sidelines to total collaboration,” Hyatt said in an e-mail. “We went back and forth for a few months before we agreed on total collaboration.” Hyatt arrived in Manila in January 2013 and proceeded to interview Beth from 10 a.m. to 6 p.m. for a week. By week’s end, he had more than 25 hours of interview. Beth gave him her notes. Several months later, Beth sent more files to Hyatt’s office in Virginia.

Hyatt said he agreed to the project because he was convinced that Beth had a good story to tell. “By giving my time to this project, I felt as if I was paying back Carlos P. Romulo for all the time he gave me all those years ago,” he said. “I consider the Philippines a special place since I spent so much time there as a foreign correspondent.”

Hyatt said he enjoyed the process and loved getting to know Beth well. “Co-writing this book was a great adventure,” he said. Hyatt organized the material, plotting chapters, and they completed what would become “The Writer, the Lover and the Diplomat.”

“It moved pretty fast,” Beth said of the writing. “I was surprised how fast we were able to produce the book, (it took) less than a year.”

Beth wrote “The Writer, the Lover and the Diplomat” with the same clear-eyed, straightforward prose that she employed in earlier books like 1987’s “Inside the Palace: The Rise and Fall of Ferdinand and Imelda Marcos.” Readers will immediately notice the Reader’s Digest sense of accessibility. As noted in the subtitle, Carlos played a big role in the book. “As he said, I knew him better than anybody ever did,” Beth said. “You get an intimate up close view of him.”

The book begins with Beth and Carlos’ reunion in 1972. Their ensuing romance caused a ruckus back in Malacañang, where President Marcos is quoted by Beth as exclaiming, “Not the General!,” when he heard about Carlos’ relationship with an American journalist.

“Our relationship was not public knowledge but to Marcos it was an international scandal waiting to happen,” Beth writes in the book. “He saw it as a potential threat to his government’s ability to negotiate a new military base agreement with the US. He was adamantly opposed to it and wanted it to end.”

Carlos famously stuck to his guns. “I was startled by the whole thing,” Beth said. “I never really thought of that as part of my life at all.” She finally moved to Manila in 1973. In 1978, Beth and Carlos were secretly married in a civil ceremony before marrying in a Catholic ceremony at the Apostolic Nunciature the next year. Beth found herself in uncharted territory as a diplomat’s wife. “I never imagined being in the international spotlight or the diplomatic circles,” she said. “The stuff I wrote about was not about diplomats anyway. I didn’t know anything about that life. He (Carlos) gave me the world.”

Their enduring romance had everything to do with respect and communication: “I never thought of being a star myself. I always thought I’d like to be the member of a great team. And he was the perfect teammate because we never ran out of conversations all those years. We agreed on a lot of things and when we disagreed, we wanted to know why. He had a delightful sense of humor, better than mine. I enjoyed it. It was a great team and we were very effective as a team.”

“He was the writer, the lover, and the diplomat,” Beth wrote of the multifaceted Carlos. After all, Romulo had won a Pulitzer Prize, worked with General Douglas MacArthur during World War II and was the first Asian to be elected president of the United Nations General Assembly, going on to serve various posts during the Marcos administration as a very popular statesman.

Beth had a front-row seat watching history unfold as the General’s wife. Despite Carlos being criticized for serving with the Marcos dictatorship, she said “there were so many people saying we want someone who represented ‘them’ in the Cabinet. Because the other people in the Cabinet didn’t. And he was the one who would challenge the President about things.”

She revealed that “in 1985, they’d already killed [Ninoy] Aquino, and he was heartbroken. He was really heartbroken that it was such a mess. And I’m sorry he left before things got better.” Carlos P. Romulo died on Dec. 15, 1985 at the age of 87.

According to the book, his last words to Beth were “I love you,” mouthed from a hospital bed. It will soon be 30 years since Carlos’ death and Beth says she still misses him. “Yes, I have been alone for 30 years. Of course, he was 26 years older than I was and I just assume I’d lose him so I just wanted to enjoy the time we had together. If I didn’t want to suffer loss, I wouldn’t have been with him.”

“The Writer, the Lover and the Diplomat” is Beth’s memoir, and as such it surprises the reader with a frank, detailed and substantial description of Beth’s journey from a precocious Indiana girl to a self-assured Reader’s Digest writer and author. The best part of the journey, she said, was the independence she gained and maintained. “My motto was ‘I can always walk away.’ I had my independence—emotionally, financially, everything—at a time when women didn’t,” she said.

“What impresses me most about Beth’s story is her resilient journey from crushing heartbreak at a very young age to a purposeful life full of international travel, romance and adventure. Her life story reads like a movie script,” said Hyatt.

Ironically, the hardest experience Beth ever had to endure was taking over the Romulo household in Manila after marrying the General. “Whew!” she said. “I had no background for it and I didn’t know how to do anything. The staff wasn’t friendly when I moved in. That was rough! That was the first time I ever got into a situation where I didn’t have the answers.”

She has since made Manila her home, electing to stay even after Romulo’s death. “I really chose it. I loved New York but New York is not a place for old people. And here people are very generous and very inclusive. I have a lot of Romulo relatives who see to it that they’re in touch with me a lot of the time. It’s just a kinder situation,” she said.

She still writes everyday on her trusty IBM typewriter. “Typing has a rhythm and that affects how I work,” she explained. “I’m just used to it and can’t do it on a computer.” A self-admitted “health nut,” Beth swims every day and rides the stationary bike every evening. “As long as I’m alive, I want to feel good,” she said.

As she approaches 91, Beth felt it was indeed time to write a book about her life, as well as her life with Romulo. Of her life, she said she wanted readers to take this thought with them: “If you have a little talent and most of all you’re dependable, you can have a career. I think that’s very important. I decided that the fact that people could depend on me—I never missed a deadline, I always got stuff in on time, I would take any assignment anywhere—I think that’s the thing that makes for a good career.”

And of the General, she said: “He always said he was a small man from a small country. He really tried to put the Philippines on the international map. He succeeded to a great extent. He loved the Philippines. He was a great nationalist.” Hyatt added: “Carlos P. Romulo was a true war hero but ironically his greatest legacy is as a champion of peace.”

Her extraordinary romance with Carlos P. Romulo was a happy accident, Beth Day Romulo said. “Oh boy, that’s luck and chance. I never expected to have anything like that. I stumbled into it because of my career. As a writer, you interview and meet so many different people and that is an opportunity you don’t get in a regular job.” That is borne out in this excerpt from “The Writer, the Lover and the Diplomat”: “We had the most in common of anyone I had ever known. And our relationship was the most rewarding.”