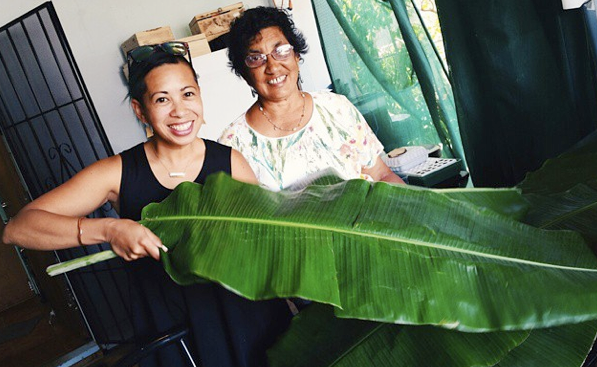 DINNER always had guests feasting on food laid out on fresh banana leaves. In North Dakota, though, since banana leaves were hard to come by, Yana Gilbuena had people eating on butcher paper.

When  Yana Gilbuena was younger, she was such a hyperactive child that her aunt was forced to keep her in the kitchen to harness all this energy. Fortunately, this sparked her interest in cooking, which eventually led to her recently concluded 50-state pop-up dinner US tour promoting Filipino cuisine.

It started as impromptu get-togethers in Brooklyn—a means for the Bacolod-born, New York-based self-trained chef to cook authentic Filipino food and provide a unique dining experience. When the idea of making it sustainable was broached and after she had been laid off, the Salo project was born.

“I explored where it could go. I did a mini-tour in the West Coast, came back to New York and couldn’t imagine myself working for a company again.”

It made even more sense when Supertyphoon “Haiyan” crippled the Philippines. “It was like a light bulb went ‘ding!’ I said, I’d do a fundraising dinner to raise money.”

Part of the proceeds went to ARK: Advancement for Rural Kids, which builds schools in impoverished areas struck by the supertyphoon and holds farming and feeding programs to sustain the communities.

“Each Salo dinner in the 50-state tour feeds 15 kids’ lunches for a year. The goal is to raise $5,000 that will enable us to build a school that can sustain itself for three years.” She was able to hit the mark in Hawaii, her last state.

Her menu largely depended on what was local and seasonal but that didn’t mean she was spared the trouble finding reliable Asian markets in the city. “There were a couple of times I had to improvise. In Key West, Miami, I literally took my cleaver and ‘harvested’ banana leaves.” All that work paid off as guests enjoyed the Filipino fare that they ate off the leaves.

“They loved sisig! The kind where there’s mayo on top. And anything guinataan. They loved humba, kaldereta, tapa, batchoy and especially the kinilaw and sinuglaw. Bulalo and other pork-based dishes were also a hit, especially anything with pork belly.”

It’s been quite a wild and exhilarating ride, one that brought fulfillment and a lifetime of delicious memories.

“In South Carolina, I met a guy who raised a rare breed of mangalitsa pigs that I had the chance to feed, chase and pet on his farm. In Alaska, I met a fishing couple who gave us two whole 15-pound salmon. They built a bonfire by the beach, and we grilled fresh salmon and ate Alaskan oysters.”

She is in Manila now to reacquaint herself with Pinoy flavors, find inspiration in local dishes, and host two dinners for food aficionados.

She will collaborate with childhood friend and executive chef Panky Lopez at Il Ponticello this Saturday, May 30, and at Your Local on Sunday, May 31.