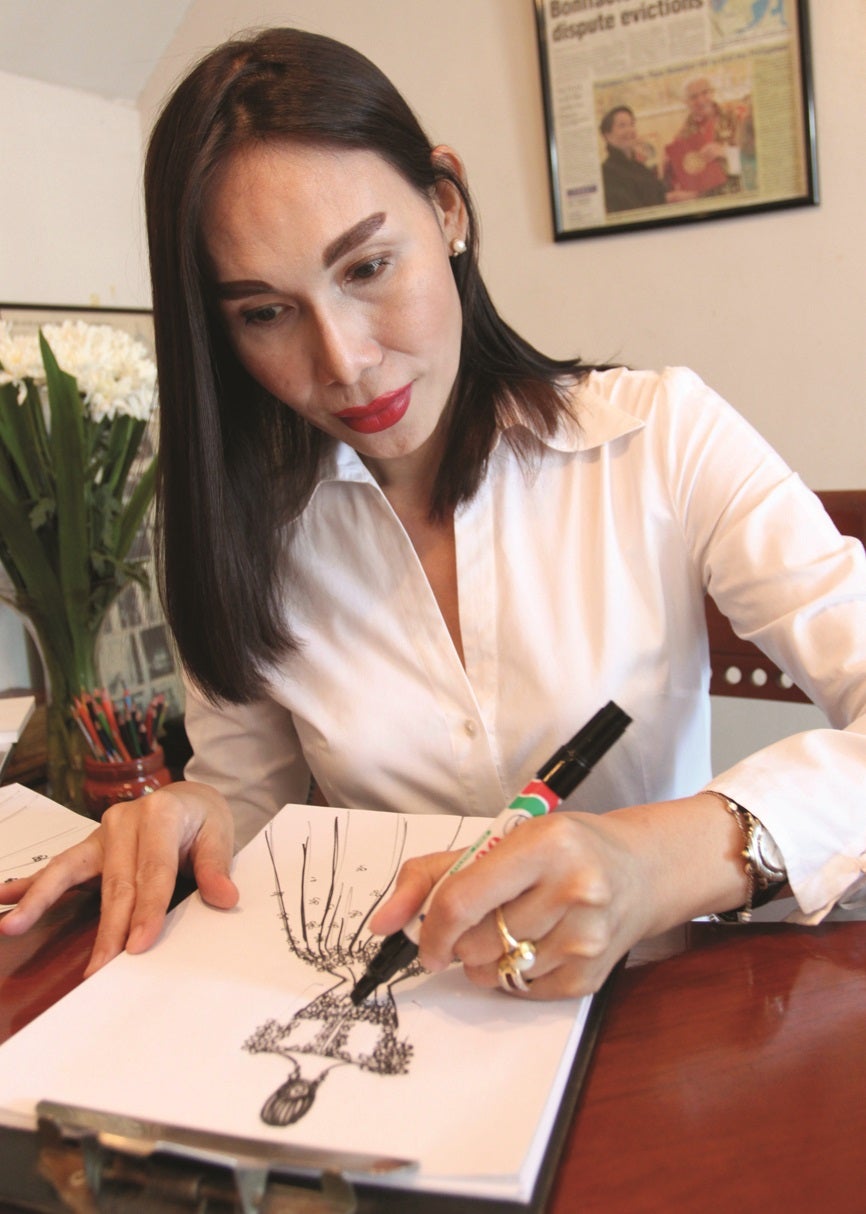 After a stint as GMA’s designer, Rem Divino is keeping things low-key

After saying goodbye to a high-flying career in Dubai, fashion designer Rem Divino has been receiving clients in a modest apartment unit in BF Homes Parañaque since 1997.

“I was probably one of the first Filipino designers to work in Dubai,” said Divino. “It was fun, and I learned a lot. But the pressure was tremendous. After a decade of working there, I finally decided to come home.”

Even during the administration of former President Gloria Macapagal-Arroyo, when he was one of her go-to designers, Divino never thought of moving to a bigger, fancier place.

“I want to keep things intimate,” he said, referring to his small shop, which combines wood and touches of Filipiniana, from made-to-order furniture from Cavite to a wooden divider accented with colorful sheets of apple glass.

Because of the publicity his work for GMA generated, business in those days doubled.

“There was a time before GMA’s Sona (State of the Nation Address) when I was holed up in this place,” he said.

Because of the news blackout imposed by Malacañang on the president’s outfit, Divino couldn’t give interviews, and every TV network’s OB van was waiting for him to step outside. He eventually gave them the slip by exiting through the back door carrying a black garment bag containing GMA’s scarlet terno.

“Imagine, I felt like a fugitive in my own shop,” he recalled with a laugh. “Business-wise, I can’t deny that the publicity helped me a lot, but it wasn’t something I wished for. I certainly don’t miss it.”

The designer devoted the first floor to a show window, receiving area and fitting room. The second floor has the production area and his private quarters.

There’s room for only a small, crescent-shaped table.

On his work desk are tools of the trade such as pencils, Pentel pens, colored pencils, bond paper and fabric swatches.

A bottle of wine with former First Lady Imelda Marcos’ visage and signature sits in one corner of the table.

Except for one medium-size pendant light illuminating his desk, the rest of the place is lit up by a series of pin lights.

In lieu of a pretty mannequin, Divino uses a faceless fitting form to showcase a two-piece lavender ensemble made of organdy and gazar from his current collection.

The rest of his clothes, which he describes as “simple, elegant and romantic,” are hung on two sets of racks.

“I’ve used these model-size clothes  for fashion shows or editorials,” he said. “I keep them on display to give clients an idea of what I can do. We can work together by fusing elements and colors that suit them.”

Despite his desire to be low-key, Divino is proud of the fact that he was once part of the country’s history.

They include front-page stories and photos of GMA during one of her Sonas, and her private audience with Popes John Paul II and Benedict XVI at the Vatican.

GMA’s “other designer” is holding on to his cozy place, which was instrumental in making all those beautiful memories happen.