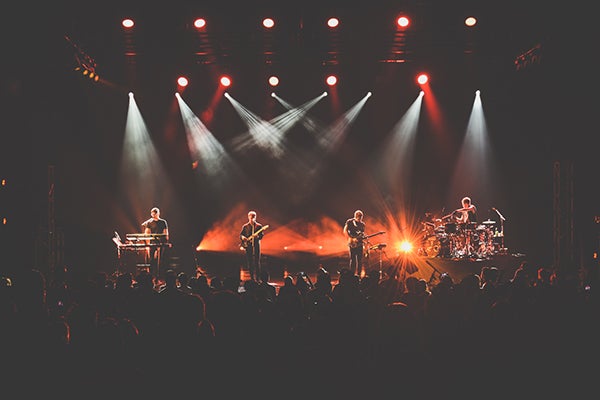 Award-winning British group alt-J at its onenight- only gig at The Theatre of Solaire Resort and Casino in Parañaque City last May 19. PHOTOS BY MAGIC LIWANAG FOR KARPOS MULTIMEDIA INC.

Somewhere on the outskirts of the bustling metro, alt-J was putting people into a collective trance. The intoxicating mix of languid melodies, seductive beats and lead vocalist Joe Newman’s hypnotic jabber was deliciously smooth and welcoming, like vodka sliding down one’s parched throat.

The British indie outfit’s brand of music may be something that’s nearly impossible to define, but whatever it is, it’s definitely something good.

Karpos Multimedia Inc., in collaboration with Secret Sounds Asia, brought alt-J to Manila for an intimate, one-night-only gig, held at The Theatre at Solaire in Parañaque City last May 19. Stylized as “?”, the band’s name is pronounced as “alt-J” after the keyboard shortcut on a Mac computer representing the triangle or delta sign, which also symbolizes change in mathematical equations.

alt-J started making waves in the UK indie scene when its debut album “An Awesome Wave” won the prestigious Mercury Prize in 2012. To date, the band has played in countless music festivals and sold out shows across continents; the Manila show is part of alt-J’s promotional tour for its chart-topping, Grammy-nominated second album, 2014’s “This Is All Yours.”

It was a rare, no-frills concert where the music truly takes center stage. There were no fancy props or backdrops, just the black-garbed foursome and their instruments facing the audience in a straight line. Except for the occasional words of gratitude, the members were perfectly content to let their music do the talking. And, boy, does it speak volumes.

The band kicked off the 18-song set with the ominous track “Hunger of the Pine,” which contained a sample of Miley Cyrus singing the line “I’m a female rebel” from her song “4×4.” The numbered seats turned out to be useless, as the mostly teen to 20-something crowd immediately rushed to the front and stayed there transfixed for the rest of the night.

The in-house light show complemented the band’s minimalist setup and matched the mood of each song. The hues changed from fiery red during the gritty, sensual single “Fitzpleasure” to electric blue during the trippy track “Something Good,” while white-hot flashes accompanied the clap-inducing, mid-tempo beats of “Left Hand Free.”

The laid-back atmosphere created by alt-J’s music afforded a nice change of pace, away from the frenzy that’s typical of rock shows. The audience was relatively well-behaved and broke into appreciative cheers only after every song so as not to ruin the magic.

The crowd momentarily went wild and sang along to the soft, sweet lullaby “Matilda.” They eventually fell back into silent awe when Unger-Hamilton’s low notes blended beautifully with Newman’s high-pitched vocals during the soaring a capella harmonies of “Dissolve Me” and “Interlude 1 (Ripe and Ruin).”

“Interlude” provided a smooth segue to “Tessellate,” a popular track which fellow British artists Ellie Goulding and Mumford & Sons had also previously done covers of. Thanks to the band’s formation, we were able to fully appreciate Green’s mesmerizing, multilayered drumming as he effortlessly switched from the sultry grooves of “Tessellate” to the more frantic thumps in “Every Other Freckle.”

That distinctive Indian flavor in alt-J’s tunes was noticeable in tracks like “Taro,” “Bloodflood” and “Bloodflood Pt. II,” while its folk roots shone in the breezy track “Warm Foothills.”

The songs themselves are rife with references to various figures from cult films and literature. The main set closer “The Gospel of John Hurt” is an ode to the actor’s stomach-turning pivotal scene in the 1979 flick “Alien,” whereas the mad love ditty “Breezeblocks” contains lines adapted from the beloved children’s picture book “Where the Wild Things Are” by Maurice Sendak.

The encore set started with a hauntingly beautiful cover of the Bill Withers’ classic, “Lovely Day,” a bonus track on alt-J’s sophomore album, followed by two songs from the “Nara” trilogy. The band aptly closed the 75-minute show with the fan-favorite “Breezeblocks,” which had the crowd singing the “Wild Things”-inspired lyrics, “Please don’t go, I’ll eat you whole, I love you so!” with feelings.

Short, sweet and awesome—this pretty much sums up the sentiments of everyone who came to see alt-J’s Manila show. For us, there was no better way to unwind on a Tuesday night than to catch an amazing live performance from a brilliant band that most people in this part of the world have probably never heard of. And, seriously, it’s about time they did.