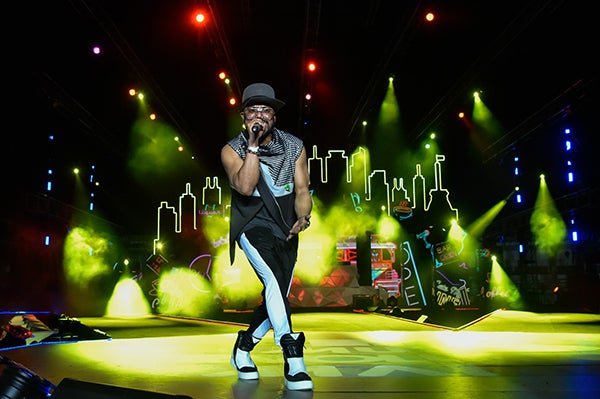 Hip-hop is everywhere, from the rhymes on the streets to the beats in our headsets. As one of the most hybrid music genres, hip-hop songs are listened to in various forms and places. Its evolution has been propelled by many things—the stories, styles and struggles.

Now take those three elements to a massive stage in the middle of Quirino Grandstand in Rizal Park, and add lights, LED screens, and a huge crowd of more than 20,000 music fans. The result is hip-hop for the people.

Gloc-9 and Abra successfully delivered what hip-hop truly means to Filipinos. Using a genre which rose from the ghetto, the two rappers treat the music as home to tell stories both personal and national in scale.

For Gloc-9, hip-hop is more than just a product of the West. He uses hip-hop as a medium to tell the rich stories of the ordinary Filipino. His songs have narratives anchored on the plight of the masses. The socially and politically loaded song “Upuan” was a symbolic way to start the evening. When he sang “Sumayaw Ka” and “Sirena,” the crowd sang along, too, a clear evidence of Gloc-9’s relatability.

“Gusto kong magpasalamat sa isang tao na kung buhay pa sana ay nasa taas din ng entabladong ito,” said Gloc-9 at one point during his performance. As homage to the country and to the Master Rapper, he went on to perform Francis Magalona’s “Three Stars and a Sun” and “Kaleidoscope World.”

Young rapper Abra, meanwhile, brought the angst from the streets to the main stage—and the result was far from being chaotic, but emancipating. The songs he performed with Loonie and Ron Henley (Biglang Liko and Cerberus) were written from the ground, but didn’t discriminate. Abra’s brand of “clean angst” takes his music to a wider audience. He also performed a medley of six songs with his group Lyrically Deranged Poets.

With a music industry turning into a market for the radio, songs are meant to sound the same. But hip-hop, in its true core, sifts through the industry’s homogeneity to give freedom to its artists. Hip-hop thrives because of freedom of style.

Black Eyed Peas (BEP) member and Filipino hip-hop artist Apl.de.Ap proved that one can travel from east to west and back and still manage to develop one’s own style.

For Apl, it’s the mix of Western beats and the Filipino culture, manifested by songs “Bebot” and “The Apl Song.” He used again this hybridity in his new single “Be” with Jessica Reynoso and the BEP classic “Where is The Love?” which they sang with Loonie and Abra.

When one says style, DJ Cash Money has his own for sure. The DJ from Philadelphia employed his famous scratch technique as he sent the audience down hip-hop memory lane, from tracks such as “Rapper’s Delight” to J.Lo’s “Jenny From the Block.”

West Coast hip-hop, meanwhile, was represented by rapper YG. He brought the original ghetto with a 15-song medley alongside DJ Goofy 500 and Slim 400.

The night’s headliner, Naughty by Nature, brought the old school hip-hop of the ’90s to the modern stage, but instead of being alienated, young fans saw that the genre, born out of turbulent times, is still relevant today.

When the group performed their iconic songs “O.P.P.,” “Jamboree” and “Hip-hop Hooray,” fans were reminded that Western hip-hop isn’t all about EDM, party and club music. Even the genre whose foundations are in struggle should be a struggle itself against the effects of commercialization. Social relevance must be the norm.

Cultural consciousness was also a theme, with Naughty by Nature featuring Francis M’s “Mga Kababayan Ko” and a snippet of “Kaleidoscope World.”

After Naughty by Nature’s set, all of the performers returned to the stage to end the historic night.

But as the confetti rained on the delighted crowd, people were reminded once again that hip-hop then and now is a progressive art—its form may evolve, but the core will always be the voice from the streets.