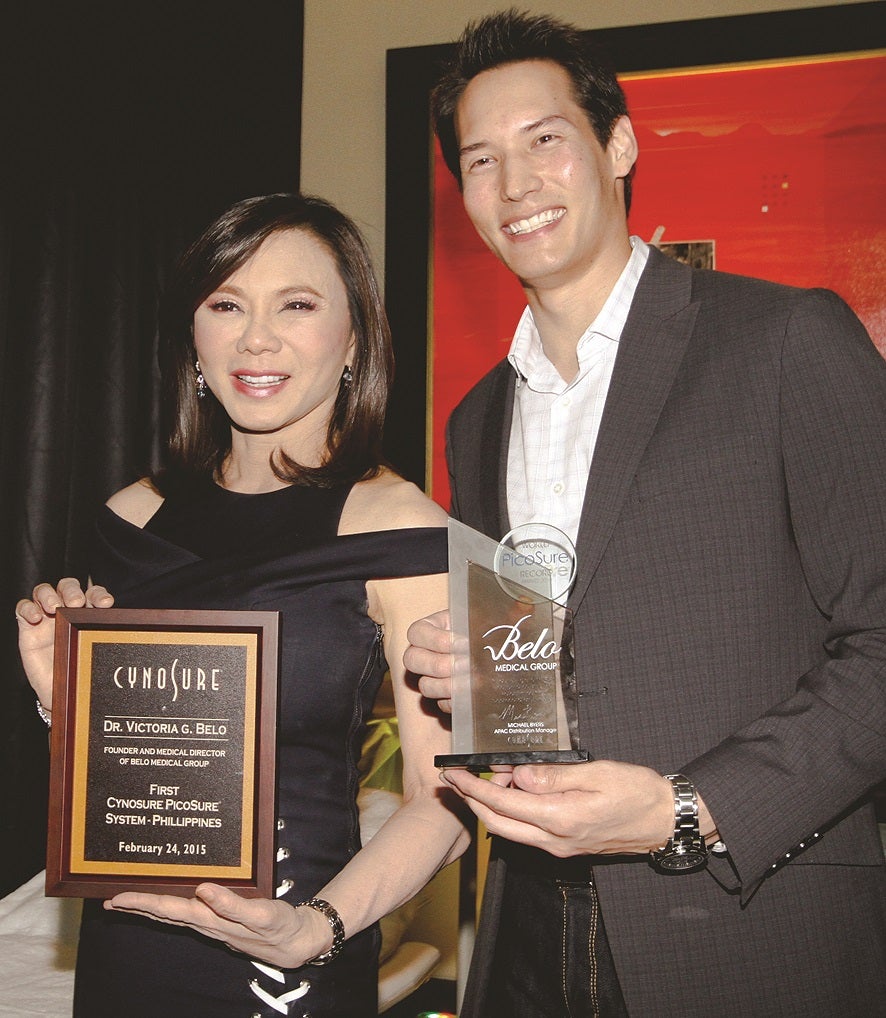 Vicki Belo breaks record for most number of PicoSure patients

If she had a car before in the form of RevLite, she now has a flying car in the form of PicoSure, said to be the fastest, safest and most advanced laser machine used to treat common skin problems like wrinkles, pigmentation, acne scars and unwanted tattoos.

Vicki Belo, the first beauty doctor in the Philippines to obtain the machine, recently launched PicoSure at Greenbelt Residences in Makati.

“PicoSure is also made by CynoSure, the same company who did RevLite,” said Belo. “Instead of the conventional nanosecond laser machine, PicoSure operates in picoseconds. It’s like having a flying car. It’s that fast!”

Since it delivers laser to targeted areas within a trillionth of a second, PicoSure can do the job not only faster, but more effectively than RevLite’s billionth-of-a-second laser pulses.

Belo introduced the machine to Filipinos as early as February. By March, she and her Greenbelt Residences clinic team had broken all existing records in CynoSure’s book by using PicoSure the most number of times on patients.

For such a feat, California-based CynoSure gave Belo two awards—for being the first to introduce PicoSure in the Philippines, and for using it the most number of times.

“In the first month alone, she has already delivered one million pulses of PicoSure,” said Michael Byers, CynoSure’s distribution manager for Asia Pacific. “Those who came after her during the same month weren’t even close.”

“Not only is PicoSure faster and more effective,” said Byers. “Because the laser pulses were shortened to within a trillionth of a second, it’s safer. It can give the desired effect on skin without the heat that comes with older laser machines.”

Previous technology relied on heat to break down unsightly skin pigments and stimulate collagen production. Instead, PicoSure uses powerful shock waves to do the job.

It was usually the heat that caused side effects such as burning, scarring and post-inflammatory hyperpigmentation. These are now eliminated with PicoSure.

“RevLite was already considered very safe, but we have taken laser technology to the next level with PicoSure,” said Byers.

Apart from rejuvenating skin by stimulating collagen production, PicoSure can also diminish the appearance of stretch marks and birthmarks. Its powerful laser can also wipe out laser-resistant red and blue tattoos without a trace.

Like all laser treatments, there’s some pain involved. The degree of pain, although tolerable, would also depend on how high the setting is. (The highest setting is usually used in treating acne scars.) Numbing cream is applied on areas to be treated an hour before the procedure.

“But compared to older machines used to address, say, acne scars such as fractional Co2 and fractional erbium, PicoSure is much less painful and has a shorter downtime,” he said.

Gone the next day

With older technologies, it usually took at least one week for the swelling and redness to subside. In the case of PicoSure, most of the redness and swelling are gone the next day.

The number of treatments varies per patient. For acne scars, for instance, the patient would need to undergo at least two to three sessions to see a noticeable difference.

Apart from stimulating collagen, which is responsible for diminishing the appearance of wrinkles, PicoSure also stimulates elastin production to help tighten skin and decrease pore size.

“Your skin can benefit from all these effects even if your objective is just acne scar removal,” said Byers. “Since the doctor is practically painting the whole face with this laser, multiple things are being addressed once you undergo the procedure.”

If there’s one area PicoSure and all other laser machines can’t address, it involves vascular problems like varicose and spider veins. People taking the anti-acne drug Accutane are also advised not to undergo laser treatments.

It took CynoSure 13 years to develop PicoSure. The company started working on it seven years after it launched the first generation RevLite. PicoSure gained US FDA approval in 2012. By 2013, CynoSure began shipping the machine outside the US.

“We built on existing technology to produce PicoSure, but we already knew that the picosecond could be harnessed to produce a more powerful and effective laser machine,” said Byers. “We just didn’t have the technology back then to make it happen.”

With the availability of more powerful laser machines like PicoSure, is invasive surgery becoming more irrelevant and outdated?

With a viable alternative like PicoSure, which can provide quicker, safer and perhaps better results, why would people have to take those risks?