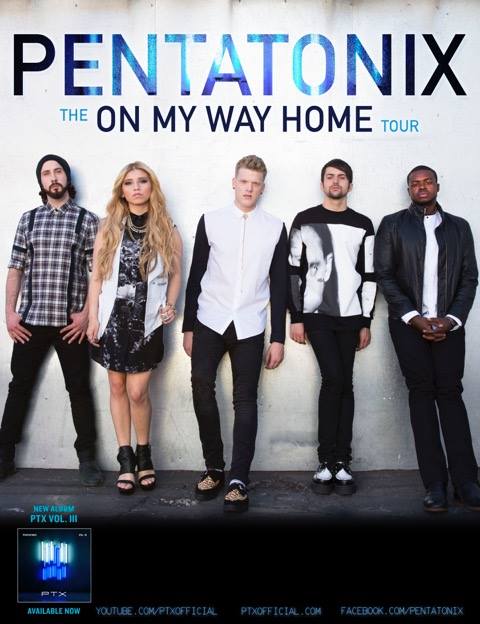 VIP and lower box tickets to the coming concert of the five-member American a cappella group Pentatonix on June 6 at Smart Araneta Coliseum have sold out, sources with direct links to the producer told the Inquirer.

A second show will be held on June 7 at Waterfront Cebu City Hotel and Casino.

The impressive ticket sales surprised the producer, the sources said, even as expectations were high that the concert would attract a sizeable crowd that was aware of Pentatonix’s popularity and achievements.

Formed in 2011, the group won first place in season 3 of “The Sing-Off” talent competition in the United States. Known for its exemplary covers of a wide range of contemporary and classical music, Pentatonix (or PTX) went on to build a solid fan base on YouTube.

Its music video tribute to Daft Punk has garnered over 130 million views on YouTube. The same track won for Pentatonix and music producer Ben Bram, won Best Arrangement, Instrumental or A Cappella at the 57th Grammy Awards.

Another album, “That’s Christmas to Me,” became the highest-charting holiday album by a group since 1962, and the fourth best-selling album in America in 2014.

The group’s recent album, “That’s Christmas to Me,” was the fourth best-selling album of 2014 on Billboard. Did you expect it to sell that much? Why or why not?

We were hoping the record would do well, but we didn’t expect it to do THIS well! It was surprising for us because a cappella records never sell that many, but we think a cappella and Christmas go hand-in-hand, so we’re happy received it so well!

Part of the group’s prize in “Sing Off” was a record deal. Why did it not push through?

I think that our previous label didn’t believe that a cappella could be the next “it” thing.

But do you consider it a blessing in disguise, because PTX went on to have millions of followers on its YouTube page.

Yes! From there, we built our own brand and took ownership of our music. I think that’s a huge reason for our success today.

How did you celebrate after winning the Grammy for “Daft Punk”?

It was so much fun! To be on a motion picture set was amazing because we had the chance to see how everything comes together to make a movie. The cast was wonderful, Elizabeth Banks was incredible, and we had the time of our lives!

The group’s “History of Music” video was very engrossing. Any particular era or genre you’re quite fond of, and why?

The title track on “That’s Christmas to Me” is an original. Does that mean we’ll be hearing more PTX songs soon?