The resurrection of the Met: Is it happening–finally? | Lifestyle.INQ ❮ ❯ 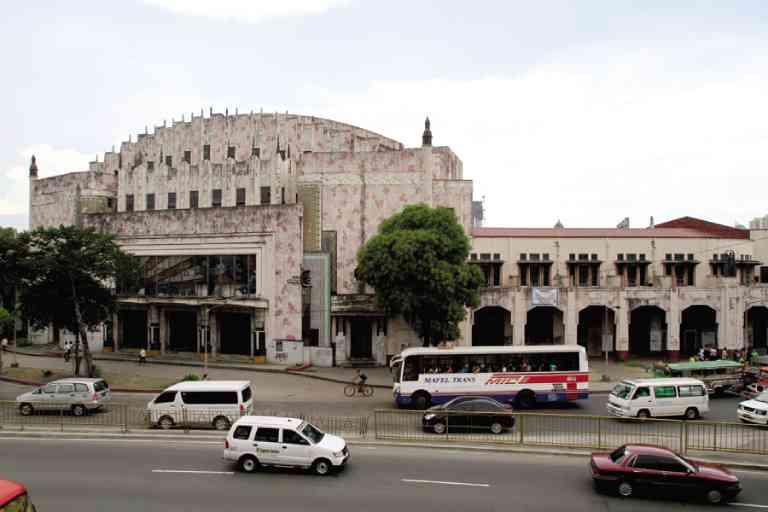 BIG PINK. The Met is still a familiar and cherished landmark in the Liwasang Bonifacio area, despite decades of neglect.

The resurrection of the Met: Is it happening–finally?

Like a derelict old carnival queen, once the belle of the ball, now fallen on hard times and forced to live amid the flotsam and jetsam of Manila’s unforgiving streets, the Manila Metropolitan Theater struggles to keep a shred of dignity despite the squalor it now finds itself in.

If the cast bronze nymphs that still hold vigil on the theater’s roof could only speak, what tales they could tell of the Met’s all-too-short zenith as Manila’s first cultural center, and its long downhill slide.

The stench of urine now pervades the main entrance where once the scents of Guerlain and Caron wafted through the air, as well-dressed theatergoers from Manila’s alta sociedad crowded to see the latest zarzuela or concert by the Manila Symphony.

Silence echoes through the halls where once great world virtuosos such as Fritz Kreisler and Jascha Heifetz filled the air with their music.

Now the only art on exhibit is the calligraphy of would-be graffiti artists who have sticker-bombed every window and spray-painted their tags on the leprous pink walls.

The only audience is the homeless who find shelter there at night, and a small measure of comfort, judging from the food wrappers and discarded underwear they leave behind.

Despite the layers of filth, decades of neglect and general decrepitude, however, the Met still impresses with the sheer amount and quality of design, handiwork and craftsmanship that went into building it.

Though a mere shadow of what it had been once, the Met has an atmosphere redolent of nostalgia for an imagined age when Manileños were a genteel breed given to cultured pursuits like going to the theater—a far cry from the impoverished denizens who now lurk in its nooks and crannies.

The Met is a relic, and like any relic, it inspires devotion.

For decades, reviving the Met has been the cause célèbre for heritage conservationists, history and architecture buffs and other members of Manila’s culturati.

Which is why members of these sectors greeted with cautious optimism the news that the National Commission for Culture and the Arts (NCCA) would be purchasing the Met from the Government Service and Insurance System (GSIS), thanks to a budgetary allocation of P270 million from the government—the Aquino administration’s largest expenditure for culture so far.

It is the first serious step taken to resurrect the moribund theater since Imelda Marcos ordered its restoration in 1978. Numerous haphazard attempts have been made since then to arrest the theater’s decline, but none have been successful so far.

“It’s great news that Secretary Florencio Abad has released P270 million to the NCCA for the purchase of the Metropolitan Theater,” says Dr. Jaime Laya, chair of Escuela Taller, a vocational school in Intramuros oriented toward the restoration of historic buildings and a heritage conservation advocate.

“It is the prime jewel of Philippine Art Deco architecture, designed by one of our foremost architects. Together with the ancient Intramuros fortifications and the neoclassic National Museum building and City Hall, the theater made Manila truly a ‘City Beautiful,’” he adds.

Inaugurated in 1931, the Met was designed by National Artist for Architecture Juan Arellano in the then-popular Art Deco style, characterized by lavish ornamentation and copious decorative elements.

According to NCCA executive director Adelina Suemith, the focus now is still on completing the acquisition.

However, she added that although there are no detailed plans as of yet, the goal is to restore it for eventual use as a performance venue, and possibly to house a school of the performing arts.

“It’s a unique building, it would be a pity if it wasn’t restored, which is why we’re happy the government acted as quickly as it did,” she says.

The building itself remains structurally sound, but the roof is in bad shape, allowing leaks and flooding the orchestra pit. The damp has also destroyed most of the contents stored in the theater, including props, stage costumes, posters and other memorabilia.

Restoration would include renewing the utilities, such as plumbing, electrical and air-conditioning systems, as well as installing new seating.

The movement to preserve heritage sites in Manila has suffered a number of setbacks recently with the demolition of the Jai Alai Building, the Army and Navy Club, the Admiral Hotel and the Chong Hock Tong temple in the Chinese cemetery.

(It is perhaps a testament to Juan Arellano’s design genius that no one has ever dared suggest bulldozing the Met to build a parking garage.)

“It’s the first good news after decades of bad news,” says Ivan Man Dy, a trustee of the Heritage Conservation Society and the tour guide behind Old Manila Walks, which offers walking tours of historic sites in the city including Intramuros and Binondo.

But, he cautions, it might be too early for high-fives just yet.

“We can restore as many buildings as we want, but if we don’t improve the environment around them as well, they won’t be sustainable,” says Dy.

Observers have noted that the entire Liwasang Bonifacio area, which includes the Met, is in abysmal shape.

New structures such as parking buildings have also reduced the greenery in the Mehan Gardens and Arroceros Park.

Restoring the Met should ideally be part of a holistic approach with an urban planning element that also involves the local government, the communities and other stakeholders, he says.

“Even if you restore the Met, if the streets around it are dark and uninviting, and the traffic bottleneck around Arroceros Street remains, people still won’t go there.”

But with the right approach, he adds, the restored Met could be the key to reviving what used to be the historic core of the city.

“A fully restored Met can certainly add luster to the area and become the key to the regentrification of the area into a cultural hub. You have the National Museum nearby, Intramuros across the street, and the old Post Office building which is also due for restoration and repurposing now that the postal service has been downsized.”

But perhaps just as important as rebuilding the theater is rebuilding the audience for theater. Writer Floy Quintos’ memoir of working at the Met in the early ’80s, published last year in Rogue magazine, is prescient:

“There has been talk of refurbishing the Met and making it a working theater again. I am convinced that this is futile. I should be the first person to rally for the nostalgic. But I say, just keep the facade and the building. Look for some means of creative reuse. Unless the people who daily traverse the area think they need to watch a play or a concert, then all efforts will be for naught. Let me be clear: It is not a matter of just reviving a theater, but reviving the habit of the theater in Liwasang Bonifacio. That will take much, much more than just a physical restoration.

“And before any more government money is spent on the shell, let the authorities try and encourage the habits that once gave meaning to this ghost of a building. Only when people crave the theater and the wonders of live performance will the Met live again.”