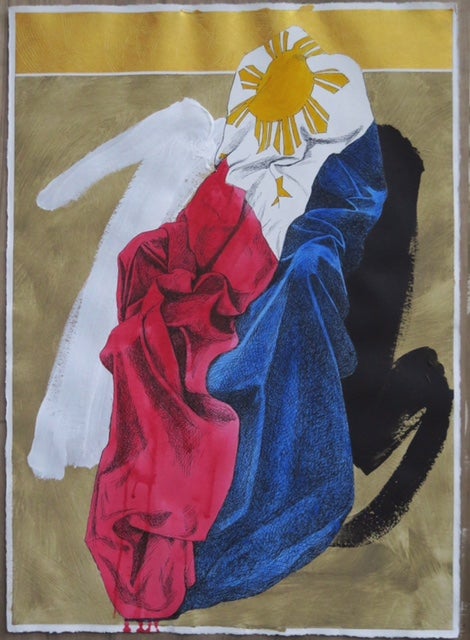 BenCab, National Artist for Visual Arts, opens his latest exhibition Ode to the Flag at the Gallery Indigo of BenCab Museum in Baguio on May 30.

Throughout history, flags, banners, pennants and insignia have identified armies and personalities, and eventually nations in times of war and peace. The Philippine flag has likewise evolved, from the establishment of the Katipunan, the revolutions against Spain and the United States that followed, and the years afterwards.

In 1975, the young artist Benedicto Cabrera made an etching, Untitled (Philippine Flag), which featured the national flag.  During the same era, he painted an image of the patriot, Macario Sakay, partly as remembrance of the revolutionary era of the nation.

In Ode to the Flag, BenCab returns to the same revolution and flag – draped, wrapped and displayed with the likes of Andres Bonifacio, remembered for instigating the war of independence, as well as other personalities. In many of the works, the flag is draped on anonymous human forms that are not seen, suggesting the countless, nameless Filipinos who fought for freedom.

After more than a century since the revolution against colonial powers, and almost 70 years since independence, BenCab’s Ode to the Flag reminds us that the fight is not yet over, and suggests that our flag, as yet, does not fly in skies that are truly free.

Ode to the Flag is part of BenCab 50 Creative Years, the yearlong celebration of BenCab’s 50th year as artist, and signals likewise the national remembrance of Flag Day on 28 May, a prelude to the 117thIndependence Day of the Philippines on 12 June 2015. The exhibition will be on view until 2 August 2015.

Also on view at BenCab Museum’s Print Gallery is World War II Soldiers in the Philippines, prints by Dan Dizon. The 27 works are signed, limited edition prints of the original watercolors executed by the artist in the 1990s, from his childhood recollection of the war.

Dan Dizon was a precocious and observant child who experienced the ravages of war in his native Pampanga. Born in 1930, Dizon’s artistic talent was nurtured at a very young age by his father, art professor Vicente Alvarez Dizon. Through his young life, Dan was inspired by his father’s art and his patriotism to his country.

During the Japanese occupation of the Philippines, some Japanese officers noticed Dan’s artistic talent and supplied him with art materials to encourage him to draw. They also posed for him in their crisp uniforms and shiny firearms. Dan discovered he could also draw detailed military equipment and vehicles from memory.

Dan Dizon is a graduate of the University of the Philippines’ College of Fine Arts, where he was a consistent university scholar. He lives and works in Angeles City, Pampanga.

World War II Soldiers in the Philippines will be on view until 30 June 2015.