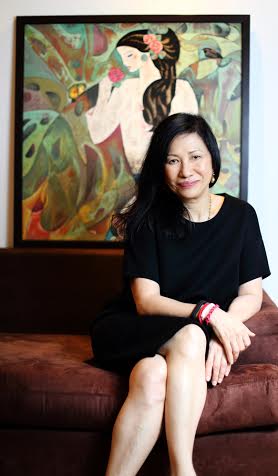 WITH some 4,000 visitors in each of its five editions, Art Apart Fair Singapore is continuously making a serious case for being the must-visit art event in Singapore every January and July.

The idea of turning a hotel into a one-stop shop for art lovers and collectors for a weekend surely has its charm, and it is but one reason why founder and director Rosalind Lim believes Art Apart Fair has achieved success.

It was in 1994 in New York City when the Gramercy International Art Fair—now The Armory Show—was conceived as a hotel-based.

The idea caught on worldwide.

In January 2013, Lim replicated the concept in Singapore when she organized Worlds Apart Fair.

But what truly drove Lim to pursue this was when she consulted a major international gallery that wanted to expand its presence in Singapore.

Handling an art client for the first time proved a challenge for Lim as she had to do heavy research on just about everything there was to know about works by established and emerging artists that included Lee Etheridge, Henri Matisse, Marie Millard, Andy Warhol, Ai Wei Wei.

“It honed my eyes, to say the least,” she said.

Young artists would approach the gallery for an opportunity to have their works exhibited but got turned away.

“When I saw that, it inspired me to create a platform that is not too expensive for both emerging and mid-career artists to showcase their works internationally,” Lim said.

So when Worlds Apart Fair opened at Conrad Centennial Singapore, the event featured some 3,400 artworks from Asia, Africa, Lebanon, Europe, the Americas, Australia.

The second edition saw the event renamed Art Apart Fair, and the venue changed to the Park Royal on Pickering, an award-winning, sustainable and eco-friendly five-star hotel that has been its home since.

In October 2014, Art Apart went overseas for the first time when it opened at the Town Hall Hotel in Bethnal Green, East London.

Though there have been concerns over the increasing number of art fairs in Singapore within the local art community, Lim said she believed that in whatever industry, competition was always good as it pushed organizers such as herself to always provide the best products and services every time.

And to make sure Art Apart Fair does just that, Lim said she was dedicated to bringing in only the best pieces from a particular geographic location with past editions focusing on Singapore, Korea and Russia.

For the upcoming sixth edition, Philippine art will be taking center stage.

Working hand-in-hand with Lim in making this possible is Mabel Guia Acosta, herself a strong promoter of Philippine art. It was through Acosta’s participation in a previous Art Apart Fair that she met Lim who was very receptive to the idea of highlighting works by Filipino artists.

A constant visitor to the Philippines, Lim has met a lot of artists and gallery owners in her effort to learn more about the country’s art culture.

“Filipino artwork has heart and soul as the happiness and the sorrow of its people are expressed through the art form,” she said.

“Filipino artists are able to produce a fusion of Western artistic composition, content, design and technique coupled with the feel of exotic, meticulous Eastern touch. My exposure to the Philippine art scene allows me to appreciate it more, and I will continue the research and promote Filipino contemporary artworks beyond the upcoming sixth edition.”

The 6th Art Apart Fair Singapore will be held July 17-19 at the Royal Park on Pickering.