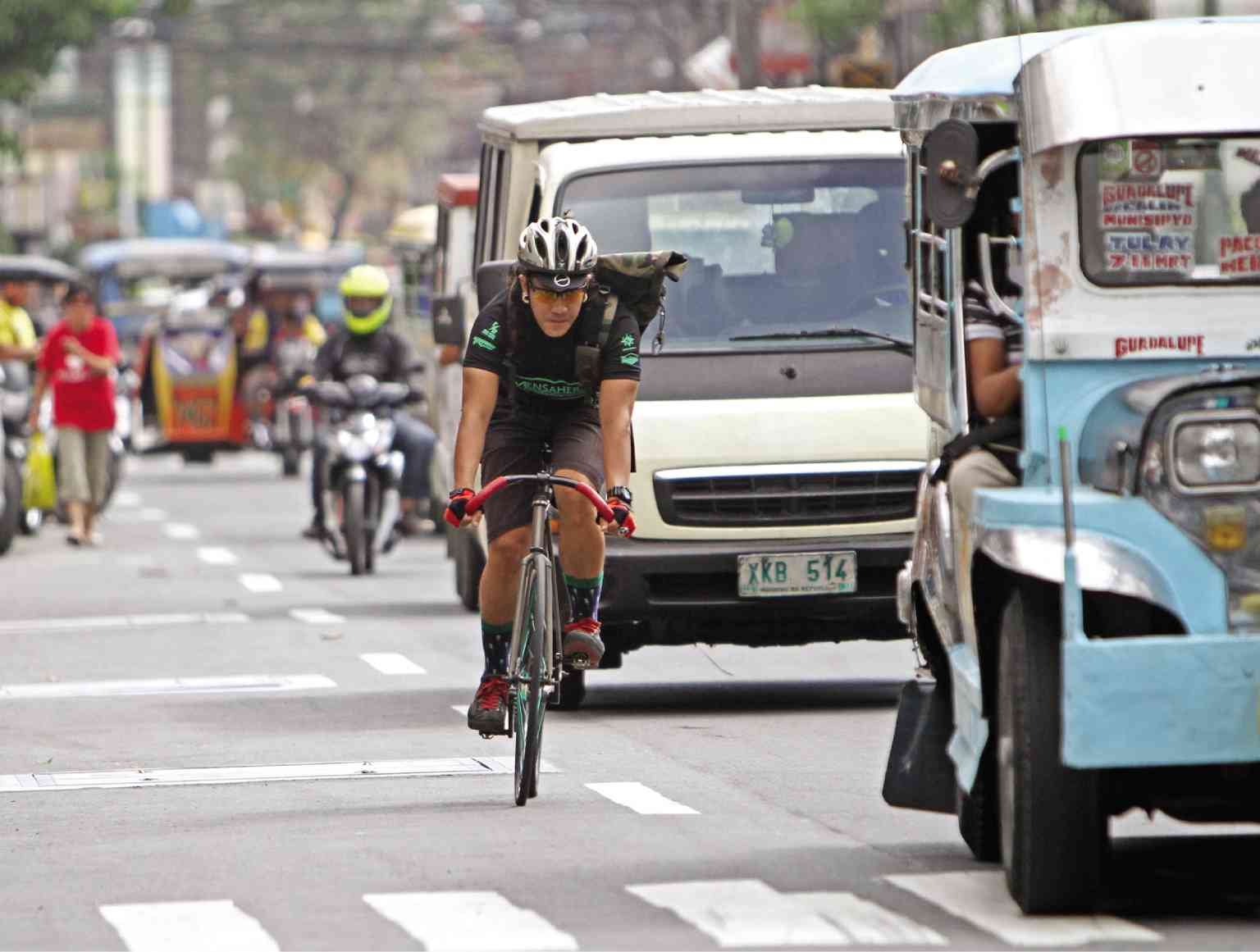 These days, nearly everything is delivered electronically.

Documents, pictures, music, money, even entire books and movies can be reduced into a digital file and zapped instantly over the Internet.

But with Metro Manila’s daily gridlock, if you still need something hand-delivered fast—meaning, in a matter of hours, not days—you need someone like Desk Mullen.

A tall, soft-spoken young man with a dyed mohawk, numerous piercings and huge quads, Mullen is one of a select tribe plying Metro Manila’s mean streets daily as bicycle couriers.

Ever since Kevin Bacon traded in his stock portfolio for a Raleigh track bike in the 1986 film “Quicksilver,” Hollywood has glamorized the urban bike messenger both as modern-day road warrior and style icon.

There is the current phenomenon of the “fakenger” or “posenger”—fashionistas who embrace messenger style and all its trappings: the fixed gear bike, the giant messenger bag, the body art, and the mixture of street clothes with serious cycling gear.

In the Philippines, of course, when you say “bicycle messenger,” you think of what used to be called a cartero, like the old guy who drops off your water bill on his ratty department store mountain bike.

The reality, says Mullen, lies somewhere in between.

“It’s not an easy job,” he says. “It sounds like a hip way to make a living, but to be honest, if you think of it as a source of income, you won’t earn enough to sustain a family.”

In the course of his career as a bicycle messenger, Mullen has been doored, floored, nearly run over by careless motorists, and once crashed into by a hit-and-run driver, sustaining serious injuries and wrecking his bike in the process.

Why do it then?

“You have to have a passion for cycling,” he says.

Assuming you don’t get killed or maimed in the process—a real possibility given the large proportion of angry, hostile and undisciplined motorists you’ll have to share the road with—you’ll also be in great shape, says Mullen, citing a fellow courier who’s 63 years old and is still able to handle the longest north-to-south runs.

Mullen, whose real name is Jason Frias, started out as a motorcycle racer before trading in his four-stroke rice rocket for a custom Ave Maldea fixed gear bicycle. A Fine Arts graduate of the Philippine Women’s University, he was a graphic artist before trying out as a bicycle courier for one of the country’s first formal bicycle messenger companies.

Last November, he struck out on his own and started Mensaheros with three other riders.

Operating out of his Pasig City apartment, Mullen also serves as the dispatcher, taking calls and assigning runs.

“All of the other riders have day jobs,” he explains. “One is an event coordinator, another is a cake decorator and the third has a T-shirt printing business.”

The job requirements include trustworthiness (since deliveries include important documents and checks), a thorough knowledge of Metro Manila’s streets, and a modicum of bike skills.

The couriers keep in touch by cell phone and mobile landline, with Mullen fielding calls so pickups and deliveries are scheduled and routed in the most efficient way possible.

With such a lean crew, this also means that Mullen has to handle his own share of runs most days.

Mullen says his team’s mettle was tested during the recent holiday rush, when even the big courier companies were backlogged, and delivery times were stretched out to several days due to the huge volume.

“We were one of the few outfits still able to make same-day deliveries,” he says. “It was good because people gave us their trust even if we were still new.”

To deliver, however, meant that each rider had to make up to five runs a day, with most runs crisscrossing the Metro area.

“As much as possible, I try not to turn down any jobs, because we’re still proving ourselves,” he says.

These include rush deliveries of items ranging from 10 kilos of magazines to 60 T-shirts to freshly squeezed breast milk.

The degree of difficulty is turned up several notches during summertime, when scorching temperatures threaten heatstroke, and the rainy season, when packages have to be protected from the elements.

To this end, Mullen has equipped his riders with weatherproof messenger bags specially designed by Exonomad, another startup company based in Tondo.

He has also insisted that all of Mensahero’s riders have basic Philhealth coverage, just in case.

In the end, he says, it’s all worth it because bicycle couriers fill a real need that is not being met by established delivery services.

The fixed and the furious

UP Diliman: A Lab for Livability?