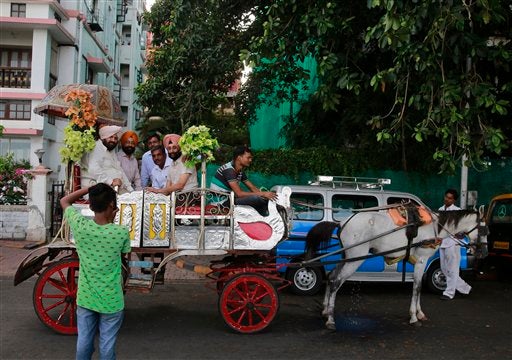 MUMBAI, India — The blingy joyrides will soon be ending in Mumbai.

Tourists hoping to roll down the city’s cacophonous streets in one of its famed, horse-drawn carriages will have to do so before June 2016, when a court has ordered the carriages be banned, saying it was a form of animal cruelty.

The single-horse carriages — festooned with bright, flashy lights, plastic hibiscus blooms and tinsel ornaments — have long been a draw for visitors to India’s cramped and cobblestoned financial capital. Known as Victoria carriages, they were once popular with wealthy families in 19th century England, and are recognizable for their large wheels and for allowing passengers to sit face-to face.

But “the activity of using horse-driven carriages only for joyrides solely for human pleasure is an avoidable activity” and “illegal,” the Mumbai High Court said in a ruling issued this week after a charity alleged cruelty to the blinkered beasts of burden, according to the Press Trust of India news agency.

The court also demanded all stables within the city be closed, and ordered Maharashtra’s state government to come up with a plan for rehabilitating both the horses and the 700 or so families who depend on carriage driving for their livelihoods. That plan is due in December.

The court stopped short of banning carriages outside of Mumbai, however, noting that horses as well as oxen and camels are still used to pull work carts and carriages nationwide.

“But if it is noticed that carriages are used for joyrides, then that should be stopped by the concerned authority,” the court ruling said.