Taking the boys away from the mainstream | Inquirer Lifestyle ❮ ❯ 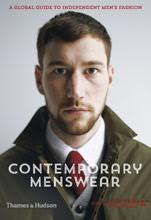 Taking the boys away from the mainstream

The new “Contemporary Menswear: A Global Guide to Independent Men’s Fashion,” (Thames & Hudson, London, 2014, 288 pages) is adorned with “over 500 images” (the book points this out twice) and a unique perspective. Put together by fashion writers Steven Vogel, Nicholas Schonberger and Calum Gordon, “Contemporary Menswear” tackles the rarified territory of brands you should know but probably don’t.

“This book is an observation, commentary and compilation of those brands and people who have shaped a new sub-culture, which, unlike many before them, transcends into more than fashion and illustrates a change in lifestyle and attitude,” Vogel writes in his introduction. “The fact is that menswear is an expression of a change of modern values, which at this point may or may not reach the mainstream. It goes beyond clothing and has from early on in its journey touched upon more than just clothing and trends.”

The authors go out of their way to explain that brands like Ralph Lauren and Levi’s are not in the book because they are not only too mainstream but people already know about them in the first place—and, most notably, they have not changed.

Thus “Contemporary Menswear” champions brands and designers who are both known for elite quality and a philosophy that’s evolved. The book takes its “global” subtitle seriously.

“Contemporary Menswear” focuses the narrative light on each chosen brand like a kind of anointing. There are straightforward descriptions, Q-and-As and photo essays.

There are actual essays on various aspects of menswear (design and retailing, for example) by Arthur Chmielewski, Minya Quark, Jeff Carvalho, Nicholas Maggio, Jian DeLeon and Mark Smith, amid contributions by the main authors.

Beyond the lookbook-style galleries and the dynamic full-color photography, “Contemporary Menswear” presents its position that jackets, shirts, pants and shoes combine to create a high-end, cutting-edge world that straddles the commercial and the creative. It’s a bit of flash and a bit of pomp amid cool clothing choices. It is, as Vogel emphasizes,  “a great representative snapshot of a hugely fascinating cultural movement and fashion that encompasses some of the world’s greatest creatives and visionaries.”