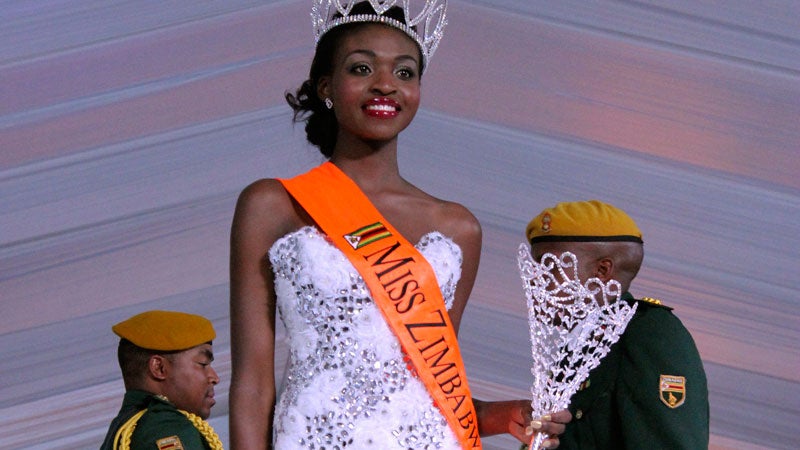 In this Sunday, April, 26, 2015 photo Miss Zimbabwe, Emily Kachote, walks on stage after been crowned. Miss Zimbabwe has been stripped of her title after photographs emerged of the now former beauty queen posing naked. Pageant organizers said Emily Kachote would no longer represent Zimbabwe in the Miss World pageant held in China later this year. (AP Photo)

Another Miss Zimbabwe stripped of her title for posing nude

HARARE, Zimbabwe — Miss Zimbabwe has been officially stripped of her title after photographs emerged of her posing nude, pageant organizers announced.

This is the second consecutive year in which a Miss Zimbabwe winner has been dethroned due to nude photos.

Emily Kachote would no longer represent Zimbabwe in the Miss World pageant held in China later this year, the Miss Zimbabwe Trust said in a statement on Wednesday.

Kachote, 25, signed an agreement ahead of the competition swearing that she had never posed nude and would not pose nude if she won the title. Contestants are also barred from dating or “making sexual advances toward anyone,” according to Miss Zimbabwe Trust rules.

“Her conduct was a precise violation of rules governing the Trust,” organizers said. Kachote will be replaced by the first runner up, Annie Grace Mutambu.

The photographs first appeared in a tabloid newspaper and then went viral on social media just two weeks into her reign. The photos were taken before she had entered the competition, Kachote said.

“I have always suspected that these pictures would circulate but it happened a long time ago,” she told tabloid newspaper H-Metro last month. “I believe my past does not determine where I am going.”