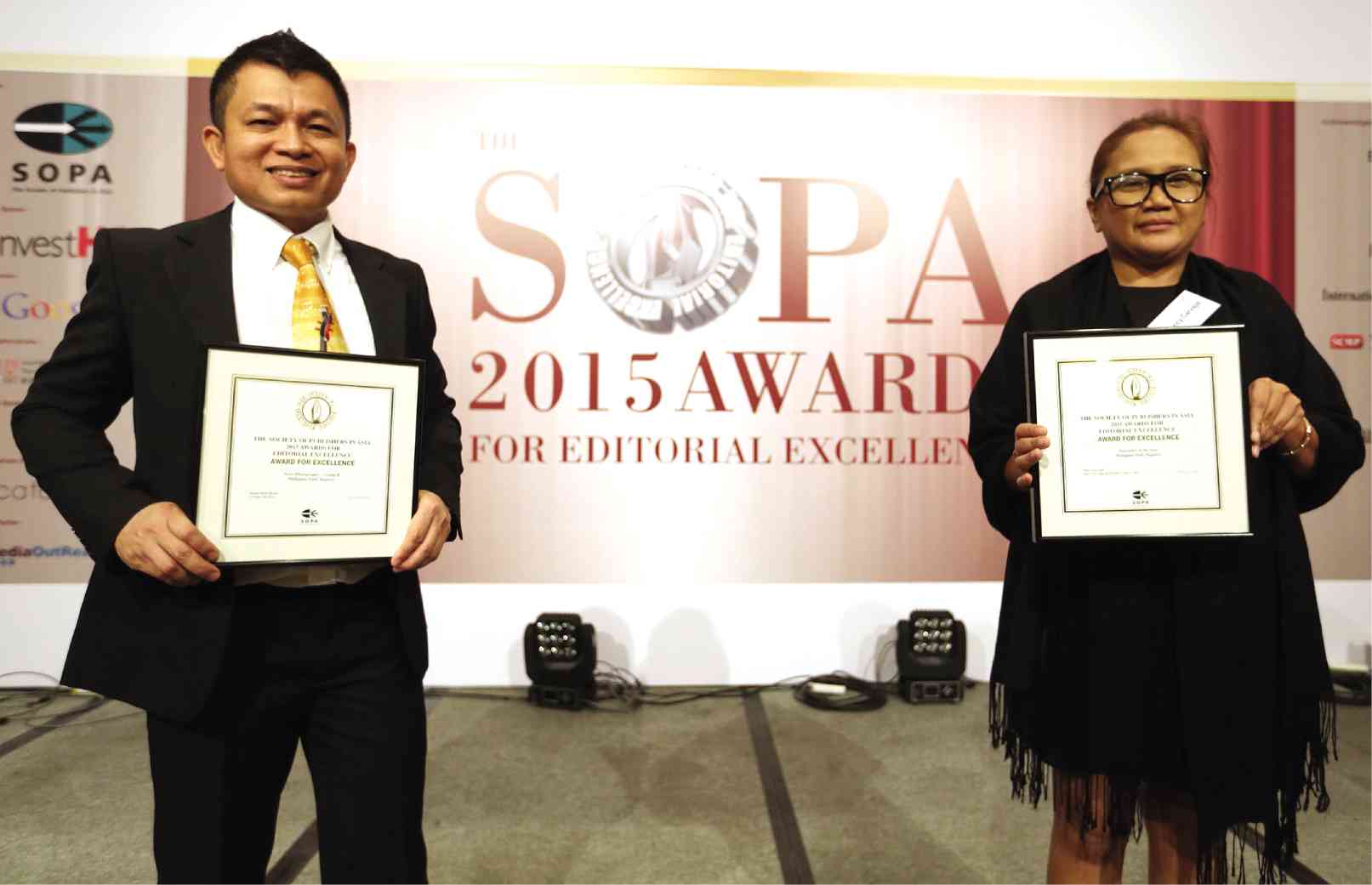 ASIA’S BEST JOURNALISTS Multiawarded Inquirer reporter Nancy Calauor-Carvajal and photojournalist Edwin Bacasmas flash their winning smiles and certificates after being named Journalist of the Year and winner of the Award for Excellence in News Photography, respectively, at the prestigious Society of Publishers in Asia (Sopa) 2015 Awards for Editorial Excellence, which honor the best journalism in the Asia-Pacific region. The awarding ceremonies were held at the Hong Kong Convention and Exhibition Center on Wednesday. JULIET JAVELLANA

HONG KONG—What a sweet, big night for the Inquirer!

The Philippines’ No. 1 newspaper shone among the most excellent publications in the Asia-Pacific after its reporter Nancy Calauor-Carvajal and photojournalist Edwin Bacasmas were named the best of their peers in the region.

Carvajal was the biggest winner at the 2015 Awards for Editorial Excellence of the Society of Publishers in Asia (Sopa) when she was named Journalist of the Year, the most-coveted award given at the end of a glittering three-hour gala dinner at the Hong Kong Convention and Exhibition Center on Wednesday.

The judges described Carvajal’s winning body of work as a “courageous and excellent work in exposing official corruption in a country where journalists face death and physical attack.”

Bacasmas, a multiawarded Inquirer photographer, won the Award for Excellence in News Photography for Category B (newspapers that circulate in one or two countries) for his photo titled “Home Street Home.”

“The image of children sleeping in a cart reinforces the PDI’s headline and the plight of millions of poor Filipinos,” said the judges on Bacasmas’ winning entry.

Bacasmas made his way to the stage still clicking his camera, prompting one of the Sopa officials waiting on stage to award him to remark, “He’s still taking pictures!”

Bacasmas, a Hall of Famer at the Catholic Mass Media Awards, among his many awards, beat the South China Morning Post and Coconuts Media, both of which entered outstanding photos of Occupy Central, the democracy rallies in Hong Kong.

The photo of a big family sleeping in their home—a makeshift cart in one of the streets in Makati City—trumped the rest as the most outstanding news photo of the year in Asia. It came out as the wallpaper on the Oct. 28, 2014, issue of the Inquirer, to go with the day’s top headline: 15M kids hungry—Poe.

Journalists, editors and news executives from Asia’s leading publications gave Carvajal a big round of applause as she claimed the award for her outstanding body of work covering her continuing exposés on the multibillion-peso pork barrel scam involving lawmakers and the allegations of corruption against Vice President Jejomar Binay.

Her entries included parts of her 13-part series on the digital files of pork barrel scam principal whistle-blower Benhur Luy, which contained details of where more than P10 billion in pork barrel funds meant for projects for the poor were diverted to accounts of businesswoman Janet Lim-Napoles and to senators, congressmen and local officials.

Her other entries were her exclusive stories on the 350-hectare Batangas property allegedly owned by Binay and the P4-billion kickbacks from 10 infrastructure projects that allegedly went to Binay, when he was Makati mayor, and other city officials.

Carvajal had won major Philippine journalism awards for her original groundbreaking series on the Napoles pork barrel scam, including Most Outstanding Journalist of 2013 from the Center for Media Freedom and Responsibility.

Unlike in the past years, Sopa this year awarded only one Journalist of the Year across the three award categories for editorial excellence.

The rest of the 18 award categories were divided into three groups:

As master of ceremony Tara Joseph, chief correspondent of Reuters TV Asia, read the three finalists for Journalist of the Year at the culmination of the long night, Carvajal and the Inquirer team present turned into a nervous wreck in a hall filled with perennial winners from Asia-based international media giants such as the International New York Times, Wall Street Journal and Bloomberg.

But when Joseph uttered the first syllable of the winner’s name, Carvajal leapt to her feet in triumph. Bacasmas and the support team—research head Miner Generalao, reporter Christine Avendaño and this writer—screamed and shouted in the stunned room, which was illuminated by two giant screens where Carvajal’s name and sample work were flashed.

Even the table beside us—occupied by journalists of the New York Times—joined in the hearty applause, as did the rest of the audience as Carvajal confidently took center stage to claim her very well-deserved award—a simple framed plaque. Sopa chair Raymond Warhola, Sopa Awards chair Tom Leander and Jimmy Chiang, associate director general for investment promotion of Invest Hong Kong, presented the award.

“Can I? Over dinner I scribbled some notes,” Carvajal quipped, clutching her plaque, as Joseph asked her if she could say a few words as the star of the night, eliciting appreciative laughter from the crowd of around 300 foreign and regional journalists.

“To be a finalist with Hanna and Jonah is honor enough, but to receive the Journalist of the Year award from Sopa—the feeling is indescribable,” Carvajal, her voice cracking, said as the audience listened to her intently.

“When I wrote the story exposing the misuse by some legislators of their pork barrel, I did not think of any award,” she said. “But I wrote it in the tradition of the Philippine Daily Inquirer’s brand of reporting. The exposé led to the investigation and arrest of three popular senators and a number or congressmen and also led to the declaration of the pork barrel as unconstitutional by our Supreme Court,” Carvajal said.

The audience then gave her a bigger applause and a standing ovation.

Carvajal was besieged by a line of admirers and well-wishers well into midnight, including finalist Kessel who graciously went over to her seat to personally congratulate her. “I am honored to shake your hand,” Kessel said.

Kessel’s stories included a documentary and well-written features on oil tensions, jade trade exploitation, and e-cigarette boom in China and his profile on Joshua Wong, the leader of the student movement for democracy in Hong Kong.

Sopa officials invited Carvajal to hold a lecture at the University of Hong Kong in October. Hong Kong University’s Journalism and Media Studies assisted in the judging process. A number of media outfits and consultancies approached us to say they want to get to know the Inquirer a little bit more or have partnerships with us.

Warhola said the awards drew a record 662 entries this year, and a distinguished panel of 112 judges analyzed and selected the entries under a very rigid set of criteria.

“Anyone reading through the 662 entries for the 2015 Sopa Awards would have to admit it was a great year for journalism in Asia,” head of judges Jeffrey Timmermans said. “Naturally, this made the judging panel’s task especially difficult this year. The 112 industry professionals and academics who volunteered as judges this year spent many hours of their valuable time reviewing the entries, and then had an often agonizing choice at the end of the process.”

Tom Leander, chair of the 2015 awards, said the distinguished panel of judges and their meticulous judging process was the guarantor of the independence and guardian of quality of the awards.

Warhola said Sopa, founded in 1982 and counts 40 local and regional media organizations, aims to celebrate excellence in journalism, bolster freedom of the press and share best practices across all local and regional publishing platforms in Asia-Pacific.

“We embrace the innovative technological advances that expand the numbers in our audience and better serve the information needs of our readers,” Warhola said in his message.

“The time tested maxim holds that there is power in the written word. And its inherent power is palpable: to influence, educate, collaborate, shape ideas and mold opinions,” Warhola added.

The Inquirer is no stranger to the Society of Publishers in Asia (Sopa) awards.

In 2003, the news story “Abadilla 5: Story out of martial law pages” won the Excellence in Specialized Reporting award in Category B, the award for local newspapers.

In the same year, the Inquirer also won the Best Opinion Piece in Category B for “Remembering,” written by Conrado de Quiros in his column “There’s the Rub” on Sept. 10, 2002.

Honorable mentions that year were “Seeing the world with American Eyes” by columnist Randy David (Best Opinion Piece in Category B) and the photograph “Going Off Into the Sunset” by photojournalist Edwin Bacasmas (Best News Photography for Category B).

In 2004, the five-part special report by senior desk editor Juan V. Sarmiento Jr. on the purges in the Communist Party of the Philippines in the 1980s won honorable mention for excellence in human rights reporting in the then A (regional/large publications) category.

Bacasmas won honorable mention for the photo “The Strongman Cometh,” which showed a Malacañang worker carrying the picture of a bare-chested Ferdinand Marcos, the former dictator.

In 2005, columnist Juan Mercado won honorable mention for Best Opinion Writing in Category B for his series of columns, “Treading Fine Lines,” “Lobotomized Mindsets,” “Murder with a Wink,” “Do our Clocks Strike 13?” and “Amnesia Anyone?”

In 2008, the Inquirer won the Certificate of Excellence in the scoop category for a series of reports on the P500,000 cash handouts distributed in Malacañang to congressmen and local government officials in October 2007, as the House of Representatives was confronted with an impeachment complaint against then President Gloria Macapagal-Arroyo.

The reports, which appeared in the newspaper’s Oct. 12-14, 2007, issues, were written by reporters Norman Bordadora, Christian Esguerra, Michael Lim Ubac and Juliet Labog-Javellana, all based in Manila, and provincial correspondents Tonette Orejas (Central Luzon) and Jhunnex Napallacan and Jolene Bulambot (Visayas).

In the same year, the Inquirer also won Honorable Mention in two other categories—Excellence in Reporting of Breaking News and Excellence in News Photography.

The Inquirer won Honorable Mention in Excellence in Reporting of Breaking News for its coverage of the hostage-taking of Tondo children by Armando Ducat, an engineer who had earlier put up a school for them. The stories were written by Volt Contreras, Tina Santos, Alcuin Papa, Juliet Labog-Javellana, Cenon Bibe, Allison Lopez and Tarra Quismundo.

In news photography, the pictures that won Sopa’s nod were “Hostage Crisis,” “Lanao elections,” “Wall collapses in Antipolo” and “Makati mutiny,” which saw print in the March 29, May 27, Aug. 9 and Nov. 30, 2007, issues of the newspaper. They were taken by Ryan Lim, Rem Zamora, Raffy Lerma and Bacasmas.

In 2010, business reporter Daxim Lucas won Honorable Mention for Excellence in investigative reporting for his series on the Legacy Group banking scandal. The four-part series, which appeared in January 2009, was a follow-up to a story he himself broke on the financial troubles of the Legacy group of rural banks, and exposed the underlying scheme behind the group’s acquisition spree of rural banks, which was to take advantage of the state-guaranteed insurance coverage of bank deposits.

Last year, environment reporter DJ Yap won Honorable Mention for Excellence in Feature Writing and was cited for his “vivid, impassioned, heartrending and tragic” account of his experience covering Supertyphoon “Yolanda” in Leyte in November 2013, the first time for the Inquirer to have won an award in the feature writing category.

The winning article, “Meeting a Monster,” was Yap’s account of his experience being stranded in Tacloban City for many hours after the storm smashed into the Eastern Visayas on Nov. 8, 2013.