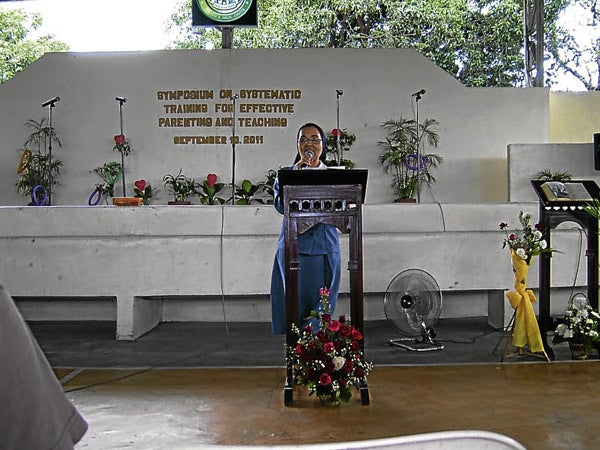 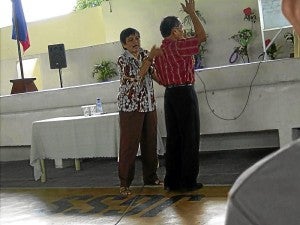 If the reason for loving someone is to keep a relationship going, there is a kind of love that nurtures in preparation for letting go—and for good.

That love, according to a couple who have been to several schools and institutions all over the country to speak on the matter, is the love that parents give their children.

“Parental love is the only [kind of] love that leads to separation,” said Raphael and Carmelita Ocoma, both in their 60s.

Married for 38 years, the Ocomas are active volunteers of Ugnayan at Tulong Para sa Maralitang Pamilya (Ugat), a nongovernment organization for family ministry and counseling services based in Ateneo de Manila University in Quezon City.

“We don’t own our children, we are only their stewards. We will eventually have to set them free,” the wife said.

The couple, who has four children—three boys and an adopted girl—spoke recently on systematic training for effective parenting and teaching in a symposium at a Catholic school in Imus, Cavite.

“Family life is difficult at the beginning, but it becomes even more difficult as it goes along. That should be the time when we should ask God’s help,” the husband said as he tried to enliven the afternoon with his deadpan jokes to an audience composed mostly of the parents of elementary pupils of Jesus Good Shepherd School. 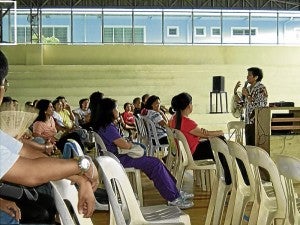 There are three kinds of children, they said, that we need to pour our love equally to—the easy child, the slow-to-warm-up child and the often difficult-to-handle middle child.

“But there are no bad children. They are only difficult to handle. What they need is compassion,” she emphasized.

The Ocomas said that when a child misbehaves, it is a signal that he is calling our attention. The lack of it results to power struggle, revenge, parental inadequacy and peer pressure.

“The paradox of the opposites is that you become the person you hate. But if you love your children [for what they are], God loves them even more,” they said.

The couple, whose eldest son is a doctor to the barrios, the middle child an engineer, the third child a chef and the adopted daughter an unwed mother, reminded parents to stop the habit of comparing their children to each other.

“No comparison. Cultivate instead the habit of reading and studying to develop their mental and emotional maturity, because as the saying goes, with high IQ one gets hired, with high EQ one gets promoted. High EQ is about being heart-smart, not book-smart.”

The family is the child’s first school, first church and the first government, they added.

One of the objectives of the gathering, according to Sr. Ales Paz Pamplona, the grade school principal, is to develop skills in handling different problems encountered by parents in rearing their children. 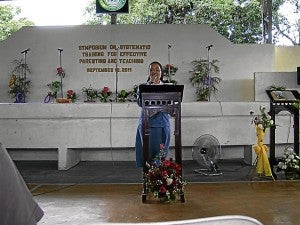 “God’s grace is always abundant if we have open minds and hearts to receive it,” Pamplona said in her opening remarks at the gym of the 46-year-old school, owned and administered by the Sisters of Jesus Good Shepherd Pastorelle in the Philippines.

Pamplona told the audience to appreciate the importance of family and life according to the faith and the teachings of the Catholic Church.

“We are called to become sowers of faith in God. If you save the family, you save this nation, the world, the Christian civilization and yourselves.”

“With easy access to information technology, children these days may be intellectually superior, yet see education as something to be endured,” Carmelita added. “The sense of gratification is important to the younger generation these days. They no longer have a sense of self-sacrifice.

“Control and cool yourselves,” reminded the husband. As parents, we should be the first to understand them, because when worrying takes control, it makes matters worse. Panicking would only add up to the “multiplication of hurting families where people feel abandoned, neglected and lonely.

“The goal during the battle is to keep your relationship with your teenagers alive. Keep in mind that problems with teenagers are merely short-lived.

“It is tempting to just give up and let them run [and ruin] their own lives, but the strongest evidence of love is sacrifice. And the severest test of loving them is to endure the pain of seeing them suffer when they get sick. But it gives life.”

One way to keep the peace, said the Ocomas, is to say the star power words to the members of our family: “I love you” for adoration, “I  am sorry” for confession, “I owe you” for thanksgiving and “please” for supplication.

“Why be forgiving? It restores honor, you get to know their history, you understand their ignorance, you set yourself free. You keep yourself beautiful. In the midst of our worst storms with our teenagers, shift from worrying to meditating, because parenting is partnership with God.”