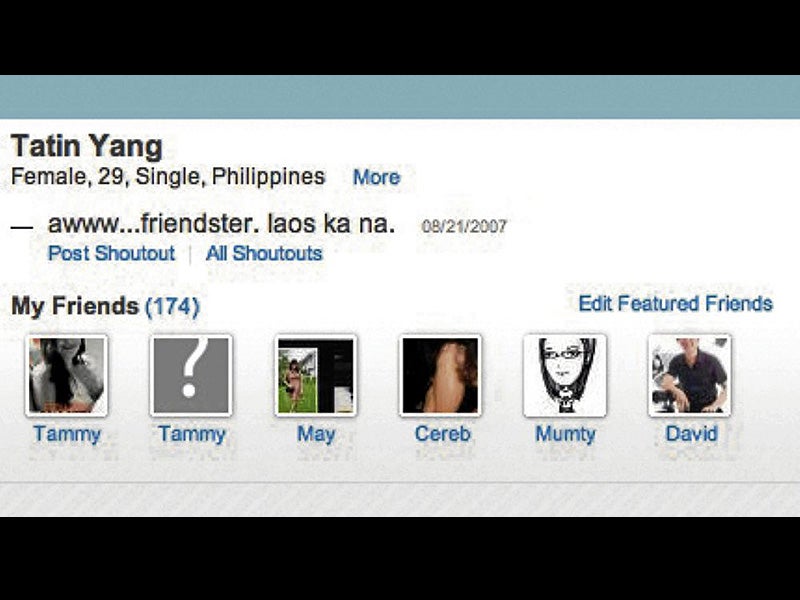 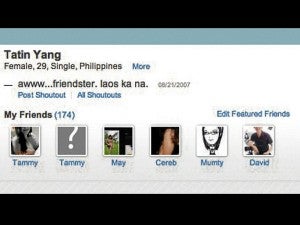 BACK when Facebook was a mere seed in the mind of Mark Zuckerberg—or the Winklevoss twins, depending on whose side you are on—Friendster was all the rage.

To the younger ‘uns who’ve never been, Friendster was the virtual hangout for everyone, and it pioneered the social network that Facebook has become famous for.

In lieu of Walls and poking, there were testimonials—long drawn-out, flowery testaments about how awesome a friend you are. There was no tagging of photos (gasp!), but you could see when your friend last logged on, so no “I didn’t read your message ‘cause I haven’t logged on yet” drama, and for a while, Friendster surprise installed a “Who’s viewed your profile” feature which drove all the snoopy stalkers, myself included, into a crazy panic. There was no Farmville, or any social game, and Friendster was essentially like a stripped-down version of Facebook.

And then Facebook happened. Its explosion on the social network scene guaranteed the steady demise of Friendster, and everyone jumped like rats from a sinking site. Pretty soon, Friendster was a thing of the past, with most of its previous members denying they were once addicted to the site.

Still, the dregs of our past profiles lived on—that is, until the end of this month. In Friendster’s efforts to clean house and revamp its site, all user data and photos will be deleted from its servers, so you still have a few days to decide if you wanna download your profile onto your hard drive, or even export it to other sharing sites like Flickr or Multiply.

For those who want to keep a copy of past profiles and photos, simply visit Friendster’s help page and use the Friendster Exporter app to perform the backup. The Exporter covers friend lists, profile information, blogs, comments, photos, messages and testimonials, and groups.

Friendster will only wipe out the contents of your profile, but your profile will remain as part of Friendster’s new, future site—that is, if you’re still interested.

How to know if you should salvage your Friendster profile

2. If you must really have a copy of that effusive testimonial from your college crush

3. If you think your Facebook profile looks cooler with an album called “Old Friendster photos”