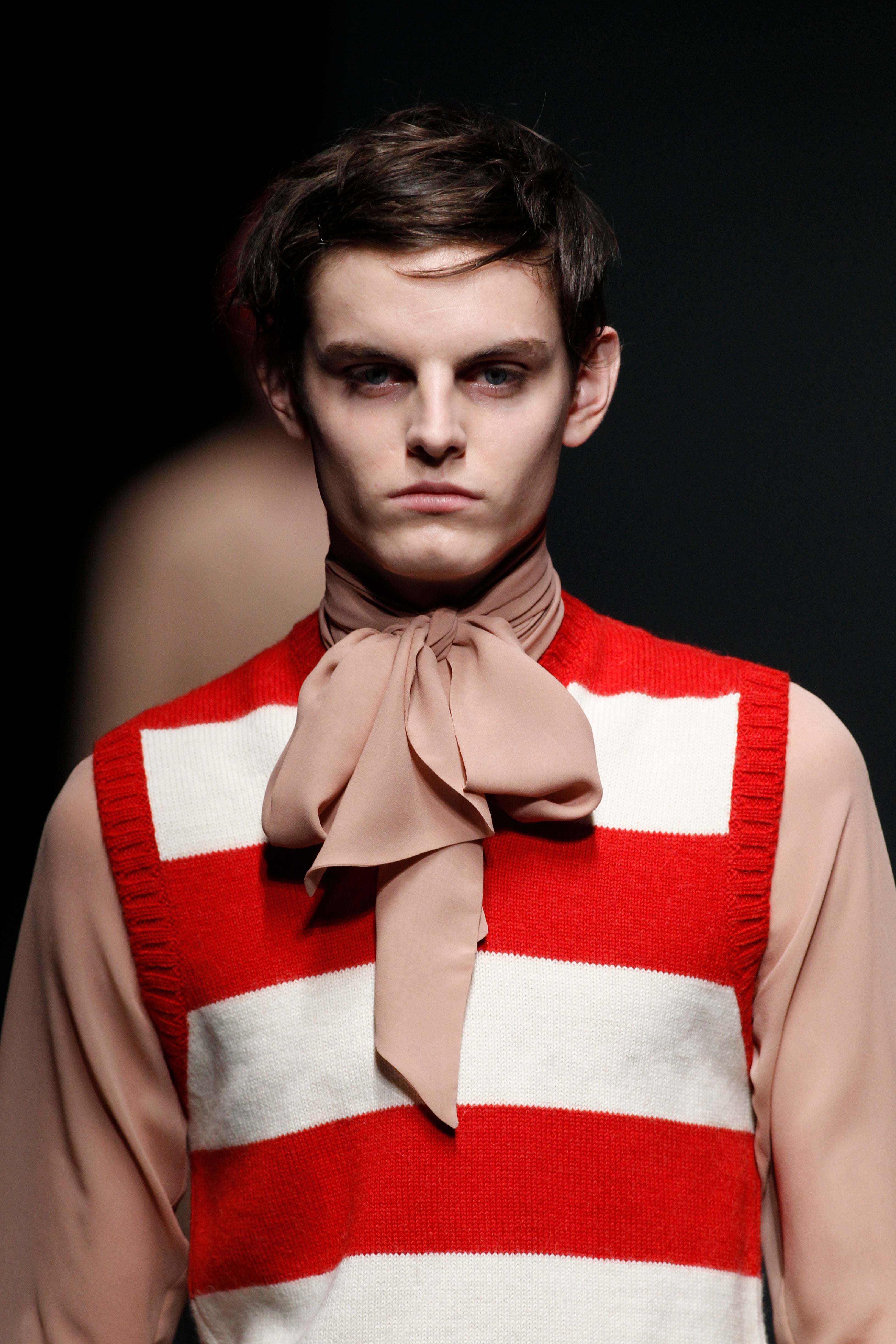 Although he chose to highlight such iconic Gucci symbols as the horsebit and GG logo in a number of bags, shoes and belts, Michele also tried to update and incorporate them with such details as hand-painted geraniums and huge embroidered bees—two recurring elements that are also found in several of his dresses and coats.

Regional lifestyle journalists got a close look at Michele’s latest collection, his second for the Italian luxury brand, at a recent exclusive presentation at the Deck in Singapore.

He ventured beyond traditional fall-winter shades like black, gray and deep teal to produce a collection of women’s dresses and separates in such colors as scarlet, hot pink, turquoise, dove gray and terra cotta.

His women’s wear collection was also punctuated with a few floral-printed pieces that were more fit for spring than winter if not for their thicker, supposedly warmer materials.

“Pops of color also give both men’s and women’s collections youthful energy,” said a Gucci insider. “See-through lace is also a recurring material in a number of pieces, including several blouses and shorts.”

The designer also chucked high heels in favor of flats, clogs and “half-moon” heeled shoes. His decision to include a number of open-toe sandals for men and women was pretty unusual given the cold season they were meant for.

He also resorted to a number of visual gimmicks such as fur-lined men’s horsebit moccasins, alpaca-made sandals and women’s loafers made of longish kangaroo fur. If not for the horsebit detail, the pair would have easily been mistaken for a blonde wig that fell on the floor.

To keep classic pieces such as suits, pants and leather ensembles from looking too predictable, he resorted to raw hems and “purposeful” creasing and fold marks. The move instantly gave certain pieces a vintage, nonchalant feel.

“It was done on purpose to actually emulate the feeling of taking out precious articles of clothing you’ve kept in the trunk for a long time,” the Gucci insider added. “It’s as if you decided to bring them out and wear again.”

He also went for classic juxtapositions by combining hard, masculine elements such as a pleated skirt made of calf leather with feminine flourishes like a chiffon blouse with grosgrain detailing, bow and detachable floral brooch.

In fact, the floral brooch done in different materials and colors give certain pieces an artisanal, couture feel.

Some of this season’s featured accessories are decidedly rich, chunky and ornate. Women’s cocktail rings, for instance, were made of carved metal in the shape of animals, including a tiger’s head.

The same element found its way into a number of men’s messenger bags made of bright suede and accented with eye-catching metal clasps.

Michele’s decision to blur gender lines was evident as early as a few months ago. In a debut fashion show in Milan featuring his fall-winter pieces, the former head of Gucci’s accessories division tapped a number of male models to wear his women’s ensembles.

In an interview for the May issue of US Vogue, Michelle’s choice to dress male models in women’s wear was “a pure recording of something that is happening around us: a strong affirmation of freedom beyond cataloging and labeling.”