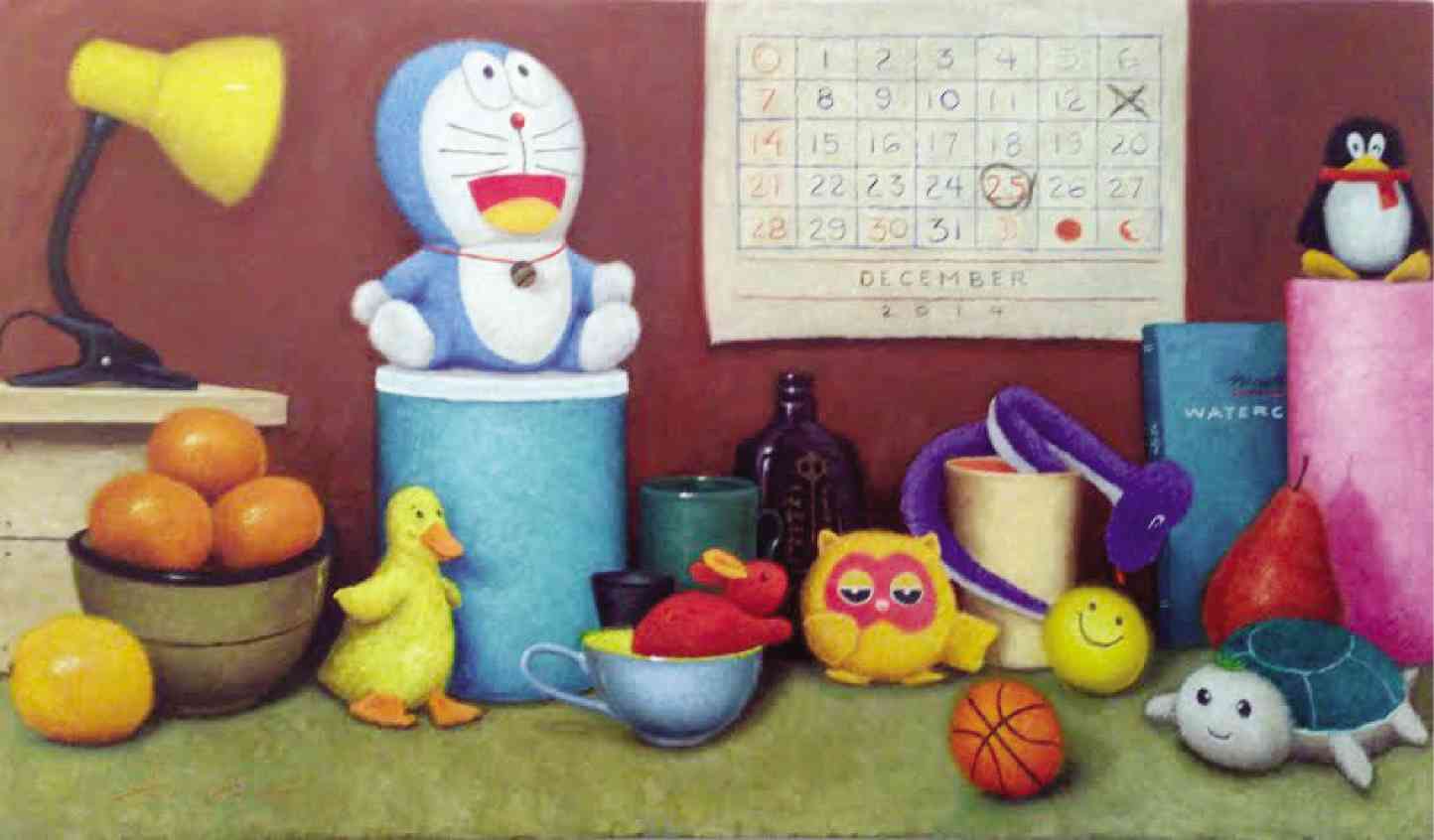 The still life remains a popular genre in the visual arts for many reasons. For one, it is a showcase of fundamental skill and technique, demonstrating an artist’s talent in composition and representation.

Still lifes, too, serve as documentations of material culture and socio-economic stature, and signifiers of epistemic ideologies as well as pivotal moments in art and history.

During the Renaissance, Leonardo da Vinci and Albrecht Durer were among the first artists to reconfigure the genre, shifting from the religious allegorical bias of previous epochs to more secular iconographies such as fruits and other natural objects.

Xander Calceta’s third solo exhibit,   “Life Still,” on view at Gallery Big until June 27, is a fanciful reimagination of the genre rendered with a contemporary sensibility that is fresh for the most part but remains faithful to this enduring art form. Kawaii meets canon in Calceta’s imagining, as academic formalities collide with the aesthetics of cuteness.

Stuffed toys are the main objects in this artist’s arsenal, virtual characters from multiple universes that breathe life into narratives of play and wonder.

A wide-eyed Doraemon ready for hugs, Donald and Daffy in mischievous flirtation and Super Mario painting a painting within a painting are but some of Calceta’s cast of characters.

Just as Vincent Van Gogh’s still life renderings of his dwellings, humble belongings and flowers are said to constitute his own “self-portrait in still life form,” Calceta’s new works allow us a glimpse into his process and realities.

Books on art laid out strategically across his compositional planes indicate an artist with a perpetual sense of curiosity and a voracious hunger for learning that makes up for the lack in formal training.

Calceta, 40, ventured into the arts professionally only in his early 30s. Still, his style bears no indication of an artistic temperament that is restless or impatient.

He relies instead on the power of subtext and the quiet but evocative significations of contrasting elements.

An odd assortment of domestic artifacts, art materials and other thingamajigs make for curious assemblages that highlight the interrelated dynamics among scale, balance and shape in Calceta’s new collection.

Here, he opts for a more impressionistic style and palette with subdued tonalities that render his works dreamlike, as though they are childhood memories, variable, shifting and not ever fully remembered.

In feudal times, artists were summoned to paint still life renditions of the elite’s wealth. Silverware, ornate textiles, jewelry were captured on canvas as displays of opulence and economic power.

Calceta’s still life evokes an altogether different symbolic currency. He locates the material in the realm of the affect, the tangible in the domain of feeling and memory.

What comes across, then, are works evocative of innocence, youthful irreverence, promise and possibility.