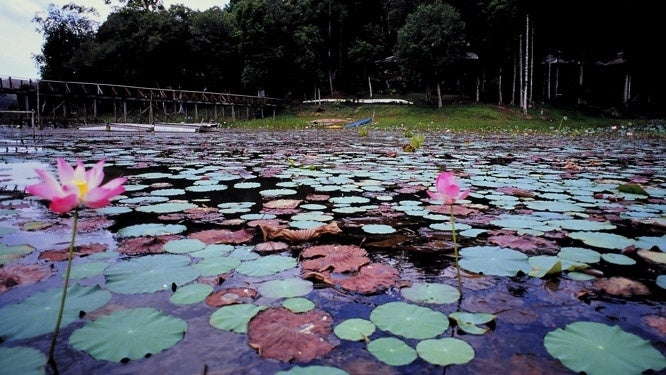 Some believe that an ancient Atlantis-like city has sunk to the deep depths of Tasik Chini. - Tourism Pahang

5 mystical places in Malaysia you shouldn’t be naked at

Respect for local traditions and customs should be part and parcel of the do’s and don’t’s for any traveller. The recent case of some climbers who decided to prance around in their birthday suits on Mount Kinabalu in Sabah is a case in point. It was no laughing matter.

There are loads of myths and legends in a culturally diverse country such as Malaysia. It shouldn’t come as a surprise then that some of the nation’s most beautiful landscapes hold the most fantastical stories. Some of these tales are made of the stuff of nightmares that give travellers the occasional heebie jeebies while others are just downright tragic. Star2.comhas rounded up five mystical places in the country.

It’s wise to note that the general rule when you’re at these places is to maintain proper conduct and not do anything that might be perceived as disrespectful, such as talking loudly or behaving inappropriately.

The quiet and tranquil beauty of Malaysia’s second largest natural freshwater lake betrays the fearsome myth that surrounds it. For a very long time, an Orang Asli legend warned of a dragon-like beast guarding the serene place. Known as Naga Seri Gumum, the mythical animal has also been referred to as “Malaysia’s Loch Ness Monster.”

Over the years, there have been odd reports of sightings of the lake’s gigantic occupant. Scientific study, however, hasn’t uncovered the existence of such a creature. Historians, on the other hand, believe that the lake is the site of an ancient Khmer city. Some even claimed that the city sank to the bottom of the lake and that the dragon is in fact, keeping watch over the doomed citadel under the calm of the waters. According to an old Orang Asli tale, one particular spot at the lake is unnaturally calmer than its surrounding areas and one is advised to keep quiet when passing by.

It’s impossible to mention one without the other. The tale of Princess Santubong and Princess Sejinjang is popular lore among Sarawakians and has many versions. According to legend, both were beautiful celestial beings who, corrupted by vanity, quarrelled incessantly.

One day, the argument escalated and Sejinjang hit Santubong on the cheek with a pestle. Santubong fell and materialised into what is today Gunung Santubong. Before her fall though, Santubong hurled a beam from her weaving loom and cracked the head of Sejinjang, parts of which fell into the sea to become islands, while others fell near Santubong to become Gunung Sejinjang. Today, the outline of Gunung Santubong depicts that of a woman lying down, with a dent on the side of the “head” where the princess had been hit.

Located about 20km away from the town of Kuah is the picturesque fresh water lake on the island of Dayang Bunting. The more popular legend associated to the lake is that it’s the favourite bathing pool of the heavenly princess Mambang Sari. Enraptured by her beauty, the mortal prince Mat Teja courted the princess by means of magic trickery.

Both got married and a very pregnant Mambang Sari eventually retreated to her favourite lake to give birth. Sadly, the newborn died after seven days. Heartbroken, the grieving princess threw the infant’s body into the lake and returned to the heavens. Today, the lake – translated from its Malay name, it means Lake of the Pregnant Maiden – is sometimes visited by women who believe its waters hold fertility powers.

One of the most captivating Malaysian mythical tales belongs to Puteri Gunung Ledang and the mountain she allegedly resides at. Legend says the Majapahit Javanese-Hindu princess set seven near-impossible conditions when Malacca’s Sultan Mahmud Shah asked her hand for marriage. The last term – a bowl of blood from the Sultan’s young son – became a deal breaker for the princess and the king was willing to stab his sleeping son for it.

Deterred by the Sultan’s coldheartedness, the princess disappeared into her abode at the highest mountain (which used to be called Mt Ophir) in the southern peninsula of Malaysia and was never to seen again thereafter. But then again maybe she has, if you take into account the supernatural sightings of the legendary princess by hikers from time to time.

With the recent headlines, this list would not be complete without mentioning Malaysia’s Unesco World Heritage site – Mount Kinabalu. The highest mountain in the country is revered by the Kadazan Dusun people of Sabah and is an integral venue of their beliefs. Their ancestors believe that the mountain’s peak rises to the heavens, thus making it the final resting place of their dearly departed. The Kadazan Dusun also believe that the mountain has been designated as the centre of the world by the great deities Kinohiringan and Umunsumundu.

Another popular legend tells the story of a Chinese prince who – upon slaying a ferocious dragon and retrieving a huge pearl that the beast guarded – married a Kadazan Dusun maiden. However, he soon abandoned her and return to China. Heartbroken, the woman retreated to the mountain. It’s believed that she was soon turned into a stone and her wails can be heard in the wind even till today.