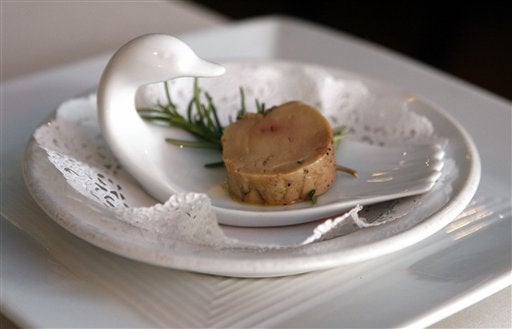 In this Aug. 9, 2006 file photo, a serving of salt-cured fresh foie gras with herbs is displayed at Chef Didier Durand's Cyrano's Bistrot and Wine Bar in Chicago. Restaurants in Brazil's city of Sao Paulo, one of the gastronomical hubs of South America, will no longer be able to serve the delicacy made from the fatty liver of force-fed ducks and geese. AP

SAO PAULO — Diners in Sao Paulo soon will bid farewell to foie gras under a new law that will bar restaurants in one of South America’s gastronomical hubs from serving the luxury appetizer.

Production and sale of the delicacy made from the fatty liver of force-fed ducks and geese will be banned by a law published Friday in the city’s official gazette.

The law will take effect in 45 days to give restaurant owners time to adapt. Consumption of foie gras purchased before the ban or outside of the city will remain legal.

“Foie gras is an appetizer for the wealthy. It does not benefit human health and to make it, the birds are submitted to a lot of suffering,” said City Councilman Laercio Benko, author of the law.

Guilherme Carvalho, one of the directors of the Brazilian Vegetarian Society hailed the new law as a “major accomplishment.”

“The next step will certainly be the expansion of the ban to the rest of Brazil,” he told the UOL news portal.

Alex Atala, renowned chef of the Sao Paulo-based D.O.M., one of the top-ranked restaurants in the world, had voiced opposition to the proposal prior to its passage, calling it “absurd.”

“How can a city regulate what a person eats? Where will it all end?” he told UOL. “Gastronomy is good for tourism and instead of restricting it, they should promote it.”