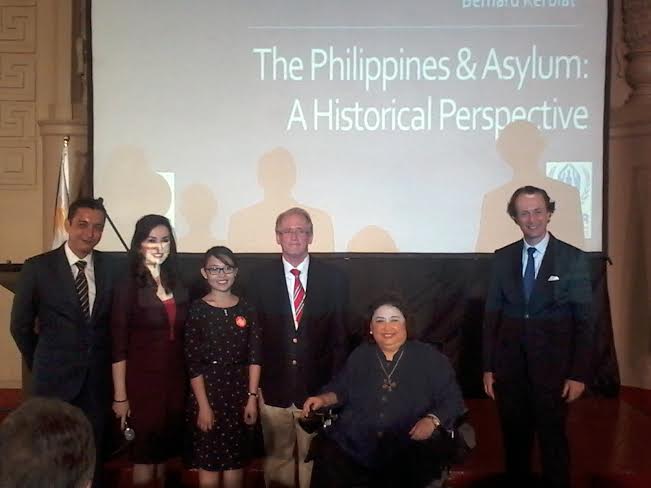 The Russians were here!

AS NATIONS seek for solutions on the refugee problem in the Mediterranean region and in Southeast Asia, a timely lecture on displaced persons was recently held at the Senate Hall of the National Museum (NM) on Padre Burgos Street in Manila.

The event “Philippines and Asylum: A Historical Perspective,” was organized by the Elpidio Quirino Foundation with the United Nations High Commissioner for Refugees (UNHCR), NM and the National Historical Commission of the Philippines in celebration of the late president’s 125th birth anniversary this year.

UNHCR Philippine representative Bernard Kerblat, who was the lecturer, lauded and “highlighted the great achievement that this country had done in support of people escaping from persecution” from 1923 to 2000.

Since 1923, when the first group of White Russians arrived after fleeing the Red Army in Vladivostok, Russia, a total of nine waves of refugees arrived in the country, explained Kerblat.

Aside from the 1923 wave, these were the 1934-1940 wave (European Jews fleeing the Nazis); 1939 (Spanish Republicans after the Spanish Civil War); 1940 (refugees from China after the Japan War in China, end of China Civil War and creation of the People’s Republic of China); 1949 (White Russians from China fleeing Communist rule); 1975-1992 (Vietnamese, Cambodian, Laotian refugees after the fall of Saigon in 1975); 1979 (Iranian refugees during the Iranian Revolution); 1980-1994 (Indo-Chinese refugees due to regime change in Indochina); and 2000 (East Timorese refugees during their fight for self determination).

Kerblat explained that the Philippine tradition of accepting asylum seekers were a little-known fact in the country. He would like to “mobilize historians” to further research the topic.

“I think it [the lecture] is important because this is the heritage of what your ancestors have done, and it is important that historians contribute to researching, documenting, writing about what has happened in the last century, and which continues today with the arrival of individual cases,” he said.

He also invited “the public at large to consider the incredible deeds that their ancestors have done, incredible act of generosity, the humanitarian act and therefore, to acknowledge this and publicize it.”

“I think it is important that this country fully appropriate the very positive heritage from their ancestors.”

The UNHCR official also lauded the country in its position of accepting the Rohingya refugees from Myanmar and Bangladesh.

“The Philippines took a very principled position, reiterating its readiness to uphold the right for asylum in the event that Rohingyas were to come to the Philippines,” he said.

“The Philippine acted in a very positive, mature way. Not pointing fingers, not naming and shaming but simply saying, Let’s acknowledge that we have a problem that we collectively, all the concerned nations, have to deal with,” he added.

Kerblat also said the “UNHCR is very pleased to note the very positive principal statement issued by the government of the Philippines even if it is not directly affected by these crisis.”

The topic that was widely discussed in the lecture was the arrival of the second wave of White Russian refugees escaping Communist rule in China and their subsequent stay in Tubabao Island, Guiuan, Eastern Samar, from 1949 to 1953.

This is a study being conducted by Guiuan native and Quirino Foundation senior researcher Kinna G. Kwan for her master’s thesis in Cultural Heritage Studies at the University of Santo Tomas Graduate School.

The refugees were not entirely Russians but of different nationalities—12 in all, explained Kwan. There were also Armenians, Estonians, Germans and Austrians, Turko Tatars, Ukrainians, Lithuanians, Czechs and Yugoslavs, Polish, Latvians, and Hungarians.

A total of 6,000 refugees lived in the camp run by the International Refugee Organization (predecessor of UNHCR) but manned by the Russians themselves, explained Kwan.

She said the White Russians contributed economically and culturally to the people of Guiuan that, until now, there are residents who are still good in playing piano and ballet. These were taught by the refugees to the locals during their stay.

According to oral history, the refugees were allowed to hold Orthodox Masses inside the Immaculate Conception Church of Guiuan. In exchange, they would serve as choir during Catholic Masses.

Since they lived only in tents and temporary structures, there are no traces of their existence in Guiuan except for the Cyrillic graves in the town’s cemetery.

After staying for about four years, the refugees were resettled in 12 countries, including Australia, US, Brazil, Dominican Republic, France, Belgium.

The town has already coordinated with the NHCP for the installation of a historical marker for the refugees that Guiuan locals call Tiempo Ruso, said Kwan.

White Russians are those who were opposed to the Socialist Revolt of 1917, in contrast to the Reds who supported it.

It was President Quirino who was instrumental in accepting the refugees when no one would like to have them in.

“Many countries including the United States responded sympathetically [to the refugees’ plea] but only one gave the reply they desperately needed—the then very new Republic of the Philippines led by President Elpidio Quirino,” noted Kwan.

Ruby Quirino Gonzalez, Quirino Foundation trustee and granddaughter of the president, said Quirino accepted the refugees because he “had a great sense of and respect for humanity.”

“He thought we had to rise [after the devastation of World War II] by giving and not by asking,” she added.

When asked about the importance of her grandfather’s move, Gonzalez said the “most significant is, you gave dignity and you gave life and protection to 6,000 individuals and their generations after that.”

One of those who attended the lecture was Maria Generosa Kibanoff Canlas-Analupa, one of the descendants of Alexander Kibanoff, who was part of the first wave of White Russians from Perm, Russia.

Analupa, a teacher from Quezon City, said she was overwhelmed by the lecture since it was “something very actual and very informative.”

She said she was hoping that the lecture and other public events would help her find her grandfather’s youngest sister, Olga, who came to the Philippines during the second wave.

Analupa added that public lectures on the refugee issue should educate young generations that the Philippines had been accepting refugees across the decades and had always come in the aid of distressed foreigners in the spirit of humanitarianism.