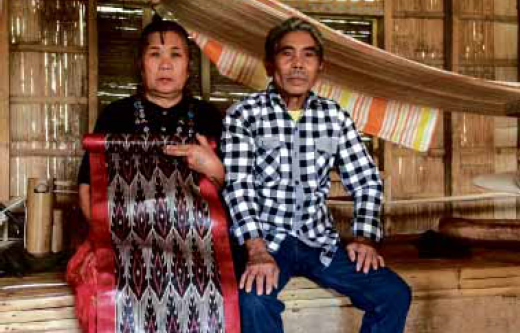 SAMPLE of T’nalak woven by one of Lang Dulay’s 7 granddaughters, all of whom she taught how to weave their dreams into the T’nalak designs. BLANCHE FERNANDEZ

LAKE SEBU, South Cotabato—The noise of the habal-habal’s engine broke the silence in Sitio T’bong in Lake Sebu, where the weaving school of the late T’boli Dreamweaver Lang Dulay stood above the dusty road often traveled by tourists.

When she was alive, Lang Dulay, who was declared a national living treasure in 1998, was one of the biggest tourist attractions of South Cotabato.

She suffered a stroke early this year and never recovered. She died on April 30. She was 91.

Two months after her passing, it became clear that Lang Dulay left behind not only a nation in need of cultural torchbearers but also a large family that had been financially dependent on her.

The Dreamweaver was the primary breadwinner of her family—her 68-year-old son, 18 grandchildren and 40 great-grandchildren all of whom are now struggling to cope with the loss.

“We lost much when grandmother died, because it was she who paid for our children’s schooling,” said Anita Tagacay, 46, the eldest of seven granddaughters Lang Dulay had taught to weave.

Anita said her two kids got to college with the help of her grandmother.

Now that Lang Dulay—and the P30,000 monthly support that she used to receive from the government—is gone, Anita fears she cannot put her children through school.

The weaving school or center has not seen many tourists since Lang Dulay’s death. When she was alive, at least three tour groups stopped at the center every day.

“Now we get just one group a day. Sometimes the tourists don’t buy anything from us. They just take pictures,” said Marilyn Dulay, another granddaughter of Lang Dulay.

“When grandmother was alive, her work commanded P1,200 per meter. When we had no sales, she gave us money for our needs,” she added.

When we arrived, the children at the sari-sari store across the road from the school stopped playing, eyeing us curiously.

“Visitors,” one of the boys yelled, disappearing into the house.

It was a holiday, but we were the only tourists.

Inside the center, a somber-looking woman in a T’boli skirt half-smiled at us. She was Sebulan Dulay, one of two wives of Lang Dulay’s lone surviving son.

Sebulan, a teacher at the weaving school, did not speak much, but she perked up when the habal-habal driver told her, in the local dialect, that I was interested in T’nalak, the beautiful fabric woven by the T’boli   women and for which Lang Dulay became known.

Within five minutes, three other women, all granddaughters of Lang Dulay, entered the center and offered their own weaving. Another brought beads and brass products.

“Please buy this, ma’am,” they implored, rolling out bolts of T’nalak they had woven.

The granddaughters had thought of finding other ways to make a living, but having dropped out of school early to learn to weave T’nalak, there was not much they knew.

“It’s hard to be a maid in Manila. We don’t know anyone there,” said Marilyn, a single mother. “Besides, we don’t have money to go there.”

When I asked her why she would think of working as a maid in Manila, she said there were not many options for people like them who had little schooling.

“That’s the only job we can handle. For other jobs, we will be asked for many papers that we don’t have,” Anita said.

As the granddaughters told their stories, Sebulan quietly left and returned with a small basket labeled “donation box.” She placed it on a table in front of me.

We thought the gesture was rude and desperate, and I wondered if Lang Dulay would have done such a thing even in her greatest need.

Later, Lang Dulay’s son, Florencio, joined the women and said to me: “Ma’am, my two children need money for the board exam. They are training to become teachers.”

“Everyone mourns Lang Dulay but I think more so her family because she was the breadwinner,” said Maria Todi, a T’boli artist who runs the School of Living Traditions in Lake Sebu.

She said that among the T’boli, the weavers are the providers, which means even their husbands, usually farmers, are dependent on them.

“The family relies on the weaver, especially if she can make certain designs that are difficult,” Todi said.

Having learned to weave at 12, Lang Dulay created and mastered about a hundred designs that she culled from her dreams, stories from her ancestors and elements in nature.

She strove to pass these on to young T’boli women, understanding that T’nalak weaving was crucial to preserving the tribe’s culture, as this was how the T’boli told their stories as a people.

“The lives of T’boli women are meaningless if they don’t know how to weave T’nalak,” Lang Dulay told Izah Morales, general manager of Explore8 Travel during one of her four visits to Lake Sebu.

Lang Dulay, who had two sons, was so determined to pass on the craft to her granddaughters that she barred them from working in the fields and even from going to school so they could spend their days learning to weave from her.

Noemi Dulay, whom we met during our visit, dropped out of school when she was in Grade 1 because her grandmother wanted her to concentrate on weaving.

Now 44, Noemi can barely read or write but she makes excellent T’nalak, perhaps the best in the family.

Noemi can do 40 designs, more than those done by the other granddaughters but still a far cry from Lang Dulay’s 100.

“Grandmother started it all, we’re just carrying on the tradition,” Marilyn said.

As the younger Dulays and many other T’boli women continue to weave, their biggest question is whether people will also continue to come and buy their T’nalak now that the celebrated Lang Dulay is gone.

Will the T’boli’s dreams die with the Dreamweaver?
RELATED STORIES