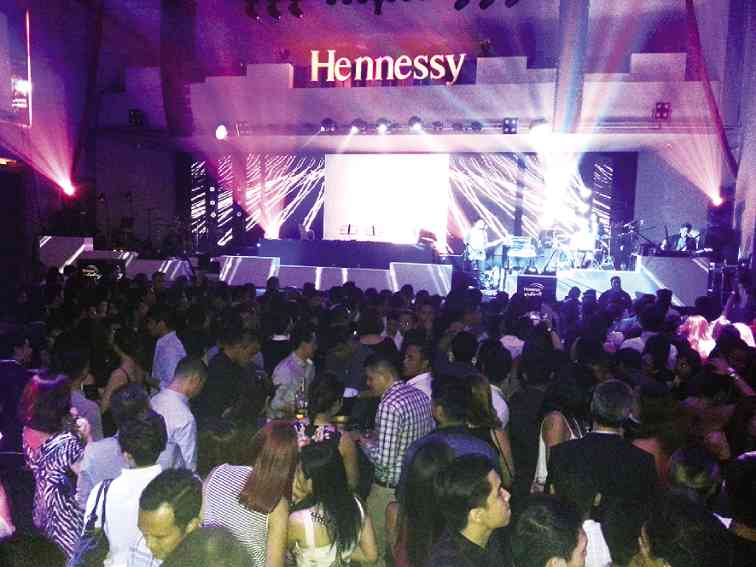 A capacity crowd of about 2,000 stood cheek by jowl while sipping cognac and listening to Filipino band Up Dharma Down (UDD) recently at Valkyrie in Bonifacio Global City.

The event, part of cognac brand Hennessy’s Artistry series, highlighted its “art of blending” campaign which promotes the appreciation of Hennessy as a cocktail with music.

In a previous Artistry gig, held at Prohibition Liquor Lounge in Greenbelt 3 which also featured UDD, we tasted Hennessy VS (“very special” or brandy stored at least two years in a cask) mixed with ginger ale for the first time. It was divine.

And so at Valkyrie we ordered the same and began to really appreciate mixed drinks (though we also love Hennessy on the rocks).

The band was likewise fine—its rhythm section adapting a more pronounced beat to “blend” with the venue’s dance club vibe.

Everything was going well until heavy second-hand cigarette smoke from practically everyone within spitting distance seeped into our lungs, forcing us to flee. (It took us one week to recover from cough.)

Smoking inside air-conditioned places should be banned.

The Oz Bar at the roof deck of Holiday Inn & Suites in Glorietta 2, Makati, was the venue of a sneak preview of the talents of pop singers Jessica Reynoso and Miguel Antonio—two young artists recently signed by BMBX (pronounced “boombox”), Apl.de.ap’s talent management company.

Apl himself was there, proud of his wards; while Reynoso’s father is African-American and Antonio’s dad is Singaporean, both their moms are Filipino.

Reynoso showed an interest in singing at age 5 and started joining contests at 9. Followers of the reality TV singing tilt “The Voice of the Philippines” will remember her as one of season 2’s finalists under coach Apl.

Similarly, Antonio found himself singing as a child, turned on initially by Led Zeppelin’s Robert Plant (!), one of the artists his mom listened to.

At Oz, Reynoso jammed with Apl on a bouncy number; later she and Antonio shared vocals on “Hope of One Voice”—a song written by Elim Chew, the Singaporean founder of the clothing brand 77th Street. The tune has been used in a benefit event, “Rebuild Philippines,” held in Los Angeles.

Apl told Inquirer that his plan is to get US visas for Reynoso and Antonio so they can collaborate with other artists. “She can be a Pinay Beyoncé,” Apl said of Reynoso.

A nice place to dine before heading out to a gig is Lucky’s Burger & Bar in McKinley Hill, Bonifacio Global City.

On a Wednesday night we tried its signature Lucky Burger (P180), which was quite messy to eat, its juices seeping down our hands. But it tasted great.

It was also our first time to munch on beef patty with “streaky” or fatty bacon, not very healthy but not very bad either, especially if eaten occasionally.

Yet we noticed that most of the millennials who flocked to Lucky’s that night were in fact ordering Crispy Bacon & Egg with garlic rice.